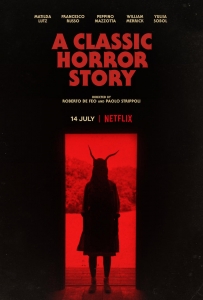 BASICALLY…: A group of strangers become trapped in the woods where they encounter a horrifying evil…

So far, I’ve yet to be really impressed by Netflix’s Fear Street trilogy; both entries thus far (the third is due out at the end of this week), despite clearly going over better with further critics and audiences, have for me felt more like okay homages to slasher films like Scream and Friday the 13th than legitimately strong horror movies in their own right. I suppose it is for people like me, then, that Netflix has also released A Classic Horror Story around the same time, so that we have something to latch onto that can be considered a superior product over the more mainstream horror trilogy.

The Italian horror film, from directors Roberto De Feo and Paolo Strippoli, is a much more ambitious (in concept, at least), intimidating, and original movie than any of the Fear Street movies combined (including the upcoming third one, which I know hasn’t yet been seen but, let’s be honest, it most likely won’t be on this movie’s level either). I was fairly surprised by A Classic Horror Story in how well it established tone, atmosphere, character, and especially some of its horrific violence, which is enough for me to recommend it higher than the other Netflix horror movie(s) out at the moment.

We begin the story as a young woman named Elisa (Matilda Lutz) hops aboard an RV as a rideshare passenger along four other strangers: engaged couple Mark (Will Merrick) and Sofia (Yuliia Sobol), aspiring filmmaker Fabrizio (Francesco Russo), and sullen doctor Riccardo (Peppino Mazzotta). During their journey, the RV suddenly crashes by the road; the next morning, everyone wakes up to find that they have been mysteriously transported to the middle of nowhere, with zero phone reception and a creepy cabin mere feet away from them. Very soon, the group discovers that the cabin belongs to a sinister cult that intends on making human sacrifices, which of course spells bad news for them and the young girl Chiara (Alida Baldari Calabria) that they’ve rescued from the cult’s grasp.

At first, you may be thinking that this is just following the same horror movie formula that has graced so many other movies like this – particularly, the one where a bunch of strangers (mostly young people) get stuck at a cabin in the woods where they’re picked off one by one by an evil force – and you’d be correct in thinking that. However, what it does with said formula is most surprising, and really feels unexpected because it comes as soon as you think that you’ve figured everything out, only for it to turn the tables on you once again. I don’t want to say much about what ends up happening in this film, but imagine The Cabin in the Woods if it were suddenly blind-sided by The Disaster Artist; if you know anything about those films, then you might be able to piece together what the big twist is, but even then, be honest: did you really expect a film with this kind of build-up and legitimate suspense to still go in this particular direction?

That being said, I can completely understand why some people would not be as much into this movie or especially this ending as I clearly am. If its incessant overuse of familiar horror tropes are enough to put you off, or if the ending is perhaps too stupid for you to fully accept, then fair enough; but again, what I appreciated about this film was that it not only plays around with one’s expectations of what a horror movie should contain, but also works well enough as an intriguing piece of filmmaking on its own merits, all while still remaining fairly intense and surprising. It is a very well-made film, combined with some excellent cinematography that indulges in a use of colour that would make Dario Argento proud, and also creates an effective piece of atmosphere as we find ourselves more and more lost in this vast woodland era. Shots of empty, deserted cars played out over virtual silence, or expansive views with the creepy cabin firmly in the background, all are captured by filmmakers and cinematographers who at the very least know how to deliver natural chills based on mood and atmosphere alone, and no matter what your thoughts are on this film there shouldn’t be much debate that Roberto De Feo and Paolo Strippoli have a strong hold on how best to visually deliver, well, a classic horror story such as this.

It’s also good at sucking you in to the absolute terror that these people experience, because it does a fairly good job at making you like and root for these characters as they desperately try to find a way out of their situation. Lead actress Matilda Lutz is very much the wide-eyed protagonist similar to, say, Jessica Harper in Argento’s Suspiria, and it is a part she plays well because she has a warm enough presence to make you sympathise with some of the stuff her character’s going through. Other characters who might otherwise be the unbearable comic relief or the rowdy and vapid party animals are given a decent amount of humanity to them, feeling much more like actual people rather than just the mere caricatures that they are originally introduced as; later reveals about some of them do come out of nowhere, but again they feel well within the spirit of the people we were originally introduced to. The fact of the matter is, you know and care enough about these people to not necessarily want them to die, and as it moves into its final reel you are absolutely rooting for at least one of them as they take matters into their own hands.

For the most part, I was honestly enjoying the journey that this movie was taking me on, and then when it hits that final hurdle I was all the more impressed because it was incorporating themes and rather meta concepts that I really had no idea would even be part of what seemed like more of a straightforward horror. You can absolutely make the argument that much of what’s in this film has been done many times before, but the execution was impressive enough that it left me far more invested in this story and characters way more than the Fear Street movies have done thus far. I know that A Classic Horror Story won’t be seen by nearly as many people, but if you’re curious then by all means queue this nice little surprise up on Netflix once you finish that trilogy.

A Classic Horror Story is an impressively made and entertainingly unpredictable stab at a well-trodden horror formula, with fun twists and decent enough characters to keep you invested in its familiar but ambitious efforts.

A Classic Horror Story is now available on Netflix.