A Christmas Gift from Bob (Review)

A Christmas Gift from Bob (Review) 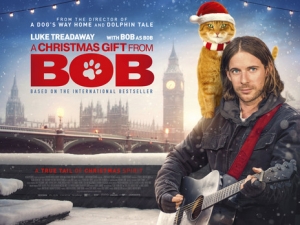 Among the many stars to sadly pass away this year, Bob the cat – the loyal companion to former drug addict and busker James Bowen, and the inspiration for many of his best-selling books – is surely a blow to feline-lovers everywhere. Though the ginger tabby may no longer be accompanying Bowen on his own adventures, Bob’s legacy lives on in Bowen’s inspirational books, and now the two feature films that have been inspired by said novels.

But while 2016’s A Street Cat Named Bob was merely okay, nothing more than serviceable fodder for anyone with a cat to put on in the background, the follow-up A Christmas Gift from Bob – which borrows elements from Bowen’s books A Gift from Bob and The Little Book of Bob – is a warmer, sweeter affair with a fair mix of cheese thrown in for good measure.

In the film, we are reintroduced to Bowen (Luke Treadaway) and Bob (as himself) after his first book has hit the big time, but Bowen is struggling to come up with an idea for a new book. He soon recounts another Christmas not too long ago, when he and Bob were still struggling to survive in their makeshift accommodation, relying on busking and selling copies of The Big Issue for income, but most of all relying on each other for companionship. Over this period, Bowen and Bob face numerous challenges, from illnesses to animal welfare agents looking to separate them, but as per the festive season a little love and support from friends soon proves to be a reliable source for both man and cat.

It’s mostly an inconsequential film, with many of the main problems more or less being resolved quickly by a simple conversation, and the ones that aren’t don’t exactly have much weight to them because, due to the framing device, we already know what the outcome is going to be. In a sense, that does leave this film with little reason for its existence, other than to capitalise on both the popularity of Bowen’s books and the Christmas season, which is hardly a good enough excuse to make a follow-up that nobody really asked for.

The cynicism, however, stops right there. There is clearly heart put into this story, with the central pairing of Bowen and Bob being – as it was in the previous movie – an endless source of adorableness with their easy chemistry, something that makes me think that Bob (in his reasonably old age at the time of filming) probably did confuse the real Bowen for Luke Treadaway at points. Directing duties this time round go to Charles Martin Smith, of past animal-centric movies like Dolphin Tale (as well as its own sequel) and A Dog’s Way Home, and he certainly has a way of making family-friendly stories about non-humans feel as though they have been genetically designed to appeal most to lovers of the animal in question, whether it’s dolphins or dogs or, indeed, cats. There’s plenty of the late Bob on display here, even when he’s dressed in a little Santa costume (which he does NOT look happy to be in), and Smith milks whatever he can out of the cute tabby’s appeal to pleasing effect for the cat-loving audience, from fish-eye lens close-ups to mercifully not giving the animal an obnoxious internal voice like he did on A Dog’s Way Home.

As for the human performers, Treadaway delivers a sensitive turn as Bowen and easily leads the charming and likeable supporting cast, among them Phaldut Sharma as a kindly shopkeeper who has a couple of the film’s most heartwarming scenes. Notably, actress Ruta Gedmintas (Treadaway’s real-life partner, who played Bowen’s love interest in the previous film) is nowhere to be found here, which comes as a relief because her character was one of the weakest parts of A Street Cat Named Bob; instead, she’s replaced by Warrior Nun actress Kristina Tonteri-Young as a slightly different character, who’s more likeable than Gedmintas was but really isn’t given a whole lot else to do either. You do get the odd bit of pantomime over-the-top acting, like a bullish animal welfare agent who for whatever reason has it out for Bowen and his cat, and in one early scene a well-spoken politician who makes David Cameron sound like Danny Dyer, but by and large the cast deliver the good-hearted feels that contribute to a sweet and uplifting story about a man and his cat at Christmas.

It certainly isn’t perfect, with a script that contains numerous contrivances in the name of easy and easily solved drama, and as before there’s really little reason for it to exist outside of keeping the brand name in the public consciousness, but to harp too much on its criticisms somewhat defeats its intentions. It is intended to be a good-natured, inoffensive and family-friendly festive film that anyone can find joy in, whether they’re a fan of cats or not, and in that spirit it manages to bring a sense of cheer and goodwill with its simple messages of being kind to others and the importance of giving over receiving around this particular time of year. Families will certainly get a lot out of it, as well as its predecessor, and cat-lovers will especially be highly pleased with the attention its dearly departed furry star receives here.

It’s perhaps not destined to become a new festive classic, nor does it even get as sentimental and genuinely moving as the Paddington movies, but A Christmas Gift from Bob is the nice, appreciative present we didn’t know we needed in 2020.

A Christmas Gift from Bob is a sweet and warm-hearted continuation of the adventures of James Bowen and his cat companion Bob, which won’t receive any marks for originality or its occasionally contrived script, but makes up for its shortcomings with a nice message and likeable characters which feels just about right for the festive season.

A Christmas Gift from Bob is now available on Premium Video on Demand.