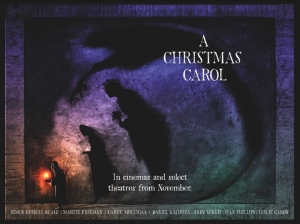 BASICALLY…: A radical new version of the classic Charles Dickens tale, incorporating abstract theatre and dance to tell the story…

What more is there to say about Charles Dickens’ A Christmas Carol at this point? It’s one of the most famous stories in the world, its characters and themes known by countless audiences who can tell you just about every single plot point without even having to think about them. It seems that with every major film or TV adaptation, there’s less and less that can be discussed beyond what had already been talked about in the last one, and the one before that, and so on, because a lot of them just stick to the core foundations of the well-known story and rarely venture outside the box to make a timeless tale feel new and exciting again.

This latest big-screen version of the story, though, might perhaps be the closest in a long while that the story has been given a radical shake-up in its presentation; the story’s the same, because of course it is, but documentary filmmaker Jacqui Morris – who directs alongside her brother David Morris – has adopted a very stylish and experimental method of telling it that is both ambitious and intriguing. Does the bold new style pay off? In some ways, yes and no; there’s merits to the method, but also a few missed opportunities.

The very basic framing device is of a Victorian family putting together a toy theatre, and as Siân Phillips (as, presumably, the grandmother) tells the story of A Christmas Carol to the young children, we suddenly enter an imagined world where the backgrounds and props are illustrated as they are in the toy theatre, and designed as though they are apparatus you would find in a typical stage production. The characters are portrayed on-screen by interpretive dancers, who wistfully sway and pirouette along with Phillips’ narration, as well as the voiceovers of higher-profile actors reading aloud the characters’ dialogue; Ebenezer Scrooge, for example, is voiced by Simon Russell Beale, while a male dancer – under choreographer Russell Maliphan’s guidance – “acts” the part visibly. Other voiceovers include Martin Freeman as Bob Cratchit, Daniel Kaluuya as the Ghost of Christmas Present, Carey Mulligan as Scrooge’s former love Belle, and Andy Serkis as both Jacob Marley’s ghost and another minor character later on in the narrative.

It’s an unusual film in a lot of senses, certainly unconventional as I’m sure was the point, but at its core it’s simply just doing A Christmas Carol again, only with an a lot more dancing. The rules of film dictate that there needs to be a story and characters worthy enough to keep your interest, and you can’t just rely on style alone to serve as a bountiful substance. Since this is merely another re-telling of the same classic story we’ve all heard time and time again every Christmas, there is nothing new to these characters or this story that hasn’t been portrayed in other film versions of Dickens’ tale, therefore your interest in this version wains as you think about other adaptations that you’d much rather be watching than this one (The Muppet Christmas Carol, obviously, being one of them).

Jacqui and David Morris undoubtedly bring a lot of theatrical flair to the dreamy and surreal visuals, but you can’t help but wonder if this particular production would be far better suited for the stage than the screen. Of course, this is an impossible request for 2020, given that live performances are still not exactly favoured, although that doesn’t seem to be stopping them from literally screening this film in select stage theatres across the country, so why not go the full hog and perform it live, National Theatre-style? Beyond that, though, the stage influences are very apparent in this film, from entire sets being designed to specifically replicate ones you’d find in your typical local amateur production of A Christmas Carol, to the dancers who, despite being very refined and elegant in their moves, are barely given much chance to make good use of their physical skills. Even the high-profile voice cast seems very subdued; they are mostly just reading the lines, as though this were an Audible recording of the story that they just happened to get Oscar-nominees like Carey Mulligan and Daniel Kaluuya on-board for, with the dancers there to provide a visual aid for the audio.

When you look at the numerous film adaptations of this very frequently adapted story, you have to admire the ambition that the Morris duo brought that not many other versions would have. Its style alone is bound to leave people just a little bit curious to see what it’s like, and while they get just the same old story they also get something which, to my knowledge, has not yet been tried in a film adaptation before. Overall, though, it’s an experiment with mixed results; because it is just another retelling of A Christmas Carol with nothing major added to the plot or the characters, there’s not much to get sucked into other than the heavily theatrical style, and even then there’s flaws because all you’re thinking about is how much more effective this may be if performed live. It is certainly fascinating to watch, though, because the style is so unconventional that you’re at least interested to see how far they can stretch it until the happy ending.

A Christmas Carol takes a very unconventional stylistic approach to the classic story, which is intriguing enough in its theatricality to serve as a fascinating one-off, although there isn’t anything that’s new or fresh added to the plot or characters to warrant such a different presentation.

A Christmas Carol is out in cinemas across the UK on Friday 4th December 2020.