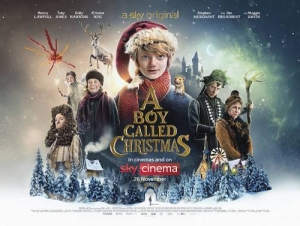 BASICALLY…: A young boy named Nikolas (Lawfull) embarks on a grand adventure to the snowy north, where he meets his destiny…

It seems that we get an origin story for Santa Claus every Christmas, from the cult classic Santa Claus: The Movie to the Oscar-nominated animated feature Klaus, so the fact that we’ve got another one this year in the form of A Boy Called Christmas shouldn’t come as too big a shock. However, before you can ask yourself exactly how many origin tales a timeless figure like Santa needs (answer: not enough), when there’s enough charm and whimsy to give its audience a pleasant, if not completely unique, enough time watching it, then by all means keep the prequels coming.

A Boy Called Christmas is based on the children’s fantasy book by Matt Haig, and adapted by director and co-writer Gil Kenan (who most recently co-wrote Ghostbusters: Afterlife) who – via a framing device straight out of The Princess Bride, wherein Maggie Smith is entertaining a trio of kids who have just lost their mother, and are understandably not in the Christmas spirit – tells the story of a young boy named Nikolas (Henry Lawfull), who lives in the woods of a Finland kingdom with his father (Michiel Huisman). When the king (a spirited Jim Broadbent) offers riches to anyone who can bring hope back to the miserable kingdom, Nikolas’ father sets out in search of the fabled elf city of Elfhelm, leaving Nikolas in the hands of his cruel aunt Carlotta (Kristen Wiig). When his father fails to return, Nikolas starts to journey toward the snowy north in search of him, with only his talking mouse Miika (voiced by Stephen Merchant) and a reindeer named Blitzen for company – of course, he does manage to come across Elfhelm, which has fallen under dictatorship by Mother Vodol (Sally Hawkins), and it is now up to Nikolas and his friends to set things right.

As far as Father Christmas origin tales go, A Boy Called Christmas is a pretty pleasant one to watch. It has its heart firmly in the right place, features some decent morals for the young’uns (which Kenan and co-writer Ol Parker, he of Now Is Good, The Best Exotic Marigold Hotel and Mamma Mia! Here We Go Again, deliver with crowd-pleasing earnestness), and knows when to downplay the comedy in order to get to the core of the drama, which happens a little more than you may think in a movie like this. It feels like a movie that was made with a good amount of passion for this material, with only the occasional hint of cynicism to appease those looking out for clues towards particular Christmas traditions (ever wondered where Santa got his red hat from? Or how Christmas crackers came into existence? This film has you covered), but it’s nowhere near as irritating or in-your-face as it has proven to be in past similar movies.

The plot, characters and overall themes are simplistic to an almost fault, aimed much more toward a younger audience than anyone else, which could put off some older viewers hoping for greater emotional depth or complex storytelling. However, that really isn’t the kind of film that A Boy Called Christmas is even trying to be, with it being much more focused on just being this pleasant, harmless family film with tinges of darkness (at one point, Wiig’s character pulls a Fatal Attraction with young Nikolas’ treasured turnip toy, which is the closest this movie comes to Gremlins-style dark festive comedy) and ultimately a good set of values for as many people as possible to absorb. Not every aspect lands accordingly – although young lead Henry Lawfull does fine as likeable Nikolas, he’s perhaps not strong enough yet as an actor to carry a movie like this – but there is a firm likeability in nearly every other corner that does make it at the very least endearing for a watch alongside the family.

Fun performances from the likes of Jim Broadbent, Sally Hawkins and Kristen Wiig – the latter two in particular having lots of fun chewing the scenery as over-the-top villainous characters – as well as some cutesiness with Miika the CG mouse and Stephen Merchant’s sardonic vocal turn, also help to propel A Boy Called Christmas above some of the more average Christmas fare, and could very well contribute towards it being a future festive classic amongst children and parents. Time will tell if the film is indeed destined for Yuletide timelessness – after all, it took Elf a little while for it to become a celebrated seasonal classic, so there is a realistic chance this one could be too – but for now, we’ll settle for a pleasant family adventure that knows what it is, when to dial itself down, and how to appeal to as wide an age group as it possibly can.

Plus, if we’re talking about Christmas-set family movies released partially to streaming, it beats the baubles out of Home Sweet Home Alone any day of the year.

A Boy Called Christmas is a pleasant family adventure that knows exactly what kind of film it is, bringing plenty of charm and warmth to a story that might not be the freshest Christmas story out there, but will certainly keep kids of all ages reasonably entertained.

A Boy Called Christmas is now available to stream on Sky Cinema and NOW.