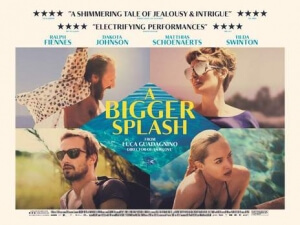 BASICALLY…: The holiday of rock star Marianne (Swinton) and filmmaker boyfriend Paul (Schoenaerts) is interrupted by the arrival of former lover Harry (Fiennes) and his daughter Penelope (Johnson)

A pseudo-remake of the 1969 film La Piscine, Guadagnino re-teams with his I Am Love star Tilda Swinton and casts her as a Bowie-type rock star (her on-stage make-up eerily resembles that of the late music icon) named Marianne, who is recovering from throat surgery in an Italian villa with Paul (Matthias Schoenaerts), her filmmaker boyfriend. Almost immediately, their happiness is bombarded by the unexpected arrival of Harry (Ralph Fiennes), Marianne’s former producer and lover, and Harry’s recently-discovered adult daughter Penelope (Dakota Johnson); both end up working their way into the couple’s desires and manage to alter things to a point where it becomes near-unrecognisable.

It’s easy to understand why anyone, let alone Swinton and Schoenaerts, would be put off by Fiennes’ constant enthusiasm and presence, like that one guy who drinks way too much at a party but you somehow can’t get rid of him, but his endless appreciation for life is eerily charming and aggressively entertaining; Fiennes ends up stealing the entire movie as a result, even when you learn a bit more about his character and realise that, by standards, he’s not a particularly good guy. To be fair to him, however, all four of them are extremely flawed in their own ways; Swinton and Schoenaerts act like that couple you appreciate for what they do but don’t think much of them as people, and Johnson – coming a close second in standing out amongst the quartet with a quiet but never boring performance – is the typical privileged young adult who couldn’t care less about almost anything around her. All four are excellent, even though Fiennes outshines them all, and they revel in their characters’ pretence and uncomfortable nature.

Guadagnino’s style contrasts heavily with the style of another Italian director that recently made an English-language film, Paolo Sorrentino; while the latter certainly takes a smoother arthouse approach as can be seen in something like Youth, Guadagnino is a much more energetic filmmaker as he uses raw camera work and sometimes rapid-fire editing (in one instance, we cut to closer and closer images of a passport photo) to make the scenery and its content a little harder to swallow, but it’s in keeping with the uncertain nature of the rest of the film so it fits near-perfectly. Much like Sorrentino, Guadagnino’s style might be off-putting for some, but it definitely provokes the necessary emotional reactions when they’re called for.

It’s in part due to the strong performances of its four central actors, as well as Guadagnino’s direction, that we hold interest to where all this madness is eventually going to lead. Each one of them has certain desires, and whether or not they are fully carried out by the end is entirely up for debate, but it moves at a certain pace that makes you more and more anxious about the inevitable end point, which is teased by the characters’ questionable actions that involves a great fare of nudity from each and every single one of them. When it does reach that certain point, however, the film completely shifts into something entirely different, and plays out like an extended epilogue of a morality play that goes on for longer than necessary rather than a fitting conclusion to everything we’ve just witnessed.

Until then, however, it’s a well-played-out erotic drama that revels in both the eroticism and the drama, and keeps you nervous about who’s going to come out as the lesser of two (or, in this case, four) evils by the time the final credits start to roll. It’s not for everyone, or at least anyone who doesn’t particularly like this kind of style or even tone, but there’s one thing everyone can agree on: A Bigger Splash is a far better tribute to the French New Wave erotica films of the 20th century than the one that Angelina Jolie-Pitt could manage.