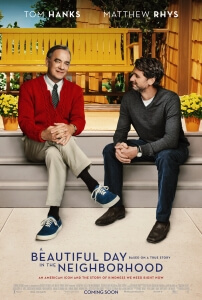 This review is of the cut shown at the BFI London Film Festival in October 2019 – the UK release date is currently listed for December 6th 2019.

“Don’t ruin my childhood,” a character says to Matthew Rhys’ cynical journalist when he reveals his next subject is none other than Fred Rogers. It’s a request that anyone who grew up with him can relate to; Rogers, the beloved host of children’s show Mister Rogers’ Neighbourhood, was well-known for his calm, considerate, and most of all kind approach towards his audience and just about everyone he ever came across, and the thought of someone as warm-hearted having his genuine personality be picked apart is akin to finding out that Santa Claus isn’t real.

Your childhoods are safe, though, as Marielle Heller’s extraordinarily emotional A Beautiful Day in the Neighbourhood is a fitting testament to the power of Rogers’ kindness, and a powerful mediation on the importance of love over hate that we depressingly need now more than ever.

Set in 1998, we follow Rhys’ Lloyd Vogel – loosely based on journalist Tom Junod, who wrote the Esquire article this movie is based on – whose weary and bitter view of the world is exacerbated by the trials of being a new father as well as the unwanted resurgence of his own dad (Chris Cooper) in his life, years after he abruptly left his family when Lloyd’s mother fell ill. Nonetheless, he is assigned to write a profile on Fred Rogers as part of Esquire’s focus on heroes, and at first Lloyd intends on digging deep into his subject to find something juicy and devious to write about instead (that, incidentally, is when the “don’t ruin my childhood” line comes in). However, upon meeting Rogers – played by Tom Hanks, in what is easily the best casting decision of the year – and seeing how he is a genuinely kind-hearted person to each and every person he comes across, Lloyd’s mind is effectively blown, and so begins a personal journey for the journalist to re-evaluate his relationships with his family, and most of all himself.

Heller – now three-for-three following previous scores with The Diary of a Teenage Girl and Can You Ever Forgive Me? – has made a film that completely inhabits the sweet and thoughtful personality of Fred Rogers, even having the film’s framing device be that of an episode of Mister Rogers’ Neighbourhood, wherein Hanks as Rogers introduces Lloyd’s story to the audience (as a extra touch, most of the film’s exterior shots are created through miniature figurines as on the show), and later participates in it as a mere supporting player. The director and her star have clearly done their homework as the overall gentle tone matches that of the eponymous show, even in scenes of truly heavy drama surrounding the personal life of Rhys’ character, and it is such a heart-warming thing to watch unfold that even I was starting to get a little teary-eyed thanks to the power of its incessant kindness. It’s a film that will have you feeling all sorts of emotions all the way through, with enough power in its heart to run an entire city block, and the movie is so wonderfully written and directed that every piece of emotion is entirely earned.

A lot of the attention will most certainly be on Tom Hanks’ turn as Mister Rogers himself, and for good reason; it’s one of the actor’s strongest performances in years, in an instance of perfect casting that sees a well-regarded Hollywood nice-guy play the kind of all nice-guys to utterly dazzling, and heart-warming, effect. However, Matthew Rhys should not be overshadowed by Hanks’ wonderful turn; Rhys’s character has an incredibly emotional arc that sees him slowly open himself up and learn to not hold so much of a grudge towards people, and the actor completely nails scenes where he’s acting mainly with his eyes, causing you to see a wounded animal underneath his five-o’clock shadow and battered face (caused by an early altercation at a family wedding). Both actors work off of each other extremely well, and they will have you weeping for entirely different reasons due to the powerful and raw emotional nature of their performances.

With its heavy themes of kindness and learning to give and accept love, this is a film that could have so easily been executed in such a sappy and cheesy manner that would have rendered its genuine messages null and void; but there isn’t a cynical muscle in the film’s heart, with Heller approaching the material with as much thought and consideration as Rogers himself would have done, and by embracing the human need for love and compassion she has made a film which the man himself, were he around today, would have been very much proud of. Between this and last year’s hit documentary Won’t You Be My Neighbour, it seems that the world is in need of a resurgence of Fred Rogers in their life, and with both being such wonderful dives into the pure soul of the television personality it’s a resurgence that is entirely called for – and one that won’t even come close to ruining your childhood.

A Beautiful Day in the Neighbourhood is a wonderfully heart-felt celebration of the pure kindness of Fred Rogers, brought to life by a perfectly-cast Tom Hanks and director Marielle Heller who embeds his uncynical and thoughtful nature into a story that is emotionally resonant, and desperately needed in today’s more hateful times.

Want to decide what the movie’s like for yourself?
Check out A Beautiful Day in the Neighbourhood showtimes in London
via