A Beautiful Day In The Neighborhood (Review #2)

A Beautiful Day In The Neighborhood (Review #2) 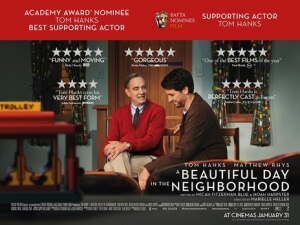 There never has been, and it’s likely there never will be, anyone who can embody kindness and compassion in the way that Fred Rogers did. Although he may not have been as huge a name in the UK as he was in the US, the late children’s TV host of Mister Rogers’ Neighborhood is seen by many as a symbol of hope and a reminder of the goodness in people, and as the world gets a little darker each and every day, such a thing is needed now more than ever.

The only people to really come close to replicating Rogers’ infectious optimism are Tom Hanks and Marielle Heller, the respective star and director of A Beautiful Day In The Neighborhood; in my previous review for the film back in October (following its debut at the BFI London Film Festival), I wrote about how both Hanks and Heller do an outstanding job of celebrating the man’s timeless appeal, especially in today’s more cynical times, but a repeat viewing exposes a more thoughtful side to the movie that even I hadn’t considered first time round, and that’s how it offers a beacon of hope to not just the cynics of the world but also anyone of any outlook on life who has gone through just about any grievance in the book. It truly is a universal film, one that anyone in the world can watch and leave with a warm feeling in their hearts, because its messages about rejecting the seething anger and hatred life thrusts upon you and instead remembering to see the goodness in people’s hearts can be adopted by just about anybody, and it’s all done in such a way that doesn’t talk down to or exclude any members of its audience. In short, it’s a film that any person in this wild and crazy world can see and be uplifted by.

As a refresher of the plot, it’s set in 1998 when Esquire journalist Lloyd Vogel (Matthew Rhys) is assigned to write a brief article about Fred Rogers (Hanks) for an upcoming issue dedicated to heroes. Vogel’s deeply cynical view of the world, as well as his deep anger and resentment for his estranged father Jerry (Chris Cooper), is already a stark contrast to Rogers’ endlessly caring and considerate nature, yet Rogers takes it upon himself to act as a pseudo-therapist for Vogel during their interview sessions, in an attempt to find the roots of his cynicism and discover the good person that he knows is still in there somewhere. His encounters with Rogers begin to have a major effect on Vogel, who aside from his family complications also has to deal with being a new father with his wife Andrea (Susan Kelechi Watson), and it’s not long before his depressing view on life finally begins to slip away.

On top of it being a well-written, well-directed and certainly well-acted film – Hanks has gone on to be nominated for his first Oscar in nineteen years for this film, and his legitimately wondrous turn here seals the deal – A Beautiful Day In The Neighborhood also carries a notable distinction of being something that can be shown to just about anyone, be they an adult or a child or an octogenarian or anyone else of any other creed, and the message will not be lost on any of them. Viewers can identify with the personal struggles that the Lloyd Vogel character is going through, from his deeply resentful view of the world and its people – which, no matter how happy we all strive to be, is something everyone has the capability to feel in our darkest moments – to the new responsibilities being thrusted upon him such as being a new father and making amends with those who he feels have wronged him in the past. At the centre of everything is Rogers himself, whose influence on Vogel fills a void left by the previous selfish acts of his own father, and inspires a form of metamorphosis that slowly transforms him into a person with the ability to actually forgive and care about people. Vogel is an audience surrogate for viewers who, like the character, need to be absolved of their negativity by someone like Fred Rogers as though they are attending confession at their local Catholic church, and it’s easy for anyone to place themselves into Vogel’s shoes and direct Rogers’ meaningful advice towards themselves, since the advice that Rogers gives him in the movie can work for just about anyone; such is the power of universal writing and easy immersion into the good nature of the story being presented to us.

Heller’s direction is also not afraid to go the extra mile to represent the tricky psychological development that one can have from going through such a radical change in thinking – in an incredibly surreal sequence, Vogel dreams of being the size of the puppets on Mister Rogers’ Neighborhood and is then talked to as such by the human members of the cast – which if handled less thoughtfully by a less talented director could have easily fallen flat on its face, but Heller is such a great filmmaker that those moments, as bizarre as they can be, also serve a thematic purpose to the overall story. It is a truly original film in that regard, because it takes creative chances that not a lot of other films like it would take, and it not only pays off with an incredibly emotional viewing experience but also gives audiences a much deeper and more considerate approach to the material than even they could have predicted. It’s a special movie to behold, and you would only be doing yourself so many favours by deciding to check it out when you can, especially if you – like Lloyd Vogel – desperately need someone like Fred Rogers in your life.

A Beautiful Day In The Neighborhood cements its powerful message of overcoming cynicism with care and forgiveness through powerful storytelling with universal themes and a bold dive into surreal territory, without once sacrificing the goodwill and genuine kindness that Fred Rogers himself – embodied by a wondrous Tom Hanks – put forward for all his life.

Want to decide what the movie’s like for yourself?
Check out A Beautiful Day In The Neighborhood showtimes in London
via