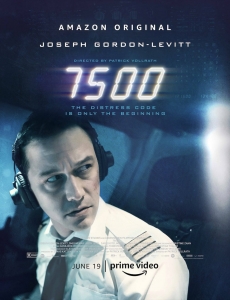 BASICALLY…: When his aircraft is hijacked by terrorists, the pilot (Gordon-Levitt) tries to prevent them from entering the cockpit…

After four years away from screens (unless you count a couple of voiceover cameos in both Star Wars: The Last Jedi and Knives Out), Joseph Gordon-Levitt is back, and this time he’s opted for a much smaller scale than he’s ever gone with before.

7500, directed by Oscar-nominated director Patrick Vollrath in his feature debut, takes place almost entirely within the cockpit of a passenger airplane, which already promises a nightmare and a half for any claustrophobes out there; as though the movie wasn’t already intense enough, there’s also that pesky confined space to spend the next hour and a half in, which you’re either going to be fully onboard for or not. If you’re willing to put those fears aside, then you’ll get a pretty suspenseful thriller that’ll leave your heart pumping throughout most of it.

Gordon-Levitt is Tobias, an American pilot who is onboard a flight from Berlin to Paris; it’s a very mundane procedure, as Tobias and the German captain Michael (Carlo Kitzlinger) perform the standard safety checks, impatiently wait for a couple of late passengers to board, and eventually get the plane into the air. However, not long after they’ve taken off, all hell breaks loose; a group of terrorists try to fight their way into the cockpit, fatally injuring Michael with weaponised pieces of glass, and holding the rest of the passengers hostage (which, again, we don’t see since we never leave the front of the plane). With an injured arm, a dead captain and an unconscious terrorist inside the cockpit with him, it’s left to Tobias to try and land the plane safely while also not letting any of the passengers be killed by the would-be hijackers.

Because we hardly ever see anything going on outside this one location, it makes things feel a lot scarier; the constant beating from the other side of the door as the terrorists try to force their way into the cockpit serves as the only musical score for this otherwise music-less film, a sinister reminder of the ongoing danger happening just inches away even in some of the quieter scenes involving Tobias’ efforts to communicate with ground control. Vollrath makes effective use of the singular location with numerous camera angles to give off the illusion that the space is much bigger than it is, yet at the same time it re-enforces how little space our hero actually has in order to both land safely and keep the terrorists from harming anybody else. They maintain a level of suspense that leaves you just as shaken and stressed as Tobias undoubtedly is, especially when the terrorists threaten certain people he himself is very close with, and you see on the camera their terrified faces up close that’s hard to not feel some kind of tragic sympathy for.

It’s held together by a strong performance by Joseph Gordon-Levitt, who has a natural charisma that helps him easily carry this movie right up to the very final shot, and whose extraordinary ability to keep calm even in the most intense of situations makes him somebody you’d feel okay with talking you down during such a crisis. The actor is on-screen for roughly 95% of the entire movie, which can be an exceptional challenge for any actor headlining a movie of such a small scale, but Gordon-Levitt makes it work with a performance that feels confident but also incredibly human at the same time; this isn’t someone who has a dramatic past or has a contrived mystery surrounding him, he’s just an ordinary guy who happens to be put in this incredibly perilous position where he reacts just like any person would, but with a professional sense of calm that makes all the difference for someone in this character’s line of work.

By the time we land into the third act of the movie, you can start to feel the jet engines cooling down significantly. We are introduced to Vedat (Omid Memar), a young member of the terrorist group who eventually finds himself in a close position with Tobias, and it’s where the film leans a little harder into contrived territory, especially when he goes through a couple of cliched personality shifts as he begins to doubt the very nature of their mission. It goes on for a while longer than it needed to as well; around the time when a film like would usually end, it carries on for at least another fifteen minutes, and you’re just left waiting there for the inevitable to happen so that the movie can finally wrap up. It’s still a well-made and well-acted section of the movie, but after all the constant nail-biting tension that’s been built up for the past hour or so it feels like a slow deflation that would have benefitted from ending right at the peak of its tension instead of this much more sombre conclusion.

The movie as a whole is an intense and reasonably thrilling way to kill an hour and a half, with a strong lead performance by its headlining actor, but not everything about it works, particularly a conclusion that doesn’t quite accomplish the all-out suspense it had been building up before then. Again, though, anyone who suffers from claustrophobia will most likely be very reluctant to spend an entire movie in this one cramped space, so just thank your lucky stars that you’re at least sharing that space with Joseph Gordon-Levitt of all people.

7500 is a thrilling and largely suspenseful airborne thriller, complimented by some strong if claustrophobic filmmaking and led by a strong performance by Joseph Gordon-Levitt as a very human pilot caught in a hijacking scenario, although it does eventually lose steam by the tension-deflating third act.

Want to decide what the movie’s like for yourself?
Check out 7500
via