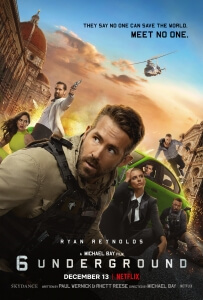 BASICALLY…: Six people fake their deaths so they can form a vigilante squad and take on some of the world’s most dangerous criminals…

Did you honestly think that moving to Netflix would humble Michael Bay and his explosive style? Well, I hate to be the bearer of bad news, but you just lost that weird bet.

6 Underground is Bay at his most Bay-iest: explosions, car chases, explosions, testosterone overload, explosions, upskirt shots of scantily clad women, explosions, editing that can be described as ADHD at best, and did we mention explosions? The only difference here, is that it’s skipped cinemas entirely and gone straight to your living rooms, intended as the most insane evening in you’ll ever experience.

Thank goodness, because at least with Netflix you can pause it every once in a while to re-collect your thoughts; if this assault on the senses was released in cinemas, I guarantee that people will be having migraines after two non-stop hours of absolute insanity in a darkened auditorium, on top of experiencing what has to be some of the craziest, dumbest and completely off-the-rails action you’ll see in any media all year.

The six of the title are a team of covert operatives who have faked their deaths so they can take on some of the world’s most evil figures. Their leader, One (Ryan Reynolds), is a billionaire who funds their globe-trotting operations; following him, there’s French CIA agent Two (Mélanie Laurent), Mexican hitman Three (Manuel Garcia-Rulfo), parkour enthusiast Four (Ben Hardy), medical doctor Five (Adria Arjona) and former army sniper Seven (Corey Hawkins), a new recruit following the death of their driver Six (Dave Franco) during the opening sequence. Their new mission is to overthrow the ruthless Middle-Eastern dictator of fictional country Turgistan, and replace him with his democracy-favouring brother (Payman Maadi).

Honestly, I’m rather pleased with myself that I was able to decipher this much from the plot, because – as is par for the course with a Michael Bay film – it’s so all over the place that it’s legitimately hard to keep up with everything that happens. To say nothing in this big Michael Bay action flick makes sense is like pointing out how it gets cold in the winter time; you expect everything in one of his movies to be the epitome of the phrase “over-the-top”, and for better or worse this does give you exactly what you’re expecting. The thing is, Bay is merely working from a script by Rhett Reese and Paul Wernick, the writers behind the Zombieland movies and – more significantly, because Ryan Reynolds – the Deadpool flicks, who have proven in the past to be able to write bombastic action films like this which are funny, exciting, and even a little heartfelt at times. This script, however, is like if they snorted mountains of cocaine and chugged gallons of Bud Light during every writing session, and this is the crazy coked-up result which isn’t so much fun to watch – it actually gets pretty discombobulating at times – but more like you’re listening to a 12-year-old boy tell you what he thinks a Mission: Impossible movie is. It’s a rare misstep for the writers who have crafted a script so nonsensical and wildly unfocused that it makes Bay’s direction seem slightly more streamlined by comparison.

Now, I realise that a plot and characters are always going to be an afterthought in one of his films, but there has to be something that you can latch on to in order to keep yourself invested, and this movie really doesn’t have much of that other than, again, some incredibly bombastic action sequences. The plot makes zero sense, the characters are either thinly-defined or written in such an obnoxious manner that they fail to ever become likeable – even Ryan Reynolds, one of the most charismatic actors working in Hollywood right now, is resorted to spouting lines that wouldn’t even work in a Deadpool movie – and the action, when you can actually focus on it during the brief moments of tranquillity in the camerawork and editing, is shockingly gruesome in parts. Seriously, there is more gore in this film than many of the horror films I’ve seen this year and much of it is pretty unpleasant as it’s constantly being used for shock value (and to also flaunt its more adult rating than Bay’s last few films).

Is it good? Absolutely not, and that’s not just because I’m not a huge fan of Bay’s work; this is a legitimately exhausting, incoherent and absolutely bananas action movie that you’ll need the patience of a saint to put up with. In a very weird way, however, one can also see the mindless enjoyment that someone could get out of this film. Like most of Bay’s work, you have to be able to switch your brain off to enjoy it, and while there’s too much dumb in his films (this one included) for you to be able to do this, there is a sense that this can easily be enjoyed as a throwaway movie night in your home, if you got some friends together just to get drunk with as you watch it. Then again, this movie feels like it was both directed and written by drunk people, so it only makes sense that you have to consume alcohol just to get through a screening of it.

6 Underground contains all the bombastic action, nonsensical story and pure overall insanity you’d expect from a Michael Bay film, but non-fans of his will not be most satisfied, especially with a script by Rhett Reese and Paul Wernick that’s far too out there even for them, with incoherent plotting, unlikeable characters, and some shockingly gruesome violence that’s pretty unpleasant to stomach at times.