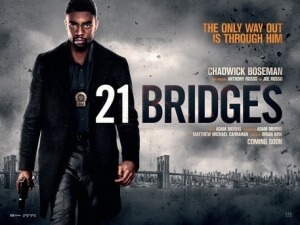 BASICALLY…: Police detective Andre Davis (Boseman) leads a city-wide manhunt for a pair of cop killers, only to discover not all is as it seems…

It’s astonishing to think that, before directing some of Marvel’s most acclaimed films and also knocking Avatar off the top spot on the all-time worldwide box office list with Avengers: Endgame, directors Anthony and Joe Russo were best known for making comedies like You, Me and Dupree, Welcome to Collinwood, and several episodes of Arrested Development and Community. Now that their profile has grown considerably, it’s only natural to leave their lighter roots behind and branch out into darker and gritter territories, and a film like 21 Bridges is about as far from forgettable Owen Wilson comedies as you can get.

The Russos only serve as producers on the film, however; directing duties here go to Brian Kirk, who has worked on practically everything from Game of Thrones to Dexter to Luther, and who brings the rough and thrilling nature of those shows to the story of hardened NYPD detective Andre Davis (Chadwick Boseman), who is called in one night to investigate a very serious crime. Said crime involves small-time crooks Michael (Stephen James) and Ray (Taylor Kitsch) who, during a drugs heist, kill eight cops who apparently just happened to be at the scene, and are now trying to escape the island of Manhattan before the authorities can close in on them. Unfortunately for them, Davis is one step ahead; in a bold effort to catch the criminals, he orders a lockdown of all routes in and out of Manhattan, leaving them virtually trapped as Davis and the rest of the force close in on them. However, as it soon transpires, not all is as it seems.

Sounds ridiculous? Of course it is, but that’s part of what makes this movie oddly enjoyable; it is a no-holes-barred throwback to the kind of down-and-dirty cop action-thrillers you’d see the likes of Denzel Washington or Mel Gibson headline in the 90s, ones that have ludicrously high concepts that contain extreme instances of violence and where everyone is swearing up a storm. More often than not, those kinds of films know exactly what they’re meant to be – frequently silly but never dull – and 21 Bridges is no different, with a firm-fisted tone that isn’t afraid to get a little nasty every now and then, as well as a damn fine ensemble of character actors who have the talent and charisma to sell even the most out-there plot twists and dialogue. You have a very charismatic Chadwick Boseman as your lead, who of course is no stranger to working with the Russos (he made his debut as Black Panther in the Russos-directed Captain America: Civil War) and brings a tough sense of street smarts to a character who otherwise might seem a little thin on paper. Then there’s several other notable actors popping up in significant roles, from Sienna Miller as Boseman’s partner on the case, to J.K. Simmons as a police captain, to a criminally underused Keith David as a senior officer, all of whom are given intense direction by Brian Kirk to match the grimy, often harsh, tone which they are operating under.

As someone who has worked primarily in television, Kirk seems to have picked up some key beats in putting together some of his big-screen action scenes, which not only feel theatrical but highly engaging. The film is shot rather well, with moody night-time cinematography taking in the dimly-lit alleys of Manhattan and the blinding neon lights that form the many police sirens to hint at the beautiful ugliness the overall tone seems to be suggesting. As for the action, Kirk also manages to make everything look as accessible as possible, with even the inevitable shaky-cam feeling smooth and easy to make out what is happening exactly (a trick inherited from the Russos, perhaps?). It keeps things suspenseful, even a little tense, and it’s a testament to the efforts of the director and his crew that it is consistently so, ensuring the audience stays thoroughly entertained throughout a vast majority of it.

Does that mean this is a new classic example of its type? Absolutely not; it’s a fun ride, but not one you’ll probably remember in a few weeks’ time. I’ve already dropped words like “silly” and “ludicrous” into this review already, and it’s no less true even after the last couple of paragraphs where I’ve been praising it – this is a very silly film, the kind where certain twists and motivations don’t really make a whole lot of sense, it’s easy to predict what is really going on beneath the surface and who is involved, and there are even times when all sense of logic gets shot in the face for the sake of a big action sequence. If the film went through another rewrite to remove certain elements and clichés, then it actually could have also worked on a script level; instead, though, we’ll just have to settle for the film working as pure action entertainment, the kind that’s best enjoyed when you switch your brain off, or if you just want to see bloody gunfights and Chadwick Boseman being his movie star self.

Even though this is far from the Russos’ finest work, they’ve had such a good run as of late that they can afford a slight blip on their radar, even when that blip is thoroughly entertaining despite its obvious misgivings. It’s a bridge that’s not exactly sturdy, but strong enough to see you get over safely to the other side.

21 Bridges is a gritty cop action-thriller that’s heavy on action and thrills, thanks to the efforts of director Brian Kirk and his strong ensemble of actors, although its rather silly script – filled with nonsensical plot twists and clichés – prevents it from being more than just a solidly entertaining movie that you can switch your brain off to.

Want to decide what the movie’s like for yourself?
Check out 21 Bridges showtimes in London
via