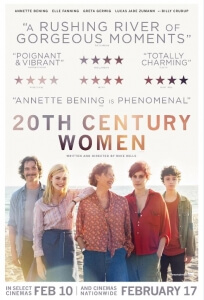 Some kids often make cards or buy tacky gifts for their parents, but in writer-director Mike Mills’ case he’s made entire movies for both of them. His previous film Beginners explored his relationship with his father, with Christopher Plummer in an Oscar-winning role that deliberately mirrored Mills’ real-life dad, who like in the film came out as gay at an older age. Now, in a much more grounded and bohemian fashion, comes Mills’ tribute to his mother which explores not only his experiences growing up with her in the late 70s, but also the position of femininity as a whole in that time period – and of course, it is all handled with strict delicacy and intimate characterisation that ultimately makes 20th Century Women a worthwhile movie.

As mentioned, the film takes place in the late 1970s, in Santa Barbara, California where 14-year-old Jamie (Lucas Jade Zumann) is being raised by his 55-year-old single mother Dorothea (Annette Bening). Concerned that her son is growing up without a stern fatherly figure in his life – what with her going through several short-term relationships, and the only male figure being a friendly but awkward handyman named William (Billy Crudup) whom Jamie doesn’t have that much of a connection with – Dorothea calls upon the help of two other women to help her son mature. The first woman is Julie (Elle Fanning), a promiscuous childhood friend of Jamie’s who teaches him how to act cooler around girls, even though Jamie is secretly in love with her, and the second is Dorothea’s tenant Abbie (Greta Gerwig), a photographer with short red hair (which she got done after seeing David Bowie in The Man Who Fell To Earth) who is recuperating from a bout of cervical cancer, and who teaches Jamie all about punk music, feminism, and how best to pleasure a woman. The film also takes time to explore the inner workings of these characters, such as Dorothea’s own insecurities despite her laid-back nature, Julie’s incompatibility for mixing meaningless sex with genuine love, and Abbie’s oddball desire for a connection with other people, including asking a lover to act out a fantasy seduction scene that feels and sounds like a lead-in to any porno movie ever.

These three female leads, and the actresses that have been brought on board to bring them to life, are by far the best thing about the movie, which was already an enjoyable experience to begin with. Gerwig and Fanning are very much on their way to becoming true powerhouse actresses in their own right if this film is anything to go by, but neither of them can catch up quite yet to Bening’s true mastering of the craft, and here she gives a thoroughly human and grounded performance that ranks among her strongest in years. Dorothea is a character who Mills clearly is absolutely infatuated with – not least because she’s based on his own mother – as he writes her as an old soul whose wit and old-age wisdom is slowly being drowned out by the politics of the time, leaving her with only the love and concern she has for her son left to really cling onto in this increasingly alien world. It’s a role that Bening more than excels at, bringing underlying pathos as well as sharp humour to the character that makes her a fascinating person to get to know, as well as enough warmth and charisma to act as the film’s beating heart. All three actresses are great here, but credit should also be given to young Lucas Jade Zumann, whose rather striking resemblance to a young Anton Yelchin ensures that the late actor’s legacy is bound to live on through this new natural talent, but is strong enough as an individual performer to give him a lasting career as he ventures further towards adulthood.

Outside of the great central performances on display, the film is very much what you’d expect from a Mike Mills film by this point, which isn’t necessarily a bad thing but much like his previous films Beginners and Thumbsucker, Mills has a particularly quirky style that is certainly not going to attract everyone. It is very much in Mills’ dojo for his films to be a unique signature, what with 20th Century Women mixing fictional drama with sharp quick-cuts to random scenes, archival footage and images not unlike a documentary feature, overlapping and sometimes non-linear narration (a character reveals about halfway through what ends up happening to them in the end), and it is a style that could potentially divide audiences who are looking for a sweet family drama, but might either be entranced or put off by how it is executed. Personally, I like Mills’ style of filmmaking, as it doesn’t ever seem to distract from the bigger pillars of storytelling that’s going on, but at the same time it won’t be too difficult to understand why some people might find it to be a confusing, slightly pretentious attempt to be an even more hipster version of Wes Anderson. However, while I respect the opinions of anyone who harbour those feelings towards Mills’ style, my personal opinion is that it’s a likable style that helps get the point across in a more unique and heartfelt way.

It is certainly worth going to see 20th Century Women if you want to see a grounded, heartfelt movie about empowered females in the late 1970s, which this movie conveys with great appreciation for its characters, especially Bening’s, and as Mills now runs out of films to make about his two parents, let’s hope he has at least one other sibling to make one for, because he’s seriously on a roll right now.

20th Century Women is a grounded and heartfelt exploration of femininity in the late 1970s that’s bolstered by wonderful performances, especially from the film’s emotional centre Annette Bening, and a unique directorial style which, though not for everyone, nonetheless helps to convey the message with a swift appreciation for its characters and story.