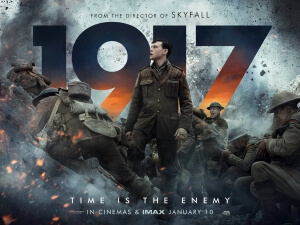 BASICALLY…: During the First World War, two young soldiers (MacKay and Chapman) are tasked with delivering a message that could prevent hundreds of British soldiers from walking into a deadly trap…

Having an entire film appear to be done in one continuous take is not a new practise, going all the way back to Alfred Hitchcock’s Rope and as recently as Birdman and Victoria, but for his latest film Sam Mendes perhaps accomplishes the most ambitious attempt yet to portray a real-time scenario on such a massive scale.

It is also, for a director whose debut film American Beauty ranks as one of my personal favourite movies of all time, his unquestionable masterpiece.

1917 takes place during that titular year, as we follow two young soldiers fighting in the First World War, Lance Corporals Schofield (George MacKay) and Blake (Dean-Charles Chapman), who have been given orders to carry out a very specific mission. There is due to be an assault on the supposedly fleeing German army, but sources have confirmed that the entire thing is a ruse, designed to lure thousands of soldiers onto the battlefield and into their deadly trap; the young soldiers’ mission is to deliver a message calling off the attack, and therefore saving everyone’s lives, among them Blake’s brother (Richard Madden), meaning that the two of them have to venture across enemy territory and encounter several of the war’s horrors up front if they are to succeed.

It shares a similar aesthetic to Alfonso Cuarón’s Gravity, in the sense that it’s a very simple story that’s made all the more poignant by the exquisite filmmaking and strong levels of emotion that are beautifully portrayed by the actors and Mendes’ thoughtful direction. This is also, like Birdman, a major technical achievement in how it pulls off the one-take gimmick without once showing the cracks; if there are cuts, which they almost surely have to be, the effect is so seamless that you can barely notice where the editor has pasted together the footage to give the outstanding illusion of one glorious shot. The effect really does put you at the side of these two soldiers, who have to travel through everything from the mud-filled trenches to the post-apocalyptic wastelands that form No Man’s Land, to places which would be considered a spoiler if I went into too much detail but are just as menacing and gruelling as the ones I just mentioned. It is so brilliant captured by cinematographer Roger Deakins, who should be on track to receive only his second (!) Oscar for his work here just for the ambition alone, and by Mendes who takes his experiences on the last two James Bond films – in fact, the opening sequence of SPECTRE, also done in mostly one shot, can be seen as a prototype for his work on this movie – and uses them to engage the audience in ways that not even 007 himself could manage.

While the sheer ambition of the filmmaking is undoubtedly going to be one of the film’s biggest selling points, 1917 doesn’t resign itself to just being a strong technical achievement. It is also ripe with emotion, fuelled by two captivating lead performances by George MacKay and Dean-Charles Chapman who are engaging through the sheer physicality of their roles as well as their individual abilities to make us care for characters who, if handled by a lesser filmmaker, would be nothing more than thinly-defined blank slates. The camera work also recognises the weight of their performances, with the focus of an entire scene just being on one of the character’s faces as the sheer weight of their mission and current circumstances comes crashing down as the other soldiers around him just chat amongst themselves, oblivious to the true horrors that lie out in the unknown. The emotion is amplified by Thomas Newman’s score, which ranks among the finest pieces of music that the composer has created in recent years, but the feels come thickest when we’re just spending time up close with these characters and the numerous people they encounter along the way, all played by high-profile actors such as Colin Firth, Mark Strong, Andrew Scott and Benedict Cumberbatch in what are essentially cameo roles but are no less important to the overall direction that Mendes wishes to take us with this story.

It is a film that consistently holds your attention, because not only is the way in which it is shot so intense that you can barely afford to blink let alone miss a second of the action, but because you know enough about these characters to care you are undoubtedly rooting for them to complete their mission even in the face of danger. This is a movie that makes everything from darkness to rats seem utterly terrifying (or, at least, more than usual), and you are right there as the protagonists face each and every one of these dangers who, like the audience, are desperately trying to figure out how they’re going to make their way through this mess. Most of all, though, this is made by a filmmaker whose passion for both the art of filmmaking and storytelling guides us through the dark gravity of the situation and gives us hope that, no matter how bleak the imagery or how devastating the realities of war can be, there is always a bright spot waiting for us at the other end. It is Mendes’ masterpiece, both as a filmmaker and as a storyteller, and he has set a new standard for former Bond directors to deliver one hell of a solo project (your move, Cary Joji Fukunaga).

1917 is filmmaker Sam Mendes’ masterpiece, a technical triumph that sees him collaborate with cinematographer Roger Deakins to seamlessly create the illusion of one continuous take on a far more ambitious scale than it’s even been done on before, but is also rich with emotion due to some captivating performances, a beautiful score by Thomas Newman, and a true love for the craft of filmmaking that is very much on display throughout the entirety of this brilliant film.

Want to decide what the movie’s like for yourself?
Check out 1917 showtimes in London
via