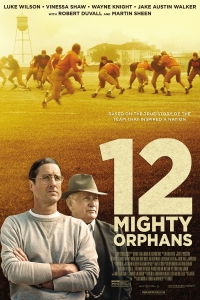 BASICALLY…: A scrawny team of football players are trained to become an inspirational team…

Sometimes when you have a movie that’s set in Hollywood or just about movie-making in general, there’s usually a scene where we’re shown a cheesy inspirational flick being filmed – often a sports movie where the actor is playing a coach delivering an uplifting speech to his team – and it’s playing with all the typical clichés and corny dialogue you’d normally associate with this kind of film. That’s exactly what 12 Mighty Orphans is, except it’s not at all part of a satirical Hollywood farce; it simply is one of those films they’d often make fun of.

The film tells the story of the Mighty Mites, an American football team made up of young players residing at the Masonic School for Orphans in Fort Worth, Texas during the Depression era. It is around that time when the school’s new coach, Rusty Russell (Luke Wilson), arrives with his family to teach at the institution, where the orphans are routinely mistreated and forced into on-site labour by its cruel dean Frank Wynn (Wayne Knight). Rusty, along with the school’s physician Doc Hall (Martin Sheen), whips the scrawny young players into shape, despite the fact that none of them have even played the sport before in their lives, and soon they begin dominating the Texas high school football league, thanks to Rusty’s revolutionary new tactics and the players’ indomitable spirit which quickly captures the heart of the nation.

It is such a biographical sports movie by every definition, from the inspirational speeches to its underdog narrative, right down to its squeaky-clean attitude, that I’m honestly surprised that this wasn’t distributed by Disney (instead, Sony Pictures Classics handles 12 Mighty Orphans’ release). Like actual Disney sports movies such as Remember the Titans and Invincible, it adopts a very old-fashioned approach that is entirely accessible to all audiences, all while retaining its feel-good factor and a wildly simplistic structure to tell this glossier version of real events. However, that doesn’t make the formula any less easy to spot, with the movie making very little effort to hide the fact that this script is eye-rollingly familiar, with cookie-cutter dialogue that you can play a drinking game along to (though that isn’t recommended, seeing how you’d be black-out drunk by the midway point), thinly-defined characterisations for most of the titular 12 orphans – a defining personality trait for one of them is that they have a stutter, and he’s lucky to even have such a trait since few of them even have dialogue – and exaggerated drama which almost makes this movie feel like a parody instead of a genuine movie.

It wants desperately to be a sincere, good-natured telling of this intriguing story, but it’s hard to see past its blatant reliance on such tired tropes, and especially its extremely odd execution. The direction by Ty Roberts is shaky, with a lot of scenes intercut with outrageous editing that gives even the quieter scenes the pacing of a Liam Neeson action film, and lacking in subtlety as the rapid-fire cutting will show scenes of the First World War alongside shots of a football game in motion (these are done to signify Rusty Russell’s flashbacks to his time serving in the war, but it’s so haphazardly stitched together that I’m just assuming someone spilled coffee onto the editing bay). It’s a film that also contains some bizarrely over-the-top performances – a scene involving one of the orphans’ abandoning parents is awkward in how little these actors are reigned in – and the most cartoonishly evil villains since the last cheesy sports movie. You have Wayne Knight in full Newman mode here, as this sadistic wormy bastard who gets overinflated thrills from beating the boys with a wooden paddle, and then there’s rival coach Luther Scarborough, played by the film’s co-writer Lane Garrison. This guy is straight out of a Bugs Bunny cartoon, with such a sadistic and evil grimace (not to mention a haircut that makes him look like Kim Jong-Un) as he lies, cheats, and even instructs his players to use career-ending force against the orphans just to win this high school championship which doesn’t matter. I’m not going to lie, this was probably my favourite character in the movie, for how lazily and one-dimensionally he’s written, to a point of being completely comical. Again, are we certain that this isn’t a parody?

Some highly entertaining performances aside, 12 Mighty Orphans is a completely standard and forgettable sports movie, one for genre completionists only. It contains all the cheesiness and clichéd tropes you expect to find in one of these films, but plays them completely straight and with next to nothing new added to the formula, leaving it destined to fade into sports bio obscurity.

Plus, it wastes the first time in fifty years that Martin Sheen and Robert Duvall (in a pointless one-scene cameo) have shared the screen together. Now that’s got to be worth docking a few extra points.

12 Mighty Orphans plays the typical biographical sports movie clichés with a straight face, which aside from a few entertainingly over-the-top performances makes it hard to stand out.

12 Mighty Orphans is now showing in cinemas nationwide – click here to find a screening near you!