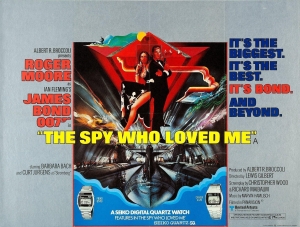 This week, we’re taking a look at what is perhaps the most acclaimed entry of the Roger Moore era, and for a very good reason. The Spy Who Loved Me is a pure thrill ride, one that unlike many of the previous Bonds has it all without any of it feeling forced: the action is on point, the comedy is on point, the characters, the dialogue, the filmmaking and just about everything else in this movie works perfectly. It’s by far the best of the Moore films, and is certainly now up there among my favourites of the series.

In this one, two submarines carrying nuclear missiles are captured, putting not just Bond (Moore) on the case but also his Russian equivalent, Anya Amasova aka Agent Triple X (Barbara Bach). She has been hired by Russian Intelligence just as he is by MI6 to track down the submarines, and both must work together in order to take down the mastermind, reclusive billionaire Karl Stromberg (Curd Jürgens), from using the missiles to blow up major cities in order to create a new underwater civilisation. Adding tension to Bond and Amasova’s already-hostile relationship is the fact that Bond, during the film’s now-classic opening sequence on the ski slopes of Austria (the one with the Union Jack parachute), had killed her lover at point blank, and she is keen to find the very person who’s responsible.

The film has many strengths that it’s hard to know which ones to highlight within the short amount of space allocated for this review; much has been said already by others about a lot of things in this movie, from the awesome set designs – the villain’s underwater lair is an impressive piece of work, and even scored the film an Oscar nomination for Best Production Design – to Carly Simon’s theme song “Nobody Does It Better” which has become one of the few Bond songs to transcend its origins to become a universally beloved song in its own right. While those things certainly hold up, there are so many other things which also make for impressive viewing even to this day; one such thing is the dynamic between Bond and Amasova, which is particularly enjoyable as both of them try to outwit the other in order to fulfil their separate missions in ways that sometimes resemble that of a classic screwball comedy. Moore and Bach have great chemistry with each other, which bounces off of their competing egos with an equal amount of charm and charisma, with Moore – now having fully settled into the role of James Bond – in particular commanding the screen like he never has before in the lead role (and, from what I hear about the rest of his films, probably never will again).

This movie is also the introduction of perhaps the greatest Bond henchman to ever appear in one of these films; the aptly-named Jaws, played by the late Richard Kiel, whose metal teeth and extremely hench figure make him look like this unholy mix of both Dracula (he even bites into people’s necks) and Frankenstein’s monster, and is probably just as indestructible (throughout this movie, he falls off cliffs, gets kicked out of trains, falls into shark tanks, and he still survives to the end of the movie). Kiel is intimidating as hell in the part, with absolutely zero dialogue yet you feel every single one of his maniacal thoughts as he lunges his way through fight scene after fight scene between the two leads; there are times when he even gets scary, jumping out as though he’s now a jump-scare from a typical Blumhouse movie, with his thousand-yard stare and stern grimace leaving you utterly terrified for the first time in this series. It’s little wonder why this character has gone on to become one of the most iconic Bond villains, because very few before and after him have really left as little of an impression from both a physical and mental standpoint, even without utter a single word.

The action is also some of the more impressive of the Moore era, including a surprisingly stressful climax where the editing, sound design and choreography all make for a heart-pumpingly intense watch, and is exciting enough to make you forget some of the lesser moments such as some brief but noticeably bad green screen, and a couple of silly tongue-in-cheek moments where, in the middle of a trek through the deserts of Cairo, the theme for Lawrence of Arabia begins to play on the soundtrack. However, like the best Bond movies, the fun outweighs the logic, and this movie is plenty of fun from the cool gadgets – the submarine car makes an appearance here – to the humorous quips that Moore spurts out every now and then, all adding to a film that gives the audience everything that it wants to see in a Bond film without pandering or being a bit too clever for its own good. This film is up there with a handful of others in the Bond lore, with the film ending on such a high that they’d have to go all the way to the moon to top it… but they wouldn’t do anything that ridiculous, right? Right?!

The Spy Who Loved Me is a great entry that sees both Roger Moore and the overall filmmaking on top of their game, with endlessly fun action, great characters and memorable villains making it one of the series’ all-time bests.

JAMES BOND WILL RETURN NEXT WEEK IN: MOONRAKER