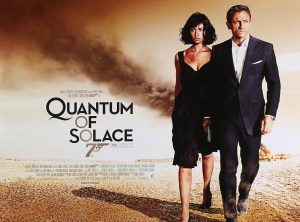 BASICALLY…: James Bond (Craig) seeks answers about the mysterious organisation that is plotting to eliminate a country’s most valuable resource…

This week, it’s the entry that numerous people considered a disappointment after the success of Casino Royale, and there’s certainly a lot of things about Quantum of Solace – aka Casino Royale: Part 2, seeing how it’s the first in the series to be a direct sequel – that do not work, especially when you realise what it is they were trying to do with this one.

This one is set mere moments after the end of the previous film, with Daniel Craig’s Bond having captured the shady Mr. White (Jesper Christensen) after he played a part in his lover Vesper Lynd’s betrayal and later death. Bond and his superior M (Judi Dench) learn from White that a sinister organisation called Quantum – which is totally SPECTRE but, for then-legal reasons, isn’t – has been operating without MI6’s knowledge, and Bond sets out to learn more about them while pursuing one of their agents, businessman Dominic Greene (Mathieu Amalric) who is attempting to initiate a Bolivian coup so that he can gain access to the country’s environmental resources. Along the way, Bond crosses paths with Camille (Olga Kurylenko), who has her own plan of revenge against the former dictator that Greene is friendly with, and the two of them soon join forces to put an end to Greene’s ambitious plans.

At 106 minutes, it’s the shortest Bond movie to date, and there’s an extremely good reason why; the pace of this movie is so much faster than any other entry that it makes everything from the action to the dialogue to especially the editing feel like it’s just turned the speed up on the treadmill, with almost no time devoted to just taking a breather and catching up with the intricate plot that’s being given to us at a mile a minute. Twenty minutes into the film, we’ve had no less than three major action sequences, all shot with the same kinetic quick-cut editing where shots last no longer than three seconds apiece, and it barely dies down from there, leaving you both exhausted and even more confused since you’ve not been given much time to process all of it. It appears that the filmmakers tried a little too hard to replicate the tone and pace of another spy series which had been growing in popularity over the years; the Bourne series, itself marketed as a more grounded and less fantastical version of Bond, was renowned for its realistic camerawork and editing, but the problem is that the style does not match the more streamlined appeal that Bond has, and so it feels much more like a cheap imitation of something else than an identifiable Bond movie. Both Bond and Bourne are separate entities, both in style and in substance, and by trying to mesh the two together you get a mess of ideas that probably weren’t all that well thought out, like a sudden environmental theme involving the (rather bland) main villain’s scheme, and giant action sequences which come almost out of nowhere and with very little set-up or explanation.

Like most movies shooting at the time, Quantum of Solace came under fire during the WGA writers’ strike, with the bare minimum of a script completed before main production began, so whatever this film lacks in both plot and characterisation isn’t entirely down to the writers, but more the situation they were in. That being said, this is a very flimsy plot that anyone can easily poke holes through, which the shortened running time to its credit helps breeze by, while you don’t get to know much about the characters or their reasons for going all Licence to Kill on their enemies; Bond is a bit more of a closed door this time round, which Craig’s intense-as-hell performance feels a little wasted on, and Olga Kurylenko leaves a good enough impression but her character lacks the complexity and grace of Eva Green’s Vesper from the movie prior. By the time the main climax comes around – which, again, doesn’t take that long to get to – you don’t feel the heart racing as much as it should be, because you’ve been given very little time to process what’s going on and even less time with the characters and their overall motivations.

While it’s nowhere near Die Another Day bad, this is probably the weakest yet of Craig’s run as Bond; it’s far too occupied with trying to be something that it’s not – which feels pointless, because it had already established its identity with Casino Royale – that it forgets to give the audience a reason to be invested or even care about the plot and its characters, which even some of the lesser Bond movies have done to a degree. Luckily, the next one would very much embrace the identity of the series, with a landmark film that everyone could agree was among some of Bond’s finest moments; but we’ll see next week if it lives up to that some years on. Either way, it’s better than Quantum of Solace.

Quantum of Solace is the weakest entry in Daniel Craig’s run as James Bond thus far, with overly-kinetic and fast-paced storytelling which blatantly feels like it’s copying the Bourne style rather than relishing in its own identity, and leaves basic elements like story and character largely in the dust.

JAMES BOND WILL RETURN NEXT WEEK IN: SKYFALL