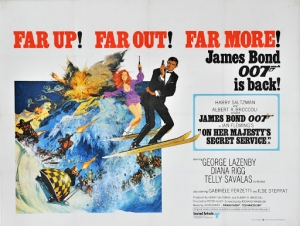 This week, George Lazenby slips into 007’s shoes for the first (and only) time in On Her Majesty’s Secret Service, a film which wasn’t thought by many at the time to be among the best of the movies – presumably because there was a great big Sean Connery-shaped hole left to fill – but has since been re-evaluated as not just one of the best Bond movies (if not the best), but perhaps one of the best spy movies of all time, with even filmmakers like Christopher Nolan and Steven Soderbergh singing its praises.

But does the film deserve the reputation that it’s been building up over the last fifty years? Well, in a way, it does; there are some truly excellent moments in this film which are by far among the most emotional of any Bond movie, not to mention the fact that it features perhaps the most complex Bond girl that there ever was, although I’m a little hard-pressed to say that it’s the best out of all the Bonds.

Unlike most of the other films, this one is primarily a love story; James Bond (Lazenby) crosses paths with the mysterious Countess Teresa di Vicenzo, or “Tracy” (Diana Rigg), who is the only daughter of Marc-Ange Draco (Gabriele Ferzetti), the head of a European crime syndicate. He offers Bond a hefty sum to woo and eventually marry Tracy as a means to cure her of her melancholy, and in the process he ends up falling in love with her; however, his romance is intercepted by the latest scheme to come from SPECTRE head Blofeld (this time played by Telly Savalas), who is brainwashing a group of women at a wellness resort in Switzerland to distribute biological weapons across the world.

The thing about this movie is, it’s legitimately great when it’s focusing on the romantic aspect of the plot, but when it’s time for it to actually become a Bond film, it’s by no means bad but it’s merely okay. Every time the film focuses on the growing relationship between Bond and Tracy, the movie really comes to life; not only do Lazenby and Rigg have some electric chemistry together, but Peter Hunt’s smooth direction, a charming script, and John Barry’s luscious score (particularly a beautiful instrumental version of Louis Armstrong’s “We Have All The Time In The World”, this film’s official theme song) give their scenes a legitimately romantic feeling in the classic Hollywood sense. Even if you know how this particular movie ends, you’re still fully engaged in their, erm, bond with each other which gives you such an overwhelming feeling of joy and happiness. However, it also realises that it needs to be what the audience have come to see, that being an exciting and bombastic spy action-thriller, and again it’s not like those elements are done badly at all (there are some great action scenes set on the ski slopes of the Alps) but you’re not quite as invested in it as you are in the other plot of the film. It seems very routine for a Bond film at this point, whereas the romantic plot felt like a genuinely fresh new addition to the series.

Speaking of new additions, let’s talk about George Lazenby; often regarded as the “one-hit wonder” of the series, the Australian actor didn’t quite have the same post-Bond career trajectory as someone like Sean Connery or Timothy Dalton, but he makes the most of his sole appearance as 007. His is a very different take on the character than Connery, for whereas he is more of a cool and charismatic uncle, Lazenby plays him like the younger brother who’s something of a hopeless romantic, who’s a lot more vulnerable because he’s not afraid to show more of his emotions. Lazenby offers a much more humanised rendition, perhaps one of the more grounded portrayals of the character in this series, and while he doesn’t quite have the same amount of screen presence as his on-screen predecessor he inhabits the part and very much sets it apart from what came before and will come after.

Though it’s a shame that Lazenby only played Bond just the once, it does make the film as a whole feel a lot more separate than the ones before; it’s a lot more grounded following the epic silliness of You Only Live Twice, and its firm focus on Bond’s pursuits of the beautiful Tracy really do make this a unique entry into the overall Bond canon. It’s definitely easy to see why this is a favourite for so many, and while it’s too early in this retrospective to be truly handing out such labels (I can only react to them one at a time) it might just stay in my mind long enough for me to remember it by the end.

On Her Majesty’s Secret Service is a unique entry into the overall Bond canon, with a firm focus on a romantic plot that proves to be the most outstanding aspect of this film (not forgetting George Lazenby’s vulnerable take on 007), but when it needs to fill the requirements of a standard Bond film it’s not quite as engaging.

JAMES BOND WILL RETURN NEXT WEEK IN: DIAMONDS ARE FOREVER