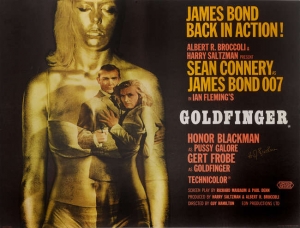 Aside from having some of the most iconic lines, characters, music and imagery in the entire series, Goldfinger packs a gold-plated punch that’s the perfect mix of big-screen adventure and sophisticated action-packed extravagance. The first few minutes alone are as explosive as anything associated with 007, and once Shirley Bassey’s classic title track begins its first few unmistakable bars it only gets more exciting from there.

In this one, Bond – once again played by Sean Connery – is put on the trail of Auric Goldfinger (Gert Fröbe), a wealthy bullion dealer who’s also dabbling in a bit of gold smuggling. Upon closer investigation, which is only possible when Bond is captured by Goldfinger and his henchmen – among them the mute Oddjob (Harold Sakata) who can kill people with the throw of his bowler hat, and Pussy Galore (the recently-passed Honor Blackman) who acts as Goldfinger’s personal pilot – he discovers that Goldfinger is planning an ambitious assault upon Fort Knox, in an effort to not only devalue its billions worth of gold but also make his own supply far more valuable to the world.  It’s then up to Bond, of course, to put a stop to his scheme before he can succeed.

There is so much in this film that the entire Bond series owes its legacy to that it’s honestly hard to know where to start. Whether it’s the introduction of Bond’s car of choice, the Aston Martin DB5, or the concept of a memorable henchman with a unique way of disposing with people, Goldfinger helped shape Bond to become the cinematic icon we all know him to be today, and so with it comes a great deal of respect. It sets the bar high for these films, given how it features some of the more impressive action set-pieces of the Connery era – stand-outs include a car chase through a factory compound, which concludes with a car crash that’s alarmingly well-filmed (in that it looks so real that you wonder if the person driving the car at the time was okay afterwards) – and some of the funnier moments too, with the reveal of Pussy Galore’s name being a masterstroke of schoolboy snickering. Certain imagery that people associate with Bond in general is also here in this film, such as the gold-painted woman lying dead across a bed (an image that would be recreated to less memorable effect later on in Quantum of Solace), and most famously Bond being strapped to a table as a deadly laser beam slowly drifts towards his (thunder)balls. It’s honestly fun to see what would later become tropes of this series really start to come out and blossom for the first time, and to have them be done in a stylish manner thanks to Guy Hamilton’s tightly focused direction is simply icing on the cake.

The Goldfinger of the title is a worthy foe for 007, in that he’s menacing enough to leave more of an impression than the previous Bond villains, with actor Gert Fröbe – whose dialogue was mostly redubbed by theatre actor Michael Collins, since Fröbe struggled with his English – having lots of fun with the character’s wickedness and shameless attempts to cheat at games like cards and golf. Meanwhile, Pussy Galore is an enjoyable romantic foil for Bond, at first immune to his charms but one forceful romp in a barn later – a little too forceful, if you asked me; once again, the sexual politics of the time dictate that women become enamoured with the lead even when he’s forcing himself on top of them – and she, like most of us by this point, have completely fallen for Connery’s charms. It is to Blackman’s strengths as an actress that she is able to at least retain some semblance of dignity when succumbing to her romantic desires, and her steely gaze as well as her no-nonsense attitude make her a Bond girl not to underestimate, for which the recently departed Blackman will be sorely missed.

A fun romp from start to finish, climaxing with a tense fight sequence within the bowels of Fort Knox’s vaults, not to mention one of the all-time great Bond villain demises, Goldfinger is an important part of Bond’s ongoing legacy that retains its classic status with some great action, colourful characters, and some of the most iconic moments in the entire series to date. As of writing, I’ve yet to see the remaining Connery entries, but I’d be surprised if any of them can beat this one to the gold medal.

Goldfinger remains an important part of Bond’s cinematic legacy, containing some of the series’ most iconic imagery and characters, but is also a highly entertaining spy thriller with plenty of well-made action and suspense to keep things golden.

JAMES BOND WILL RETURN NEXT WEEK IN: THUNDERBALL