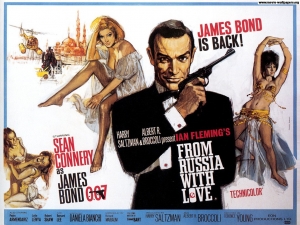 BASICALLY…: James Bond (Connery) becomes the target of an assassination plot when he is sent in to retrieve a stolen Soviet encryption device…

This week, Sean Connery’s reign as James Bond continues with From Russia With Love, a film that takes the flaws of Dr. No – mainly issues with pacing and tone – and not only improves upon them but also makes them work in a story that’s more intricate, precise and especially more action-packed than before.

The plot’s a little bit more complex this time around, though; the criminal organisation SPECTRE, upset with Bond’s actions in the previous film, plots revenge by luring the secret agent into a trap that will end in his assassination. This involves stealing a Lektor cryptography device from the Soviets, thereby aggravating both the East and the West, and Bond being sent to Istanbul in order to handle the situation personally; this last command is brought upon by a Russian woman named Tania (Daniela Bianchi), who has been hired by her Russian commander – now secretly working for SPECTRE – to lure him in, having asked for Bond herself. From there, all sorts of events unfold for 007, from a shoot-out at a rural gypsy settlement to an intense showdown on a train, not to mention a fight with a helicopter.

Unlike Dr. No, which struggled to settle on a right tone and also felt way longer than it was due to some pacing issues, From Russia With Love is much more sure of itself. The time breezes by a lot quicker this time round because it actually contains a lot more action and suspense, with director Terence Young once again shining in delivering some top-notch fight choreography in action scenes that have a lot more at stake, as well as a higher production value which means more stuff can be accomplished here. There are scenes in this movie that are as impressive as any modern-day action movie, including the aforementioned sequence involving a helicopter coming in at full speed to attack Bond, which is not only shot extremely well but really looks like it was nerve-wracking to shoot because, well, who wouldn’t be terrified by a helicopter swooping down towards you like the plane in North By Northwest? The action is such fun that the running time goes by a lot faster, and the inclusion of a more prominent musical score by John Barry makes it all the more exhilarating.

The character work is surprisingly strong here too; in addition to Connery continuing to be cool as hell, Daniela Bianchi has a charming screen presence as the film’s de facto Bond girl, while Robert Shaw is a far more intimidating and posable threat than Dr. No ever was, as an assassin hired by SPECTRE to trace and later kill the agent once he’s in his crosshairs. When you break their characters down, they are admittedly a little thin, but the actors do such a good job at making you interested in them that you really do want to know a lot more about what they’re really thinking in the middle of all of this. Special mention also needs to go to Mexican actor Pedro Armendáriz, who has a prominent role in the film as MI6’s head honcho in Istanbul; Armendáriz sadly passed away during filming after being diagnosed with inoperable cancer, and it is unclear how much his death affected his role in the film – apparently the production brought his scenes forward so he could film as much as he could before the inevitable happened – but the actor definitely makes the most of his limited screen time, bringing to life a character who, again, you seriously want to know a lot more about, as well as be around since he’s a lot of fun. This film also marks the first appearance of Desmond Llewelyn in the long-standing role of Q, who briefly appears near the start to equip Bond with his necessary gadgets, including a special suitcase and a rifle that’s incredibly easy to put together and take apart.

While the movie is in many ways stronger and a lot more confident than the previous instalment, its misgivings include, once again, a plot that can be surprisingly difficult to follow at times. I honestly struggled to condense this plot into one sentence at the top of this page, because there is an awful lot of stuff happening in this movie that makes it even harder to summarise what it’s truly about. Sure, you have the basics such as Bond being drawn into his own assassination plot and wooing the pretty Russian agent assigned to lure him in, but beyond that it’s filled with revenge plots, upsetting the balance between the East and the West, a thinly-veiled love story, and an espionage thriller. It’s weird, because in Dr. No the plot felt way too loose, and now in From Russia With Love there is way too much plot that’s all tangled up; at least the action is strong enough and the characters are likeable enough to keep the entertainment factor alive, otherwise the overly busy plot would render this a slightly confusing ride.

Plot aside, though, this is another solid Bond adventure that further solidifies the secret agent’s presence in cinema, and lets audiences know that he is no one-trick pony.

From Russia With Love boasts some strong action set-pieces and fun characters which make the film feel a lot more confident than its predecessor, though its overly busy plot threatens to get too tangled up in itself.

JAMES BOND WILL RETURN NEXT WEEK IN: GOLDFINGER