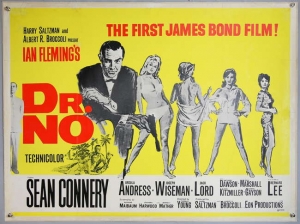 BASICALLY…: James Bond (Connery) is called in to investigate the disappearance of a colleague, which ties into a plot to disrupt the American space program…

This week, we’re taking a look at the one that started it all; in 1962, a year packed with enough drama to rival 2020 (so far) from John Glenn’s orbit around the Earth to the Cuban Missile Crisis, the world was charmed by a well-dressed Scotsman at a poker table, cigarette in mouth, uttering the three words that would become immortal: “Bond… James Bond”.

Right away, it’s easy to see how Sean Connery could captivate audiences on a global scale, and luckily Dr. No serves as an entertaining introduction to the character that we all know and love, as well as that iconic swagger the actor brought to the part.

For his first on-screen mission, it’s as routine as they come; Bond is sent to Kingston, Jamaica to investigate the sudden disappearance of the country’s MI6 station chief. Once there, he comes across a plot by the nefarious Dr. No (Joseph Wiseman) to infiltrate the American Space Program, and Bond – allying himself with CIA operative Felix Leiter (Jack Lord), Cayman Islander Quarrel (John Kitzmiller) and beautiful shell diver Honey Ryder (Ursula Andress) – sets out to stop him.

As far as franchise starters go, Dr, No certainly gets the ball rolling in suave fashion. As soon as the first few bars of John Barry’s timeless theme kick in over the very 60s title animation, you are thrown into a world of coolness, filled with slick fight moves, intricate lairs, a suave fashion sense, and even a fire-breathing dragon (don’t worry, it’s not as ridiculous as it sounds). All the way through, you are guided by Connery’s Bond who knows this world inside out, and seems so relaxed even in the most intense of situations that you can’t help but also feel at ease when danger comes round from every corner. Everything he does from socialising with local islanders to flirting with several women, it’s just simply cool – even though it does exhibit signs of the sexual politics of the time, which as we’ll find out later on in some of these movies doesn’t exactly hold water in today’s society – and Connery certainly carries it through his charm and undeniable screen presence alone.

While Dr. No definitely serves as a solid introduction to the character, the movie itself sometimes struggles to find the right balance between jaunty action-adventure and engaging espionage thriller. In this case, you have to cut it a little bit of slack because it’s the first one of these movies, and clearly the people behind it were still finding their feet whilst they try and pinpoint the exact right tone, so it is forgivable that the film doesn’t completely hit the mark. Even still, the tone of the movie tends to change every now and then; one minute it’s business as usual for Bond, and then the next it’s trying to lay some heavy Cold War parallels onto a scenario which, while it probably made complete sense at the time, feels somewhat outdated in 2020. The pacing of the film feels a little slow as well, which is amplified by a slightly eerie lack of score (save for, of course, Barry’s iconic tune which pops up now and then whenever Bond does or says something cool) that makes certain scenes feel like they’re going on for a lot longer than they actually are.

However, the important thing to remember is that these are merely teething problems for a film series still in its infancy; of course they’re not going to perfect Bond on the first go, but they’ve made damn sure that it gets off to a relatively decent start. It contains many of the trademarks that would be featured in many of the other movies, from Bond’s martini of choice to car chases that more often than not end with giant explosions, and all of it done with a relentless watchability that director Terence Young brings to the way it’s all filmed (dodgy 60s green-screen aside). The titular villain is certainly creepy in his dress sense alone, even if he’s not that big of a threat when you break it down – you get the feeling that Bond could easily take him down, given what exactly he’s missing from his body – and as for the first official Bond girl (and no, neither Sylvia Trench nor that Asian secretary count), Ursula Andress and her gorgeous dubbed voice is one for the ages. It’s also a movie where you can see the budget on-screen; the big explosion at the end (because of course there’s one) is impressive enough to compete with today’s pyrotechnics, and in some cases is actually more impressive because at least they really did blow something up, even if it was just a model.

While it’s unlikely to rank among the top tier of Bond movies by the time this retrospective series ends, Dr. No is a pretty solid start to one of cinema’s most beloved franchises, and a perfect introduction to everyone’s favourite spy.

Dr. No is a solid introduction to Sean Connery’s charismatic turn as James Bond, and to the character in general, in a film that certainly has issues with tone and pacing, but has some good action and suspense to pull it through.

JAMES BOND WILL RETURN NEXT WEEK IN: FROM RUSSIA WITH LOVE