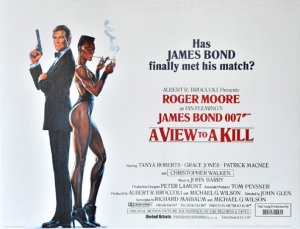 This week, the Moore era finally comes to a close with A View to a Kill, which is currently the lowest-rated entry of not just his movies but the whole series in general on Rotten Tomatoes at 36%, so going in it doesn’t seem like he’s departing on a high note, and coming out those expectations were met and then some.

Somehow, this one manages to feel like the most uneventful of Moore’s time as Bond, despite featuring sure-fire elements like explosions, car chases, and Christopher Walken, with little of the charm, comedy or even excitement that he managed to obtain during the high point of his tenure (which was most certainly The Spy Who Loved Me, the only Roger Moore Bond film to be a genuinely great movie), and instead very much feels like it’s running on fumes instead of a full tank of petrol.

This one sees Moore’s Bond investigate a stockpiling of microchips by industrialist Max Zorin (Walken), who as it turns out has nefarious plans to destroy California’s Silicon Valley, the electronic hotspot of the United States, so that he and his company can reign supreme in the field. Bond must, of course, swing in to save the day, thwart Zorin and his henchwoman May Day (Grace Jones), cosy up with geologist Stacey Sutton (Tanya Roberts), and pretty much everything else you’d expect to see in a Bond film by this point.

As pedestrian and formulaic as For Your Eyes Only felt, it at least used the familiar clichés competently enough to deliver a fine, if unremarkable, Bond adventure; A View To A Kill, on the other hand, doesn’t even seem to be able to do those ones justice anymore, as it lacks the focus and definitely the passion to make them feel as natural as they have been in previous entries. Due to that, it just comes across as boring instead of exciting, since you know each and every turn it’s going to make simply because you’ve seen it all before, and done in scenarios which honestly make a lot more sense than they do here. Whenever a secondary character appears alone on-screen, you’re just waiting for the bad guys to do away with them; the second that a villain introduces a countdown timer, you know that Bond is going to come in and either stop it or prevent it from causing too much destruction; and as soon as Bond – now looking alarmingly older than even the previous film just two years prior – unrobes to woo the significantly younger love interest of the scene, you can feel the shivers go down your spine because it’s now gotten to a point where it seems rather creepy for this mid-to-late 50s man to be seen seducing a then-37 year old Grace Jones and an even younger Tanya Roberts.

In fairness to Moore, it’s not like there’s much else he can do with Roberts, because she gives an astoundingly wooden performance that’s accentuated by her hollow eyes and dumb-as-a-doornail delivery, not to mention her continuously stupid actions which make it very hard for us to believe she’s in the field of geometry at all (similar criticism would later be hurled at Denise Richards as the world’s least convincing nuclear physicist, but more on that in about five weeks’ time). Acting circles around her is Grace Jones, who’s having a lot more fun playing up the bad on-screen and even has more of a spark with Moore than Roberts does, with even the ever-delightful Walken benefiting from her strong screen presence. As for Moore, putting aside the glaring age differences for a moment, he looks like he’s just about ready to hang up the suit once and for all here, similar to how Sean Connery seemed all but done the part in Diamonds Are Forever; his lack of enthusiasm does little to help boost the excitement levels this time, which makes it seem much more of a chore to watch when even the main star doesn’t seem to be that interested in what he’s doing anymore.

Dull action, an unmotivated plot, and characters who don’t spring to life as much as they should really do make A View To A Kill feel like a real dud of an outing, especially one that would eventually wrap up Roger Moore’s seven-film tenure as James Bond. His has been an era of mixed results; certainly a lot more tongue-in-cheek than the Connery and Lazenby entries, but with noticeably more let-downs than real successes (The Man with the Golden Gun pips this one as the lesser of his films, because at least Tanya Roberts wasn’t as completely useless as Britt Ekland was), which leads me to believe that the producers’ decision to lean more towards a campier tone didn’t exactly pay off. Luckily, the next film and the next lead actor would guide them towards the kind of tone a character like James Bond really needs…

A View To A Kill represents a series running on fumes, with dull action, an unfocused and messy plot, and characters who don’t even seem all that invested in what’s going on and make it feel a lot more of a slog to get through than previous entries.

JAMES BOND WILL RETURN NEXT WEEK IN: THE LIVING DAYLIGHTS