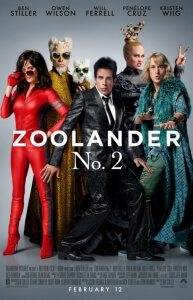 BASICALLY…: Former male models Derek Zoolander (Stiller) and Hansel (Wilson) must infiltrate the world of high fashion to solve a series of murders, while former nemesis Mugatu (Ferrell) seeks revenge after being released from jail…

Sequels to cult comedies are often hit and miss – for every Anchorman 2 and Austin Powers: The Spy Who Shagged Me, there’s a Hot Tub Time Machine 2 or Caddyshack 2, so you can see where the quality likes to vary (though we still maintain our belief that Dumb and Dumber To is still pretty funny as well).

But now, the granddaddy of them all, director-star Ben Stiller’s Zoolander – infamously buried at the box office thanks to a release date not long after the events of 9/11 – has finally stepped into the game and presented its own follow-up, fifteen years after the original and following years of speculation over whether it would be made at all. But where does it end up fitting among that parade of mixed-quality comedy sequels? More importantly, is the memory of the first one preserved or tarnished as a result of its very being?

The answer, quite honestly, is inconceivable.

We have absolutely no idea whether Zoolander 2 is even good or bad, because it is an unashamedly out-there movie in its own right that it’s hard to hate but also very difficult to praise like the first one.

Picking up some years after the first one, with male model Derek Zoolander (Stiller) being forced out of hiding and, along with former rival Hansel (Owen Wilson), recruited by Interpol agent Penélope Cruz (yes, we know her character has a name, but are you really going to call her anything else?) to infiltrate the world of high fashion and uncover a series of celebrity murders that lead to the unveiling of an even bigger conspiracy, involving former enemy Jacobim Mugatu (Will Ferrell).

To go into any more details would ruin some of the surprises, but even if we could we wouldn’t be entirely sure how best to phrase it in such a short amount of space. The first Zoolander was definitely zany, embracing its own silliness and allowing certain logic to take a back seat, but there’s a limit; Zoolander 2 knows no boundaries when it comes to its own nonsense plotting, turning out something that is not necessarily bad – we can think of way more comedy sequels of this kind that have been much worse – but also not even coming close to topping the original, because it is clinically insane. There are references to the Fountain of Youth which may or may not exist (in this odd world, anyway), sub-plots about Hansel somehow impregnating each and every one of his orgy friends, asexual models that combine both sexes into one and are played by Benedict Cumberbatch, and we haven’t even yet mentioned the head of SNL cast member Fred Armisan being pasted onto the body of an eleven-year-old boy. Even for fans of the first film, it is a trippy experience to say the least.

The film also likes to rehash a lot of the original’s jokes, not even putting a new spin on some of them but just flat out repeating them almost verbatim. Did you like the increasingly-strange orgy that the character partook in previously? Well, there’s at least a couple of them here too, and they’re both increasingly as strange as the last one. Remember when Hansel cited Sting as a pseudo-role model? Oh, that’s brought up once or twice here too. Do you have fond memories of Derek and his friends dancing about in a car with Orange Mocha Frappuccinos and listening to Wham!’s “Wake Me Up Before You Go Go”? Wash, rinse, repeat. The cycle goes on and on, shoving them down our throats until we can muster the words “we get it movie, they were in the first film”. It’s never up to The Hangover Part II levels of repeat, but the constant reminder of how funny the first film was does get a little old after a while, and we’re praying that this one actually remembers to be a movie.

Outside of the repeat, the humour is certainly still there and even got a good few laughs out of us every once in a while, even if sometimes it was just to respond to the pure insanity of it all. However, it can be very sporadic and, keeping with the levels of laughs we usually get in a film directed by Ben Stiller, very inconsistent. Tropic Thunder, for instance, doesn’t become consistently laugh-out-loud hilarious until the halfway point, and even the first Zoolander has a few jokes that never quite grown into what they were intended to be. Zoolander 2 is no different, with most of the laughs not arriving until Ferrell shows up again as the hilariously over-the-top Mugatu late into the film’s second act, and until then they’re very hit and miss.

However, on top of everything including the endless amount of cameos that would take a much longer review to go into further detail, Zoolander 2 is a completely bonkers movie – not just a bonkers comedy sequel, but a bonkers movie in its own right. Again, we can’t really come to a reasonable conclusion about whether it’s even good or not; we’re still rattling it about in our tiny little minds over whether our sanity can be recovered as a result. At least it has the power to do that.

Zoolander 2 is not among the worst comedy sequels, but is too bizarre and insane to even be called one of the better ones, although its hit-and-miss humour that either rehashes old jokes or just goes far beyond what some consider to be normal undoubtedly make it a film that can’t quite keep up with its much more liked predecessor.