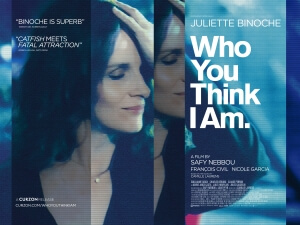 BASICALLY…: A middle-aged divorcee (Binoche) creates a fake social media profile for a 24-year-old woman, and connects with a younger man (Civil) who has fallen for the fictional woman…

With social distancing becoming the new temporary norm, a movie like Who You Think I Am debuting now feels strangely appropriate. Originally scheduled by UK distributor Curzon Artificial Eye for a mid-May debut, the film was moved up to over a month earlier for audiences to enjoy during the (figurative and literal) heat of the COVID-19 outbreak, but I suspect the film’s core theme of a relationship being carried out without either party being anywhere near each other was an opportunity that the distributor could not pass up.

Whatever the underlying reasons may be, the fact of the matter is that they’ve brought out a pretty solid release of theirs early, and with some strong performances as well as a deeply emotional and sometimes racy look at mid-life loneliness and desire, it’s a very gripping piece of work we’re glad to welcome prematurely.

Juliette Binoche stars as Claire, a divorced mother who we first meet as she’s meeting with her new psychotherapist (Nicole Garcia) and relaying her story to her. We then learn that, as a means to spy on her distant younger lover Ludo (Guillaume Gouix), she creates a fake Facebook profile, posing as a 24-year-old named Clara; soon, “Clara” attracts the attention of Ludo’s friend Alex (François Civil), and the two strike up an online romance. However, as Claire falls more and more for Alex, knowing full well that he will reject her if she reveals her true older self, her life starts to unravel, to a point where she becomes overwhelmed with guilt and, following a tragic turn, grief.

It would be incredibly easy to portray Claire as the unhinged protagonist in this situation, because when you break it down she is completely catfishing this vulnerable young man for, as we later find out, mostly selfish reasons; she is determined to retain her beauty, even as it fades with age (although, from a personal standpoint, Juliette Binoche seems to age phenomenally well), so she may continue to be desired by those around her. However, director and co-writer Safy Nebbou foregoes the finger-pointing and instead shows her in a much more sympathetic light, as someone who might be doing things that are morally questionable but is still a person trying to cope with life now that it’s reached this particular point. Claire, as Clara, feels her youth rejuvenated, beyond simply wooing her younger beau on Facebook Messenger, leading her to feel more alive than she has done in years, and Nebbou shows her rebound of self-confidence arise at a realistic pace, so that it makes sense why she continues the fake identity even beyond a certain point. However, you are also waiting for the other shoe to drop when it comes to facing reality, and when it does things become far starker, and in a way fantastical, than the movie first lets on. It’s all tied together by Binoche’s top-tier performance, which expertly conveys so many emotions in a matter of seconds without even a word of dialogue, and who you instantly sympathise with despite the wrongness of what she is doing. It’s one of the actress’s finest turns in a long while, because she completely engrosses you in the life of someone who, in the wrong hands, could have turned out far more problematic than she is.

The movie reminds one slightly of Spike Jonze’s Her, another film in which a person develops romantic feelings for someone who we almost never see in person (for the first half, we mostly just hear François Civil’s voice as Alex, until he becomes more prominent in the second half), and there is also a shared theme of a less-than-fond appreciation for the reality of growing older, but here there is a far greater emphasis on the latter which it ultimately explores with quiet sorrow. Again, Claire’s initial intentions are purely to satisfy her own insecurities, but as it goes along we do get to see her as someone who has gone through a pretty rough divorce – her husband left her for a younger woman – and feels like their happiness has been taken away from them as a result, and at the age she currently is it feels like there’s not much hope left, except for the younger man she fancies who doesn’t even know what she looks like in person. Through his comforting messages, not to mention an extremely racy solo sex scene in a car, she feels like her age is just a number, which for someone experiencing clear signs of clinical depression are vital for their own mental well-being. Nebbou is smart to portray her catfishing practises as not so much creepy and stalker-ish (although it does give off that vibe whether it wants to or not) but more tragically desperate, and Binoche is even smarter for making her character transcend even the loosest of scorned stereotypes by offering her as someone who needs help as much as she needs an outlet to feel like a complete person again.

It’s a drama that explores some deep and meaningful themes that should resonate well with people of that age bracket, and while not all of the drama makes as big an impact (a couple of twists later on arrive with more of a thud than a dramatic crash) it’s portrayed intriguingly enough that you are invested in how this particular journey ends, and especially in Binoche’s performance which, in these days of social distancing, may well be the role model for online chatting that we need right now (albeit without the falsifying of identities on social media).]

Who You Think I Am is an intriguing drama which explores the harsh realities of middle-age and also the burning desire to reclaim a sense of youth, in a story with some decent twists and turns that are held together by sensitive direction by Safy Nebbou and a powerhouse lead performance by Juliette Binoche, who delivers some of her strongest work in years with this film.