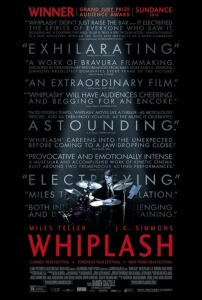 The title Whiplash is appropriate. Aside from being named after late jazz composer Hank Levy’s musical piece, which features prominently at various points, writer-director Damien Chazelle’s second feature film (yes, his SECOND; and all on the cusp of age 30. Just let that sink in for a second…) leaves you feeling breathless, as though you’ve been hit by a car while driving and there’s a sharp pain in your neck, and the adrenalin is kicking in so fast that it masks the pain perfectly.

Not a moment goes by when you feel bored or unengaged, with the sharp and fast-paced editing coupled with Chazelle’s carefully-pinpointed direction and tightly-wound screenplay keeping you on a constant loop throughout. This reviewer may not know much about music or its various instruments – they couldn’t even get “Jingle Bells” right on the piano during Music class at school – but like any other form of entertainment it is undoubtedly as cutthroat as you can get, and Whiplash demonstrates the hardcore notions one can undertake to an intense and even terrifying note. More than anything, it is a tale of perfection, being to drumming what Black Swan was to ballet; the desires of its main characters Andrew Neiman (Miles Teller) and Terence Fletcher (J.K. Simmons) to achieve the levels of jazz greats like Charlie Barker and Louis Armstrong are so strong and so fierce that their obsessive methods can be borderline psychopathic. But as frightening as their individual methods can appear to be, they are each driven to their primary goal of being – or, in Fletcher’s case, teaching – the next great musician of the 21st century, and this is a disturbing account of two people who are far too obsessed or arrogant to slow things down.

Teller’s quiet heartbreak and fierce determination may be at the centre of the film, but by far and away it is Simmons who ends up walking away as the man of the hour. Having been only known for his character work for most of his career, with his only recognisable work up to this point being cynical newspaper editor J. Jonah Jameson in Sam Raimi’s Spider-Man films, Simmons finally has a truly iconic character to call his own, and by God does he nail it here. To say that his character’s teaching methods are monstrous and abusive would be an understatement; Fletcher is a nasty piece of work, pure and simple, inflicting psychological and emotional torture on his highly-strung pupils and all in the name of perfection. Even as he tries to justify his terrifying methods later in the film, it’s still a warped sense of view that the character inhabits and Simmons more than excels in bringing the humanity and passion into such a horrific person. Though Teller, who has a strong year ahead of him with Divergent sequel Insurgent and Josh Trank’s Fantastic Four reboot, packs the heroic stabilities well yet doesn’t entirely earn our sympathy for his damaging ego and treatment of those around him – his break-up with girlfriend Nicole (Benoist) is painfully blunt and condescending to say the least – it is Simmons who in the end manages to walk away with the film, shouting abuse at anyone who tries to snatch it from him.

There’s really not much else we can say about Whiplash without retreading the points we’ve made in the past few paragraphs; Chazelle’s direction and writing is very strong, the editing is slick and fast, the performances – especially Simmons in a role surely to bag certain gongs in this last lap of awards season – are unbelievably committed; and it’s a terrifying tale of how perfection drives someone to their limits.

But if there was something else to talk about, it would be that it leaves you truly EXHAUSTED by the end. As effective as that quick editing can be – it cleverly keeps in tempo with its jazz-heavy soundtrack whenever it plays – it also means a lot of cuts from here to there which doesn’t leave you entirely able to sink in the atmosphere or sometimes even the situation. The way they are used during the film’s climactic set-piece, in particular, is equivalent to a case of ADHD; there are just so many things to concentrate on at once, but as soon as we are allowed to focus on one angle it suddenly cuts to another, and another, and another. We’re not saying that it damages the film in any way, and more likely than not it was the film’s intent for it to be so shifty, but be prepared for the fact that by the time Chazelle’s writer-director credit first pops up at the end you’ll be needing a good nap – or, at the very least, a refreshing drink to calm yourself down.

In the end, though, if a film like Whiplash leaves you feeling like you’ve just experienced, well, whiplash, then at least it’s done its job in being as effective as possible for the viewer. Just be wary that you may need an ice pack to rest your neck on when it’s over.

Whiplash is a fascinating, intense and even terrifying tale of perfection, boosted by Damien Chazelle’s strong writing and direction, two fantastic lead performances with J.K. Simmons standing out heavily, and some fast-paced editing that will either leave you entranced or exhausted. To contradict Fletcher’s views, we say to this film, “good job”.