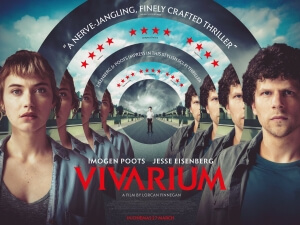 BASICALLY…: A young couple (Eisenberg and Poots) becomes trapped in a never-ending labyrinth of new houses…

Finding and purchasing a home as a first-time buyer is such a daunting prospect, that it’s somewhat surprising nobody thought to turn it into a horror movie before. Luckily, Irish filmmaker Lorcan Finnegan is here to fill that gap, with a film that will fundamentally make you think twice about applying for that mortgage – or at least, in this nightmarish version of suburbia that he and writer Garret Shanley have conjured up.

Vivarium starts with young couple Tom (Jesse Eisenberg) and Gemma (Imogen Poots) keen on finding somewhere to live together, and they pay a visit to an extremely odd estate agent conspicuously named Martin (Jonathan Aris), who takes them to view a new-build property on an uninhabited estate full of identical-looking houses. However, when they try to leave after Martin mysteriously vanishes, they find themselves unable to escape the seemingly endless labyrinth of houses, trapped as the only inhabitants on the entire block. Things are already bad enough, but then they are suddenly gifted a baby boy who they are instructed to raise if they are to be released.

Where things go from there, it’s unpredictable to say the least.

Like the best episodes of The Twilight Zone or Black Mirror (in fact, Finnegan previously worked for the latter’s creator Charlie Brooker), the film really plays on the psychology of normal things, in this case buying a house and starting a family in that house, and pointing out how absolutely banal and draining the whole experience can have on a person’s mental and physical health. As the plot develops, and the mystery gets deeper and deeper, you feel the absolute life being drained out of these two lead characters, who not only have to contend with the fact that they are effectively being held hostage by an unseen and unknown force, but are also being forced to act as guardians to a child who, for lack of a better phrase, is a total demon. This kid, who is essentially Damien from The Omen crossed with Veruca Salt, makes Tom and Gemma’s lives a living hell, for no other reason than because he and whoever is running everything behind the scenes is an utter shitbag who enjoys screwing with people, and the two unwilling de facto parents amusingly make it no secret how much they hate this little boy’s guts, but at the same time you can just feel how this unwanted burden is just sucking away at their souls until there is nothing of them left to give.

Finnegan and Shanley do an effective job of making you feel these two people’s frustrations and misgivings, because they are written to be fleshed-out characters who you feel more and more sorry for when you see what exactly they have to deal with on a day-to-day basis. It also doesn’t hurt that they are played very well by both Eisenberg and Poots who do a strong job of making you feel their utter frustration and defeat through every single step of this living nightmare. However, very special mention needs to go to young actor Senan Jennings, who at not even 10 years old turns in one of the creepiest child performances in years; a lot of that comes from not just his unsettling facial expressions and overall physical presence – he’s small, but by God does he tower over our poor protagonists – but also the fact that, thanks to some audio distortion and some uncredited redubbing wok by co-star Jonathan Aris, there is a seriously disturbing voice coming out of this young boy’s mouth. He has the face of a 7 year old, but also the voice of a 16-year-old; the effect is so unnerving and bone-chilling, sounding so wrong in both the best and worst ways, that it’ll have anyone hoping to start a family instead see about getting a full vasectomy. This is seriously one creepy kid, and what he eventually grows into will perhaps haunt you even more, but the less said about that the better (for now).

The film has an eye-opening style to compliment its eerie script and performances, with the seemingly never-ending suburbia calling to mind the streets and homes of certain Tim Burton movies. Everything looks so fake and manufactured, right down to even the clouds looking more like carefully sketched drawings than anything real, that it just adds to the surreal nature of it all, as though we have stepped into a nightmarish version of one of those jolly advertisements for real estate firms that you sometimes see on the TV. Finnegan clearly takes after Burton somewhat when it comes to the overall designs, with the endless parade of identical homes sporting a ringing resemblance to the artificial world of suburbia from Edward Scissorhands, and even the cinematography sporting a bleak and slightly gothic vision of the idyllic environment that aligns with how some of Burton’s earlier movies tended to look at times.

I feel that the film will resonate with anyone who has fears of jumping onto the property ladder for the first time, especially those who can’t muster up the courage to even visit an estate agent to obtain advice, and to horror fans who like a bit of twisted Twilight Zone-esque storytelling that takes these social fears and amplifies them by magnitudes. Whoever may enjoy it, there’s no denying it’s a promising breakout for a new filmmaking voice that already feels at home.

Vivarium is a stylish and endlessly twisted nightmare that plays heavily on the fears of being a first-time home buyer, using surreal and otherworldly imagery that director Lorcan Finnegan flaunts with expert pacing that builds more and more on the mystery, topped with memorable turns by Jesse Eisenberg, Imogen Poots, and especially young Senan Jennings who delivers one of the creepiest child performances in recent memory.

Want to decide what the movie’s like for yourself?
Check out Vivarium showtimes in London
via