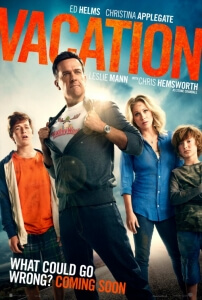 BASICALLY…: Rusty Griswold (Helms) decides to take his family on a cross-country trip to theme park Walley World, and everything that can go wrong does…

As yet another modern revitalisation of a comedy classic, this time taking its cues from National Lampoon’s Vacation with Chevy Chase in the starring role, the new version of Vacation has received some pretty damning feedback from various critics. Words like “unnecessary” and “repugnant” have been thrown about, and it’s becoming one of the most hated films of the year.

As you can imagine, we went in with severely lowered expectations – and that surprisingly helped our viewing experience. Not that Vacation is technically a good movie, but from what we had heard we were expecting something much, much worse and instead got something that’s just overall mediocre.

If you’ll remember from watching that original movie, which also had director Harold Ramis and writer John Hughes attached to it, it was simply about a disastrous family trip to Disneyland knock-off Walley World. Same thing here, except more of a focus on juvenile sex and bodily fluid jokes. Except in this version, now written and directed by the guys that wrote Horrible Bosses, the son from that first film is now grown up and looking a lot like Ed Helms, and is taking his own family to the theme park, including his unsatisfied wife (Christina Applegate) and two sons, one of whom feels like a missing cast member of The Inbetweeners (Skyler Gisondo) and the other is a bullying little snot (Steele Stebbins) who takes every moment of his spare time to humiliate or torture his wimpy older brother. A far cry from Chase and his own chipper family, then; and we would not fault you in the slightest if you despise this movie based purely on your adoration for the original film and its multiple sequels.

We, however, usually like to go in with a fresh mind, and not having even seen any of the previous Vacation movies (it’s on our ever-lasting to-do list) leaves us without the ability to compare it to what came before, although from what we gather the humour in those films are nothing like the kind we get in this movie. This one feels more tailored to the post-Hangover crowd, right down to casting Ed Helms, with tons of gross-out gags and an aggressive back-handedness that only seems to target the mid-teen crowd instead of anyone else. Given the severe backlash that the Hangover films have received in recent years, even the first one, it’s surprising that people still consider gags like attempted murder with a plastic bag or a wad of pubic hair being used to scrub down a bath with blood stains and fungi worthy enough to be included in adult comedies without receiving endless amounts of disdain. We haven’t even mentioned the scene that’s all over the trailers – where Helms and co relax in an open-air lagoon, only for it to really be a dumping ground for raw sewage – which, given this film’s enjoyment of swimming within its own shit, sums up the movie for all that hate it.

Honestly, though, our biggest problem with the movie is that it just isn’t that funny. Not every comedy needs to be completely gross-out, and Vacation is a prime example of that; when your movie opens with Ed Helms being forced into a child’s lap head-first, you know you’re in for a ride where the bar is lowered to significant depths several dozen times, from misunderstandings about what a rim-job is to enlarged prosthetic penises worn by Thor himself, Chris Hemsworth. Even though we never saw the original Vacation movies, we can still tell that they never embodied the kind of humour that American Pie or The Hangover were aiming for, and while a brief penis or poop gag is amusing every once in a while, when it’s the whole movie it can get tiresome very quickly. The only funny elements of the film are montages of awkward holiday photos that bookend the film (though the opening slideshow is much funnier than the one that plays over the end credits), and brief cameos by Chase and on-screen wife Beverly D’Angelo later in the film, both reprising their original roles in a sort of torch-passing extended cameo. Other than that, it’s a series of set pieces that aren’t funny with bundles of comedic actors given very weak material to work off of – Christina Applegate, for example, is subject to one particular set-piece that sees her puking gallons of fake vomit while being subjected to a particularly dangerous obstacle course, even for the scene’s setting. Give her some credit, at least she seems game to go with the flow, but even still it’s very embarrassing for someone who can be very funny when they want to.

So, with all of that said, is Vacation deserving of being called the worst movie of the year? Honestly, no; we’ve seen much worse so far this year, and in our opinion we’d rather sit through this one again over Unfinished Business, Hot Pursuit, The Gallows or any of the other really bad ones. However, that doesn’t mean it’s necessarily worth recommending, either; if you’re sick of the constant gross-out and mean-spirited humour that American Pie or The Hangover worked with in the past, or if you absolutely adore the old Vacation movies and don’t wish for their good name to be tarnished, then you should definitely skip it.

It’s bad, but it’s definitely not the worst; at the very most, Vacation will become just another forgettable cash-in of a franchise nobody talks about anymore. Bit of a wasted journey, if you asked us.

Vacation isn’t as bad as everyone has made it out to be, but it’s still not worth recommending thanks to its lack of humour and tired use of gross-out gags to replicate the success of The Hangover, alienating fans of the original in the process.