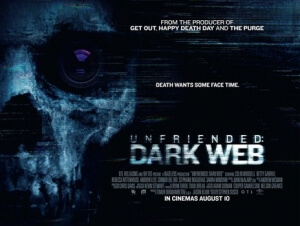 BASICALLY…: A group of young friends chatting online face the horrific consequences when one of them finds and opens some disturbing files on a found laptop…

When the first Unfriended movie debuted a few years ago, it quickly gained attention for doing something no major film up to that point had ever done before; have the whole thing unfold from the point of view of a laptop screen, with actors performing in front of their webcams on software like Skype and FaceTime, with the cursor practically in a starring role as it opened up several more windows towards Facebook, YouTube and Spotify, among others. It wasn’t an entirely new concept even back then, and today it continues to be used to similar effect, including the forthcoming Searching which opens in cinemas at the end of this month, but Unfriended is largely considered to be the one to bring this particular gimmick into the spotlight, and on top of that it was a pretty ridiculous but somewhat effective and even occasionally smart found-footage horror movie which made it even more entertaining.

A film like Unfriended was bound to get a follow-up considering its initial success with audiences and a handful of critics, and luckily Unfriended: Dark Web takes the logical step by turning this into an anthology series, with each new film apparently having a different scenario and threat while always being told from the perspective of the main character’s computer screen. It’s logical because it allows for writers and filmmakers to really explore the possibilities that can come from making our over-reliance on computers and social media seem extremely scary, or at the very least unnerving, not to mention how nowadays, when fake news and online data privacy are major talking points, a movie based around people having their lives destroyed whilst using their laptops and camera phones is and always will be pretty timely.

The screen that literally provides a window into this story “belongs” to a guy named Matias (Colin Woodell), who’s playing a game of Cards Against Humanity with his friends via Skype, whilst also trying to communicate with his deaf girlfriend Amaya (Stephanie Nogueras) on Facebook – I used quotation marks around the word “belongs”, because the laptop he’s using is actually one that he found and stole from a lost-and-found basket, and it doesn’t take long for the original owner, a pixelated figure named Norah C. IV who can apparently hack into anything at any time, to track Matias down and demand his laptop back. Matias is about to comply, only for him and his friends to discover a collection of files that are being shared on the dark web, which involve some pretty disturbing mutilation and penetrative content; right away, Matias is warned against calling the police or else Amaya will be killed, leading him and his friends to continuously fall victim to the hacker’s torment as the night goes slowly by in suspenseful real-time.

Though the gimmick is exactly the same, this is a very different film than the first Unfriended, which leaned way more towards a supernatural element and themes of cyberbullying as well as a cast of mostly teen characters, whereas this one is a much more person-centric movie with very real threats and characters who are old enough to not be complete douchebags. Looking back on that first film, which I remember thinking was pretty decent for what it was, I do now think that the supernatural element really did kind of make the film lose any sense of realism it was clearly going for, and it did just kind of turn into yet another paranormal ghost movie that happened to take place entirely online. There’s a bit more understanding and thought put into this film, as it uses the gimmick in a much more grounded manner, with the focus being on people who do horrible things to other people because they can, which can be a lot scarier than a ghost leaping towards the camera as a person screams. In that sense, the film has stronger footing, as it does with how it slowly builds suspense and gives you enough time with these characters to tolerate them at the very least; it doesn’t leave you bored or your intelligence insulted like some other found-footage movies tend to do, and for a good chunk of the movie I was on board with where this movie was going.

It wasn’t until things started coming to a head in the final act, though, when I found myself not feeling too great about some of the choices made with the fates of some of these characters. From a certain point onwards, it does become an online slasher movie with some rather grim and exploitative death scenes that leave you more uncomfortable than truly scared, and the worst part is that it’s happening to a bunch of characters who aren’t necessarily bad people, and don’t really deserve some of the things that the villains are inflicting upon them. Admittedly, all of this probably springs from a bad decision made early on that, if done correctly, probably would have made the story much shorter and less gruesome, but even still where it ends up going and how it actually ends (in one of two ways, seeing how there were two alternative endings to this film with a different one added to random screenings) leaves you with an unpleasant taste in your mouth,  as it can be pretty mean-spirited depending on your point of view.

As “onlinesploitation” movies go (a phrase I am now coining right here and now, unless someone out there can come up with something snazzier), Unfriended: Dark Web has its moments, but ended up being a bit too dark for my tastes.

Unfriended: Dark Web has a stronger foot in reality than the first film, but it ends up going a slasher movie route that leaves a bit of a rotten and mean-spirited taste in your mouth.