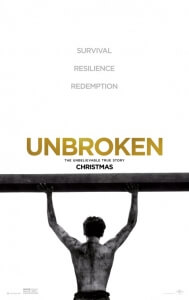 BASICALLY…: Olympic athlete Louie Zamperini (O’Connell) enlists as a bombardier in the Second World War, survives for over a month at sea after a crash, and is captured by the Japanese and placed in a POW camp…

There’s no doubt that Louis “Louie” Zamperini led an extraordinary life. Originally an Olympic track runner, then a soldier during World War II, then a prisoner of war (after surviving a lengthy time at sea) and finally a renowned Christian, it seems that the life story of this man – who passed away earlier this year at the grand old age of 97 – is prime material not just for a movie, but for an awards-worthy movie. After all, it has everything a certified contender needs: a heroic figure, a devastating historical environment, moments of uplifting sentimentality, and an inspiring spirit – so it only makes sense that director Angelina Jolie (on her second directorial film after 2011’s In The Land of Blood and Honey) pushes as hard as she can to make the resulting movie Unbroken feel as crowd-pleasing as it possibly can be.

So why, at the end of the day, does it feel like an inferior product?

There’s technically nothing wrong with Jolie’s direction – when the film calls for it, there are moments of suspense and dread, and Jolie manages to convey these parts to an acceptable degree. There’s also nothing wrong with the way the film looks; in fact, it’s gorgeous. Roger Deakins is on board as the DP, and as always he crafts some beautiful imagery from even the most insidious of environments (this is a man who can even make a small, contained Japanese holding cell look stunning, even when it can be shrouded in absolute darkness). Throw in some impressive set and costume designs, as well as a fine score by Alexandre Desplat (not his strongest of the year, though; that one still remains his work on The Grand Budapest Hotel), and you have one handsome-looking movie.

There’s not even a bum note within the cast, who are all well-chosen and perform to the best of their abilities. Leading the pack is Jack O’Connell, rounding up a breakthrough year after turns in Starred Up and ’71 with his fierce and dedicated turn as Zamperini; his display is impressive, and you can certainly identify a lot of the character’s emotions and thoughts through simply his facial expressions alone. While he’s unlikely to rank among the top five Oscar choices for Best Actor, he’ll at least have made a strong argument for his consideration. Elsewhere, Japanese pop singer Miyavi makes his film debut as the sadistic commander of the Japanese POW camp the main character ends up in, and though his youthful face may cause a few giggles by those unwilling to take him seriously there is a sense of pure sadism in his eyes, if one looks hard enough. Domhnall Gleeson has some effective moments as a fellow soldier surviving alongside Zamperini, while Garrett Hedlund is mainly just filler in a role that could have been played by anyone.

Now that we’ve established that the film does indeed have some strong visual attributes, from its directing to its acting, what is it specifically that drags Unbroken down beneath the surface?

Is it that it’s trying too hard to Oscar-worthy, and that it can be off-putting for cynics? You can make something of an argument for that, seeing how the promotional material was manipulated in a way to make you think it was ticking all the boxes for awards glory. However, as obvious as it is in trying to target voters and Academy members, we wouldn’t necessarily call that the ultimate reason why we think it doesn’t work; after all, when one looks back at previous contenders they didn’t necessarily have to be certain things in order to get attention.

That’s when it hit us: the reason we’re not so taken in by Zamperini’s story is that we’ve already seen these elements of Zamperini’s story before in other films, many of them awards contenders. For instance, doesn’t the lengthy Japanese POW sequence remind one of The Bridge on the River Kwai? Doesn’t the section dedicated to Zamperini’s time at sea on a makeshift raft seem familiar to anyone who saw Life of Pi? And isn’t the rushed montage of his practises of running track before his eventual competing in the Olympics with family and friends tuning in via radio reminiscent of Chariots of Fire, or indeed every other sports film ever made? This particular story has apparently been circling around in the developmental stages since the 1950s, when his film rights were originally optioned, and you can definitely tell it’s a story that hasn’t particularly aged well, especially after all these other films came about and borrowed plot elements for their own stories. It just doesn’t feel as fresh as it would have done all those years ago, and in today’s desired needs for more original and exciting content that’s a huge problem.

There’s also not much ground for the story itself, at least in plausibility. It certainly sounds like it could have been an incredible experience to live through, but on film there’s not much to offer in pure suspense or drama; the biggest conflict in the entire film is between Zamperini and a Japanese prison guard who’s just kind of a dick. There’s nothing to leave us guessing whether he’s going to survive or not, when we’ve already established that he lives to almost a hundred years old. As a result, we’re left to watch someone get beaten and tortured for almost two and a half hours – think Passion of the Christ, only with half as much Jesus imagery – and feel exhausted after going through it, almost like a torture exercise in and of itself.

By no accounts is Unbroken a great movie, nor is it anywhere near a bad movie neither – it’s certainly beautiful, but also extremely hollow within its centre. Insert your own Angelina Jolie punchline here.

Unbroken is a handsome visual effort by Angelina Jolie’s direction, Roger Deakins’ wonderful cinematography, and a fine cast led by a dedicated Jack O’Connell – however, it’s a sadly out-dated story of an inspiring individual, paving the way for one too many genre clichés that prevent it from being anything truly special. It’s still an okay movie, but certainly not the prime awards contender we were expecting (this should bode well for Boyhood and Birdman, then…)