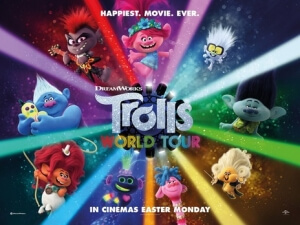 BASICALLY…: Poppy (Kendrick) and Branch (Timberlake) must save all troll tribes from the impending invasion of Hard Rock Queen Barb (Bloom)…

Although my review for the first Trolls movie back in 2016 wasn’t exactly glowing (example quote: “it’s not the worst family film I’ve seen this year, but that’s like saying one dose of laxative is better than two, or even three – whatever the case, you’re still going to end up with crap.”), I’ve seen it a couple of times since then, and have now come to the conclusion that, while it’s still very much a “meh” from me, it was something that just wasn’t made for me. It’s primarily for little kids, who have of course responded far greater to the bright colours and jumpy music than most adults seem to have, and it’s because of them that not only has a franchise launched from its success – ironic, seeing how the film itself was based on an existing toy line – but a big and bombastic sequel has now arrived to capitalise on the popularity while it’s still fresh.

The result, as seen on-demand thanks to Universal’s ballsy distribution move due to the coronavirus outbreak? Trolls World Tour is definitely a sequel to Trolls, for better or worse, and those who liked the first one will enjoy this just fine while those who didn’t will not be won over. For me, once again, it’s another strike on the “meh” chord.

In the sequel, Poppy (Anna Kendrick) – now Queen of the Pop Trolls – learns that there are other tribes of musical trolls out there, all based around different genres of music: classical, techno, funk, country, and rock. What’s more, the Queen of the latter tribe, Barb (Rachel Bloom), is going around to each group and taking their music so that she can unite all the trolls under her preferred rock. Determined to keep all trolls in harmony, Poppy and her friend Branch (Justin Timberlake) set out to stop Barb before she can obtain the strings of each strand of music, and destroy everything they’ve ever known in their society.

As in the first film, there are plenty of trippy visuals to ogle over, from the strange designs of the creatures and several trolls themselves to the seemingly patchwork plains that characters walk over. This is a world where everything seems to have a face, including the sun and even a tiny flute (animated with slower frame rates to look like it’s stop-motion, in a nice little touch), and that stuff is either terrifying or strangely enticing depending on your taste for out-there styles such as this. It certainly has an interesting enough visual flare to keep your attention for the most part, and like it was in the first film it’s the most stand-out element here as well, because it seems to be the work of highly imaginative animators who went into work everyday high as a bloomin’ kite, so in a weird way I give props to them for making this whole world look and feel so outlandishly weird while also appropriate enough for the target audience. Think the Pink Elephants sequence from Dumbo but feature-length: that’s the kind of weird we’re dealing with here, and once again it’s fascinatingly odd.

A shame, then, that conceptually not much else of the movie comes close to competing with it. The soundtrack is, once again, littered with jukebox tracks that feel like pandering towards fans of all these different music genres, some of which aren’t even performed especially strongly (Rachel Bloom, as musically talented as she clearly is – see any episode of Crazy Ex-Girlfriend for further proof – she can’t quite hit the right notes required for songs like Heart’s “Barracuda”) and seem totally disingenuous towards their very nature. Despite the odd earworm now and then, it’s a very made-by-committee soundtrack – produced in part by Timberlake, who seems desperate to score another Oscar nod after being recognised for the first film – which, again, young kids won’t mind too much but for older audience members such as myself, it’s hard not to see past the sugar-coated cynicism on display.

Seeing it at home and not in the cinema feels all too appropriate for this film, because it definitely gives off some serious direct-to-video vibes not unlike the numerous Disney sequels, only this one clearly has a little more ambition and certainly a bigger budget than a lot of them. We’ll probably never know if the overall experience is any better in the cinema, but the way that the plot is set up, how certain character arcs are played out, and even what the choice of songs for the overly-manufactured soundtrack seem to be, it feels like something that was naturally designed to bypass cinemas anyway and head straight to video, just to continue keeping the brand name alive without worrying too much about potential financial losses. In that regard, it feels less genuine than even the first film, because while that movie wasn’t all that great either, it at least made a few bold attempts to justify its existence as a corporate spin-off of an existing property; this one doesn’t take as many risks, not even in the visual department, and settles far too neatly into being a cute but somewhat shallow continuation of a franchise made exclusively for young children.

Again, though, I shouldn’t get too mad because I am not the target audience for the Trolls franchise, but at the same time it shouldn’t be too hard for these filmmakers to strive to be anything beyond just simply “meh”; yet, they continue to deliver films that don’t quite have the beat down.

Trolls World Tour is a sequel that will mostly please the young target audience, but for older demographics it’s more of the same with some admirably trippy visuals as well as a pandering soundtrack and a disingenuous energy which, much like the previous Trolls film, can’t entirely shake away its cynicism.