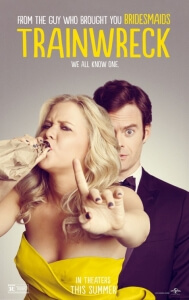 BASICALLY…: Amy’s (Schumer) lifestyle of sex and debauchery without the fear of commitment is challenged when she meets sports doctor Aaron Connors (Hader)…

If you’ve ever seen one of her sketches from her Comedy Central show Inside Amy Schumer – and if you haven’t, then there’s a whole slew of them on the official YouTube channel for your viewing pleasure – then you will know that Amy Schumer is a comedic talent worth watching. Her mixing of social satire with the harsh truths of gender politics makes for a delightfully wicked couple of laughs while also saying something omnipotent about the collective nature of female integrity that no-one else is confident enough to address.

Her feature debut Trainwreck, in which she stars as well as provides the screenplay for, doesn’t quite have the sharp tongue as some of her more edgy material does, but it’s still a good, if sometimes challenging, watch.

Judd Apatow directs a film that for once features neither Seth Rogen nor real-life wife Leslie Mann in any way shape or form– shocker! – which stars Amy as, erm, Amy, who in this universe is a slacker who drinks, smokes pot and engages in several one-night stands with various blokes, including a cameoing John Cena as a muscly protein-obsessed bodybuilder. She is also a reporter for snarky women’s magazine Snuff, and is assigned by her fiery boss (a glammed-up Tilda Swinton) to write a piece on sports doctor Aaron Connors (Bill Hader) – as typical rom-coms go, they meet and fall in love, although the roles are reversed slightly; Amy is the commitment-phobe, reluctant to let go of her wild lifestyle, while Aaron is the one pining for something more out of their relationship. If that weren’t enough, Amy also has to deal with her strained family, including pregnant younger sister Kim (Brie Larson) and her obnoxious father Gordon (Colin Quinn), the latter of whom Amy is particularly close to.

Like any other film that Apatow directs, the pacing can be a little off with the running time being longer than necessary and the inclusion of scenes that could have very easily been cut or at least been added to an Extended Cut for the DVD, but there is definitely something there in terms of heart and it comes across in how he chooses to direct his actors. What sets this apart from his other films, however, is the fact that he shares no writing credit; this is most certainly Amy Schumer’s vision through and through, it just happens to be shot through Apatow’s lenses. As such, the writing is mostly spot-on, and even when it inevitably falls to certain romantic-comedy conventions it’s never to a point where it’s dull or unwatchable.

That being said, this isn’t necessarily a laugh-a-minute movie either, and from that standpoint this is not Schumer’s strongest material. Though Schumer is actually very good here, and her great chemistry with Hader is certainly a highlight, don’t expect this to be one of those films where it tries to get you laughing at every opportunity; much of the focus is on Amy and her struggle to change her life for the better, and while it certainly makes for good drama it’s certainly not the funniest movie you’ll see all year. That said, when it does succeed in getting a laugh, it’s completely warranted; it may just have one of the most amusing “talk dirty to me” scenes with John Cena you’ll ever see, an awkward foreplay scene with Ezra Miller’s intern leads to a very questionable conclusion but still has a very funny lead-up, and basketball player LeBron James ends up stealing most of the show when Schumer isn’t on screen as Aaron’s best friend, showing previous basketballers-turned-actors like Shaquille O’Neal and Michael Jordan how it’s done.

What it lacks in the comedic department – and honestly, it wasn’t even lacking that much to begin with – it makes up for in its honesty. Like we said, Schumer is very smart at pointing out the obvious flaws in both sexes through her own truthful analysis, and Trainwreck is no different; both men and women in this film, Schumer included, is treated equally without a hint of being dumbed down for the sake of the audience. This makes them more human and thus more identifiable; arguably more so than in previous Apatow-director fare like Knocked Up or This Is 40, which focused far too much on the privileged lives of white rich people, to a point where it started to become self-indulgent. Trainwreck keeps both Apatow and Schumer’s views of normal human beings in check, and in doing so makes for a rewarding enough view that should mark Schumer as a serious talent to watch.

Although Trainwreck isn’t a laugh-a-minute type film, and suffers from a few trademark problems of director Judd Apatow, it is still strong enough thanks to Amy Schumer’s wise performance and smart writing, which highlights the honest truths about dating from a woman’s perspective and the baggage that comes with it.