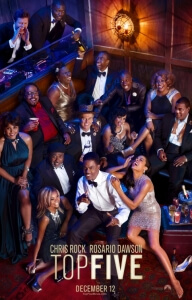 You’d think that this is simply a case of Rock – who also directs and writes the film – giving himself a fictional surrogate that mirrors his real persona, much like Adam Sandler’s George Simmons character in Judd Apatow’s Funny People. However, he goes a few steps too far by giving Andre a knock-out reality show star fiancé (played by Gabrielle Union), a legion of passionate fans who bombard him with autograph requests at every turn, and an audience who laughs at every single one of his jokes in a later climactic scene set in a comedy club.

It’s a bit like giving someone the keys to a costly Ferrari, but instead of trying to dissect its engine to show us the true nature of its internal being they just drive around the town showing it off to everybody with a smug grin on their face. You couldn’t get more self-satisfied if you tried.

However, we will say that of the many vanity projects made by Hollywood’s brightest, Top Five is one of the better ones. This is because it does explore the nature of a life spent in front of a camera, and the consequences of selling out your values and principles for the sake of a famous lifestyle. When we first meet Andre, he is out promoting his latest foray into serious acting with a film about the Haitian revolution, but all anyone can talk about is his famous series of “Hammy the Bear” action films, in which he dresses in a dodgy bear suit with a machine gun shouting over and over again the catchphrase “it’s Hammy time”. Obviously poking fun at the dismal high-concept failures that most famous comedians attach themselves to (take half of Eddie Murphy’s career, for example), Rock explores the idea that no matter what else you may be trying to be remembered for people will always associate you with what’s popular, even when it’s not even good to begin with. Basically, Rock has made his own version of Birdman, albeit with much more of a comedic edge.

Andre’s disdain for the franchise which ironically helped boost his career has left him in a state of cynicism that is only lifted as he spends more time with Rosario Dawson’s Chelsea, a TIME journalist assigned to interview him for his new film that nobody aside from Andre seems to care for. As sparks (naturally) fly between the two, the movie dangerously threatens to tread down the traditional rom-com path with one or two familiar tropes, despite Rock and Dawson’s natural chemistry together. This is the least interesting section of the film, relying a bit too much on clichés to work in a film that’s ironically satirising the typical Hollywood system, but thankfully their pairing is what keeps it afloat long enough to draw breath.

Any fans of Rock’s stand-up will certainly fall head over heels for this movie, which is structured and displayed like his own version of Seinfeld (funnily enough, Jerry Seinfeld is one of many uncredited cameos that show up throughout the film). Most of it here is very amusing, even to those who don’t find his work falling-in-the-aisles funny but still funny regardless, with anecdotes left and right never failing to at the very least bring a smile to one’s face. One particular sequence, a flashback to a trip to Houston with Cedric the Entertainer’s wild and eccentric party animal (and trust us, that’s being kind) involving drugs and two luscious women, feels like it fell right out of a section of Rock’s monologue from one of his live shows.

It’s definitely riotous material, and we definitely wanted to like Top Five more than we did – but overall, despite smart jabs at celebrity culture, the state of popularity over quality, reality TV (Union’s starlet is Kardashian-lite) and other areas of popular media, it just feels too self-satisfied for its own good. It’s definitely not in our own top five, but somewhere in the top twenty-five instead.

Top Five definitely has things to say about the media industry, told with Chris Rock’s trademark raunchiness and un-PC approach, but it’s ultimately let down by an unavoidable feeling of self-indulgence with Rock’s ego ultimately getting in the way of telling a strong story. It certainly has its moments, most of them being amusingly funny at worst, but it’s probably only for fans of Rock’s stand-up to really enjoy.