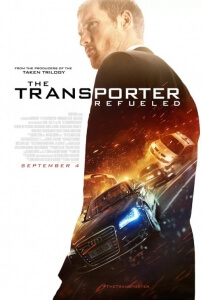 Jason Statham has well and truly earned his stripes as a major presence in Hollywood action by now, and you can thank his true action breakout role in the Transporter series for that. While not necessarily great films, they still worked thanks to Statham’s natural on-screen charisma and endless watch-ability as lead character Frank Martin.

Trying to imagine those movies without that one necessary ingredient is unimaginable and downright stupid… oh, you know where this is going.

The Transporter Refuelled is the first in the series not to feature Statham in the role, and that’s exactly what kills it. Who do they get to fill in his shoes? Ed Skrien, aka Not Daario Naharis from Game of Thrones (he was only in it for a few episodes before he was replaced by Michael Huisman) – and if you saw his stilted acting during the brief time he was on that show, then you’ll know instantly that this recasting movie is a serious fail.

Skrien’s Martin is living along the French Riviera, where he is recruited by a woman named Anna (Loan Chabanol) to act as a getaway driver for a bank robbery for her and a few other women (Gabriella Wright, Tatjana Pajković and Wenxia Yu), using his kidnapped father (Ray Stevenson) as leverage against him should he not comply. As the surprisingly complicated story unfolds, it turns out that Anna and her associates are former prostitutes who are looking to take down a Russian gangster (Radivoje Bukvić) who has wronged them in the past, and all that nonsense that passes the time until something crashes or blows up.

Before we get to the film’s biggest problem, and you can probably guess what that is already, let’s go into other things that don’t exactly make this film work. For one, director Camille Delamarre (Brick Mansions) gives the film neither emotional weight to make us care about anyone nor coherency in his action scenes; half of what’s going on is made impossible to fathom thanks to the rapid-fire editing and shaking camera that gives you the kind of headache that bad action movies give you. Luc Besson, a returning writer and producer from the previous three films, helps craft a script that is full of nonsensical plot twists, even for a Transporter movie, and overdone clichés (family member is kidnapped, everyone with a foreign accent is an evil gangster of some kind, and many more), with little to no effort being thrown in to include something different from what we’ve seen millions of times before. There is also a certain degree of sexism when the film has its initially strong female characters being reduced to mere sex objects with shots of their lingerie and certain body parts, playing like a misogynist Mad Mad: Fury Road.

So, even without the absolute worst quality about the film, which we’re happily about to discuss in detail, The Transporter Refuelled is still a bad action movie – not quite to the depths of A Good Day to Die Hard, but as close as it can get. However, it really is the casting choice in its lead role that seriously drags it down even further, just gently touching the levels of that much-hated sequel.

Skrien not only displays absolutely none of the charisma, humour or even emotion that Statham could bring to the role with his hands tied behind his back, but he’s a complete brick wall regardless with zero likability, zero charm and absolutely zero chemistry with any of the actors he’s appearing against, even Stevenson as his own father. Whenever he’s in an action scene, he doesn’t even fight that well, and to say the martial arts skills of Statham are sorely missed is a massive understatement. He brings absolutely no credibility to the role, and could have been replaced by anybody else within the rest of the story; Stevenson is a more credible action hero than Skrien is, as is Bukvić and he’s supposed to be the bad guy. It’s beyond the fact that Skrien is an extremely poor choice to replace someone like Jason Statham; he’s just a bad actor, plain and simple.

If The Transporter Refuelled serves any purpose, it should be to spread the message that if your action franchise relies heavily on the charm and charisma of your lead, don’t make a new entry without them – otherwise, you get bloody Not Daario Naharis as your lead.

The Transporter Refuelled is already a bad action movie with incoherent direction and lazy writing, but Ed Skrien is such a poor choice to replace Jason Statham that it brings the film even further down with it.