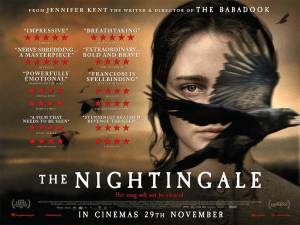 BASICALLY…: When she is brutally assaulted by British soldiers, a young Irish convict (Franciosi) sets out across the Australian wilderness to exact her revenge…

When I first reviewed Jennifer Kent’s bleak and grim revenge thriller The Nightingale earlier this year, there didn’t seem to be a release pattern entirely in place. In the end, it scored a rather small theatrical distribution, both here in the UK and over in the US, which on the one hand seems about right with this kind of movie, but on the other hand it means not a lot of people are probably going to end up seeing it.

It’s not like a film that contains many on-screen atrocities such as rape, discrimination, and cold-blooded murder was ever going to secure a nationwide release, but the fact that not a lot of people are going to get a chance to see the film – which is very good, by the way, especially on a second viewing – is about as upsetting as some of the film’s disturbing content.

Said content, if you need a refresher, revolves around a young Irish convict named Claire (Aisling Franciosi), who lives in 1800s Tasmania with her husband and infant child. Unfortunately, Claire is considered by the monstrous British Army Lieutenant Hawkins (Sam Claflin) to be his property, since he freed her from prison and placed her under his watch, and tensions soon escalate to a horrific tragedy that find Claire without either a husband or a baby. Enraged, she sets out to find Hawkins – who has set off with his men up North to secure a Captain’s position – and exact brutal justice, but to get through the Tasmanian “bush” she must rely on young Aboriginal tracker Billy (Baykali Ganambarr, who incredibly had never acted prior to this – he is so good in this film you really can’t tell), who has his own quarrels with the British.

I mentioned in my previous review for this film – which, incidentally, you can read by clicking right here – that one of the overarching themes of the movie is anger, and how it drives nearly every character in this movie, from Claire’s burning desire for vengeance, to Hawkins’ entitled and bullish demeanour, to Billy’s disdain for the white invaders that took his land and butchered his people, to their breaking point, mentally and physically. On a rewatch, another theme I picked up on which I somehow missed the first time was that of the nature of revenge itself; specifically, what happens when all that anger starts to flow away, and rationality sinks back in. Until she makes her first brutal attack on Hawkins and his men, Claire is an unstoppable force of nature, permanently pissed off with her circumstances and determined to make them pay for what they have done. She is also, like so many white persons in this time and place, frightfully racist, treating poor Billy with nothing but disdain simply because he is of a darker skin, and all of the anger she is keeping bottled up for her wrongdoers can’t help but seep out towards his unfortunate direction. After she makes her first strike, however, humanity finally finds its way back to her, and soon her taste for revenge begins to evaporate, snapping her out of a rage-induced trance and back into the real world where, when you kill someone, it does not leave you with a good feeling. Kent works in this transition to chilling effect, and through the combination of tightly focused filmmaking and a truly fierce lead performance by Aisling Franciosi, you feel the toll that the heavy duty of revenge is taking on this character.

On the flip side, you have a character like Hawkins who is in every way shape and form a truly despicable person, yet humanity finds itself creeping into his black soul on occasions. It’s not enough to completely turn him around like it does to Claire, but the fact that there could well be a decent person in there makes him all the more detestable, because he clearly can do the right thing but frequently chooses not to. Every act of villainy he commits in this movie is filled with just as much ferocity as the film’s protagonist, from his mistreatment of Claire (he has his way with her at least twice in the first act) to treating his own men with utter contempt (among them Damon Herriman, who has also appeared this year in Once Upon A Time In Hollywood and Judy & Punch, and out of all three appearances the most likeable character he’s portrayed is Charles Manson – let THAT sink in), and Claflin does such a great job at making this guy so loathsome yet so raw and troubled that his own fierce emotions make him a movie villain you not only hate but genuinely fear.

Seeing this film a second time really does make me appreciate it a lot more from a thematic standpoint, because while I was always impressed with the film for its unapologetic brutality which made it more disturbing than even Kent’s previous film The Babadook, this time I was able to find more things to say about it and be somewhat taken aback by. With only two films under her belt, Kent has really proven herself to be an incredible filmmaker, one who can shock with some incredibly unnerving imagery but also leave you thinking about the deeper themes hiding beneath all of the savagery. It most certainly won’t be to everyone’s tastes – though to be fair, when have things like rape and murder ever been culturally accepted by anyone who isn’t a psychopath? – but if you can stomach the brutality and raw emotional trauma that this movie frequently throws at you without holding back, then you’ll be fortunate enough to be witness to a very strong drama that won’t be easy viewing, but is quite essential for any appreciator of hardcore filmmaking.

The Nightingale is a brutal but essential piece of filmmaking which further establishes filmmaker Jennifer Kent as a truly indominable storyteller, one that won’t be easy to watch for some but will certainly reward anyone brave enough to stomach its many on-screen atrocities with rich themes, complex characters, and stunning performances from rising stars Aisling Franciosi and Baykali Ganambarr, as well as a truly despicable villain brought to life by a fearful Sam Claflin.

Want to decide what the movie’s like for yourself?
Check out The Nightingale showtimes in London
via