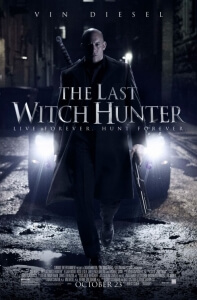 Now that the action stars of old like Schwarzenegger, Stallone, Lundgren et al are far from the box office draws that they used to be, it’s up to the newer stars of today to finish what their predecessors started. One of them, Vin Diesel, has had his fair share of successes and failures – guess which out of xXx and the Fast & Furious series is which – but is more and more presenting himself as a lunkier and balder amalgamation of those 80s action heroes. Hell, this is a guy who can provide the voice of both a giant metal robot and a tree, and he’d still be friggin’ badass.

What is basically a retelling of Blade but with witches replacing the vampires, Diesel is the immortal hunter of witches Kaulder, who has partnered with a sect of priests led by Michael Caine’s “Dolan the 37th” (as far as we know, it’s a fictional religious term that doesn’t really mean anything other than it sounds grand) to hunt down any magical type who threatens to broker the apparent peace between them and humans. When Caine is suddenly shuffled off his mortal coil under mysterious circumstances, and replaced by a much younger priest who looks an awful lot like Elijah Wood, Kaulder sets out to bring justice while also preventing the resurrection of an entity known as the Witch Queen (Julie Engelbrecht), who cursed our hero with immortality in the first place. Oh, and Kaulder also bags himself a handy damsel confidant in the form of good witch (good luck getting The Wizard of Oz out of your head now!) Chloe (Rose Leslie), a “Dreamwalker” which should be self-explanatory.

As you can tell, it’s all rather silly stuff, even for a Vin Diesel movie – but the key difference that makes this one fail where others manage to succeed in the past is, it doesn’t KNOW it’s supposed to be silly. Any sense of real enjoyment is drowned out by a tendency to take itself far too seriously, a trait that was present in the first four Fast & Furious movies. Going back to those briefly, the reason so many people rate numbers 5, 6 and 7 so highly is because they actually understood what they were there to do after four attempts that underwhelmed or were just forgettable, and delivered exactly what it was meant to with endlessly entertaining results. The Last Witch Hunter falls back to those earlier days in the franchise where it was silly, but nowhere near as enjoyable; it’s replaced by a drab, unfocused sequence of events that can’t seem to find the fun in what it’s meant to do.

It’s far from incompetent, as director Breck Eisner does deliver some interesting visuals on occasions, but the script is laden with such underwhelming material, with one particular final twist feeling as if it was plucked straight out of the writers’ rear ends at the last minute, that consistently struggles to find its own footing. It’s clear that the set-up is a mixture of Blade and Indiana Jones with witchcraft thrown in for good measure, but Diesel’s Kaulder somehow lacks the charisma and personality of both and ends up being a dull imitation of the two; you would much rather be interested in someone like Leslie’s character, but though she’s obviously meant to be Marion Ravenwood to Diesel’s Indy she comes across a bit more as Willie Scott, in that she’s a mostly useless character who spends half her screen-time being caught by the bad guys or being irritatingly stupid. As ever, it’s not the actors’ fault, rather the material they are given; they just happen to be characters who can’t seem to sucker us in to the “drama” that is unfolding around them.

On a side note, it will be interesting to see what womens’ rights activists make of a film like this, where all female characters are considered witches and severely lacking in comparison to handsome, muscular men like its white male lead. We suspect a right badgering all around, especially in the wake of pro-women action films like Mad Max: Fury Road and Mission Impossible – Rogue Nation that prove once and for all that women can be just as competent as men. Get with the times, Hollywood (okay, mini-feminist rant over).

There are definitely moments where the film certainly tries to establish connections with its characters, but they are ultimately sidestepped by an overall dull tone with an excessive amount of CGI that, while far from the worst, is still very distracting in how fake it can all look. Think of this film as Vin Diesel’s version of Van Helsing, although the bombastic nature of that particular CG overload isn’t as present here as it was there. After all, that’s how many people, us included, will probably remember this otherwise forgettable attempt to start a franchise.

If you still desire to check out a Vin Diesel film this year that gives you enough enjoyment to make it a satisfying experience, then we highly recommend giving Fast & Furious 7 a watch; we guarantee you’ll have a much better time.

The Last Witch Hunter is nowhere near bad enough to be amongst the worst of the year, but its dull tone and joyless ability to take everything so seriously doesn’t make it worth watching either, with Vin Diesel and co being stranded by a convoluted script with questionable views on women, and an excess in dodgy CGI. If audience reaction is the same, then this forgettable mess really WILL be the last…