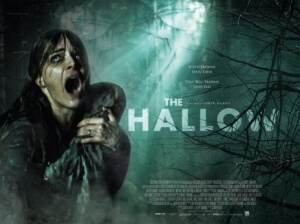 BASICALLY…: A British conservationist (Mawle) situated in Ireland with his family encounters a host of demonic creatures living in the nearby forest…

Although horror is certainly starting to get a lot better in recent months (The Babadook, It Follows and The Gift being prime examples), there are still a lot of really bad ones that continue to detriment the genre to this day (The Gallows, Sinister 2 and Scouts Guide to the Zombie Apocalypse, to name a few).

The Hallow, the feature debut of writer-director Corin Hardy, falls swiftly into the middle category; neither good enough to really be considered a new genre classic, nor is it near as awful as some of the worst horror films we’ve seen this year.

Hardy – the latest filmmaker attached to the forthcoming ever-troubled reboot of The Crow – sets up a simple enough story of British conservationist Adam (Joseph Mawle) who, along with his wife Clare (Bojana Novakovic) and infant son Finn (the Human – damn you, Adventure Time!), moves to a remote residence within a sacred forest in Ireland. Pleas not to disturb the forest made by their aggressive neighbour Colm (Michael McElhatton) are ignored, and it’s not long before the family is disturbed by an army of sinister creatures that inhabit the woodland and are not very happy about their new tenants.

It’s all part of Hardy’s master plan to merge a relationship drama with elements of a dark fairy-tale, as well as hints of the classic body horror that previously worked for The Fly and other such examples. All three work fine individually, though nothing really outstanding, but when these elements are pushed together it can make for a slightly unbalanced viewing. The fairy-tale angle, for instance, is more interesting than anything concerning the relationship of the main couple because, although Mawle and Novakovic do well and are blessed with characters that are more likable than the standard horror protagonist, they’re not very interesting characters to begin with and you’re left wishing that more thought was put into giving these people real meat to chew off of, so to speak. It doesn’t hurt the film when both relationship drama and dark fairy-tale are playing at the same time, but it’s not a very effective pairing, either.

In terms of actual scares, because it wouldn’t be a horror film without them, they’re surprisingly tame for this type of film. They’re definitely there, albeit mostly in the form of jump-scares with that signature “shuuuun” musical sting that plays whenever they happen, but there are very few that actually leave an impact the way that the best scares manage to do, and in comparison with much better films of this type it struggles to keep up.

That said, there’s still a lot to admire about this film, even if it’s far from perfect. What may surprise some casual viewers is the decidedly fast pace this movie tends to take, and at 97 minutes there’s still a lot to cram in; it’s not long after the family arrives at their destination that the first major set-piece, set in the boot of a car stalled in the woods, as well as our first minor look at the creatures, takes place, whereas other films would at least wait until the halfway point to even hint at what the monster looks like, if at all. It all goes by fairly quickly, and though it does mean that certain characters and plot points are sacrificed to the editing gods as a result (Colm’s son disappears completely after a wordless background appearance near the start), you have to admire Hardy’s desire to get to the point as soon as possible in order to prevent the audience from waiting.

However, the real star of the entire film is the effects work. The creatures themselves are wonderfully realised, a great blend of practical effects and CGI that makes them look more real than the average first-time horror director, with a genuinely creepy design that deserves real recognition in an era where legendary make-up artist Rick Baker has retired from the game. Make-up work is also strong throughout, including the design of a final creature that’s more personal than before that looks like something right out of The Fly or any other significant work by the late Stan Winston, and it’s so relieving to see a low-budget horror film rely more on animatronics and other practical artistry than just computers to create them in half the time.

It’s definitely not as good as some of the better horror films over the past year, but The Hallow is still miles ahead of the competition, which is definitely saying something.

The Hallow is flawed, thanks to a lack of interesting protagonists or truly effective scares, but the refreshingly fast pace and stunning effects work is highly commendable and makes it recommended for fans of decent horror.