The Exorcist (A Special Halloween Review)

The Exorcist (A Special Halloween Review) 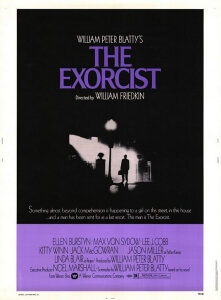 BASICALLY…: 12-year-old Regan MacNeil (Blair) becomes possessed by a demon, with her mother (Burstyn) eventually contacting two priests (Sydow and Miller) to help exorcise it from her daughter’s body…

Halloween is upon us, so what better time is there to take a look at a horror classic, specifically director William Friedkin’s highly influential 1973 film The Exorcist?

Now, using terms like “classic” to describe it may have already given you an indication that we like this movie a lot, and you’d be right; even decades later, it still has the power to shock, innovate and ultimately stir powerful emotions other than fear, as it is more than just a mere horror film like the thousands of soulless imitators it inspired over the years.

But our own take on the film, while probably nothing new, is still interesting enough to discuss in detail and could potentially give you, the reader, a new angle on a film you’ve liked in the past.

The film – for those unfamiliar at all with the material – sees young Regan (Linda Blair), the daughter of actress Chris McNeil (Ellen Burstyn), acting strangely and becoming more and more out of control. After several hospital visits end with no results, Chris is directed to the Catholic Church and the controversial method of exorcism, spearheaded by the elderly Father Merrin (Max von Sydow) and the doubtful Father Karras (Jason Miller), who both attempt to remove the demonic spirit that now inhabits Regan’s body.

Friedkin, who directed this after coming off his Oscar-winning crime drama The French Connection, comfortably switches genres to create an unparalleled horror vision that plays more off the atmosphere and the characters than it does jump-scares and other tired genre tropes. There’s something in the way he stages certain scenes, whether in close-ups of horrified faces or simple yet effective moments of character development, that really makes even the bravest viewer shiver down their spine; no matter what, there’s a sense of evil all around. In fact, watching how Friedkin uses this angle to make the audience more uneasy than normal makes us realise just how influential it really was with many other horror films that came after, precisely the ones that took its time with characters and atmosphere rather than cheap scares (films like Alien, The Shining, The Babadook et al fall into this category), and for that it should more than qualify for essential Halloween viewing.

Performances are great – Burstyn, Miller and especially Blair all excel in Oscar-nominated roles – while the Oscar-winning script by William Peter Blattey, who adapted his own novel of the same name, is ahead of its time (more on that one in a bit). Those elements and many others, from the editing to the stunning practical effects and make-up work by the late Dick Smith, make it a powerful film – not just a horror film, but a FILM – to watch and be awed by to this very day.

Now, our own take is a bit more interesting, if we say so ourselves, but while we’re sure that this theory has already been tried and tested with many scholars and historians we still feel it’s an interesting one that deserves special mention regardless. With that said, we view The Exorcist not just as a film about a girl possessed by a demon and having two priests try to remove it, but also as an intriguing satire of the incompetency of the American health system, especially in the 1970s when it was released. What do we mean by that? Well, consider this [WARNING: MILD SPOILERS]: when Regan first shows signs of possession, she’s almost immediately taken to get a neurological x-ray which, of course, shows no irregularities whatsoever. Several other tests and inconclusive results later – Burstyn’s character mentions a number of eighty-eight doctors that have looked at her daughter – she’s finally recommended the services of an exorcist. To us, that shows the possible intent of the writer and director to broadcast just how the failings of several practised doctors and psychiatrists have led this woman to take further radical measures to ensure her daughter becomes well again, and sure enough it proves to be the most effective step taken. It shows how that, no matter what type of training they are given or were given back then, doctors simply don’t have a cure for everything, and when faced with an extreme challenge such as this their lack of progress is eventually passed on to two people who actually know what they’re doing. For a country that lacks the flawed-but-effective system of the NHS, where patients and family members are expected to pay for life-saving surgery and several other medical bills, America seemed to be filled with medical staff that could not be paid enough to have a simple enough solution to a demon inhabiting the body of a child. American healthcare has certainly improved over the years (though that’s debatable, we’re sure), but back then you have to wonder whether Friedkin or Blattey got severely screwed over by their doctor at some point for them to paint medical staff in a particularly unfavourable light.

But that’s just our wild and crazy theory. More than likely, we’re reading too deeply into something that wasn’t there to begin with, and we’re just using lots of fancy analogies to make us look smarter than we actually are, but if a film as strong as The Exorcist can inspire such radical notions then it’s more than earned its place in cinematic horror history.

The Exorcist is a classic for a reason; great performances, strong direction and a smart screenplay – the latter of which may pose some highly fascinating theories about American health care at the time – make it an essential Halloween classic that has more than earned its legacy by this point.