The Diary of a Teenage Girl (Review)

The Diary of a Teenage Girl (Review) 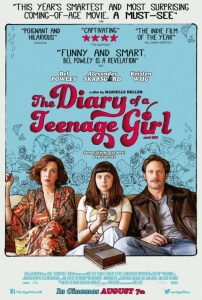 BASICALLY…: Sexually-active teenager Minnie (Powley) engages in an affair with the older Monroe (Skarsgård), who is also the boyfriend of her mother Charlotte (Wiig)…

Many films before and after this one have centred themselves around sex, but not many that we can think of have exclusively been done from the point of view of perhaps one of the most important participants in any physical relationship: the girl, or more specifically the inexperienced girl who is just starting to discover her own sexuality.

In many ways, it’s a shame that The Diary of a Teenage Girl has been slapped with an 18 certificate by the BBFC because, although there are certainly moments of, as they put it, “strong sex” throughout the course of the film, it’s a film that deserves to be seen by a certain young-ish demographic, namely adolescent girls who may be going through similar thought processes and curiosities about human anatomy. If anything, this is a film that will undoubtedly speak to them in ways that many other films before or after probably won’t, because it both embraces the overwhelming desires a teenage girl might have at that age without being so slut-shaming, and also steadily warns us of excess without getting too sappy or sentimental about it.

The teenage girl of the title is Minnie (Bel Powley), a 15-year-old San Francisco native in 1976 who loses her virginity to Monroe (Alexander Skarsgård), an older gentleman who – more worryingly – also happens to be the boyfriend of her mother Charlotte (Kristen Wiig), an alcoholic bohemian that seems to have not broken free of the 60s hippie era. After handing in her V card, Minnie starts to explore and embrace this brave new world of sexuality while keeping a grasp of her love affair with Monroe, and starts to face the trials and tribulations of being a sexually-active young adult.

You would think, judging by the brief plot description, that this is a slightly more contemporary version of Vladimir Nabokov’s Lolita, only with more focus on the young objectified waif instead of the creeping and adulterous older gentleman. However, while it is true that the issue of the character’s age is a little distracting, especially in scenes where she is shown on more than one occasion to be engaging in sexual activity, the film isn’t truly about this taboo relationship (granted, it is a major plot thread). The main objective seems to be showing the branching out of this young woman and her exploring of these avenues that have been made newly available to her, and it does it in a way that feels honest without ever being patronising. It is important for girls to be aware of their sexuality as much as boys, and perhaps even more so, because it helps them understand the significance of being independent and making their own choices, as well as deciding what makes them who they are. This film is the first of its kind that we can think of that truly feels confident in this message and doesn’t feel the need to sugar-coat any of it in its execution, and it’s all the more welcome in today’s pantheon of teen-oriented sex movies whilst even giving those films a serious run for their money.

It is also gifted with three outstanding lead performances, including one that is set to be one of the year’s most significant breakthrough roles. Bel Powley – previously stealing the show as Princess Margaret in A Royal Night Out – is a triumphant knock-out here, clearly unafraid of the edgy subject matter or even to show herself off to the world on several occasions, but from an emotional standpoint she is an actress who anchors this character and her natural curiosity to compelling and highly believable heights. This is her show, no doubt about it, and if she somehow fails to break through into the mainstream after what is technically her film debut (this was shot before A Royal Night Out) then we will be utterly mortified. Meanwhile, Kristen Wiig is equally brilliant as Minnie’s mother, and in keeping with her more recent dramatic work in The Skeleton Twins and her forthcoming appearance in The Martian she displays great promise as being one of the few former SNL cast members to have transcended formidably into a whole different kind of genre as opposed to just comedy. Alexander Skarsgård as well does excellent work here, turning what could have easily been a slimy predator archetype into something a bit more believable, and not even his thick Swedish accent can deter from his sublime performance.

Also worth mentioning is the particular style this film adopts, which some will find irritatingly quirky but many others will feel it adds brevity and beauty to the situation. Minnie is an aspiring illustrator, and over the course of the film she becomes inspired by the works of cartoonist Aline Kominsky and aspires to create her own similar style. As the film progresses, we see her various doodles come to life and tell the story through their abstractly vulgar visuals, in a format not dissimilar to 2003’s American Splendor, and it is an enthralling addition to an already fascinating film. First-time director Marielle Heller – who, like Powley, we’d be shocked if she doesn’t go on to anything after this – incorporates this style into the film so naturally and so fluently that you have to wonder if the whole movie could have been done in this format.

Thankfully, though, The Diary of a Teenage Girl is already so much of a triumph on every level so it’s not worth much thinking about. It’s already a beautiful beast of a movie.

The Diary of a Teenage Girl is a beautifully honest portrayal of teenage sexuality, to a point where it should become recommended viewing for anyone of that demographic, and its three outstanding lead performances – especially the fantastic Bel Powley – should make it essential viewing for anyone else.