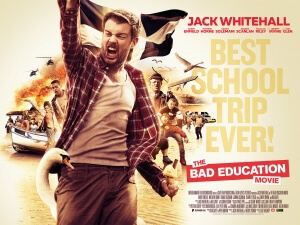 BASICALLY…: Misguided teacher Alfie Wickers (Whitehall) takes his class on one last school trip to Cornwall before they go on to better things after their exams…

When your movie opens with an iconic scene from E.T. being re-enacted by a waxwork model of Anne Frank, that’s a serious sign that you seriously need to reconsider your tastes in humour.

The Bad Education Movie, yet another hit comedy series adaptation trying to replicate the success of The Inbetweeners but instead falling the same depths that Keith Lemon: The Film, The Harry Hill Movie and Mrs Brown’s Boys D’Movie fell previously, this time drags comedian Jack Whitehall down with it, along with a slew of other talented actors and performers. He reprises his role as inept teacher Alfie Wickers, who decides to go the “British comedy characters go on holiday” route and takes his GCSE class of personality-free stereotypes (there’s the fat one! The gay one! The wheelchair one! And so on…) on a trip to Cornwall where, according to this film, everyone has a West Country accent, the towns are dull and lifeless, and the entire Cornish population is eager to emancipate from the United Kingdom. Yup, it’s that kind of movie…

Even though this kind of juvenile silliness is to be expected from a film based on the BBC Three series of the same name, there are times when it becomes so unpleasant that it starts to border on dangerously offensive. The stereotyping, for instance, is off the charts here; having been to Cornwall on several occasions, we can confirm that everything in this movie regarding the Cornish is completely backwards, from the farmer accents (wrong region, guys) to even how they dress. We can imagine that anyone who goes to see this movie in a Cornish cinema will find themselves coming out of it feeling humiliated and insulted; it’s like performing a Minstrel show in Harlem, you’ll just feel unclean as you keep watching it.  Mix in some oddly out-of-place stereotyping of Jews, dressed in Orthodox clothing for some reason, and a van full of French migrants which is extremely bad timing considering recent events in the news, and this movie is a parade of insensitivities that is neither witty not satirical; it’s just ugly.

Say whatever you want about the cringe-worthy humour of The Inbetweeners, especially with how gross it could be at times (anyone remember the water slide from the second movie?), but at least those films were actually funny and had redeeming qualities. The Bad Education Movie was played to a packed auditorium of stony silence at the screening we went to, and keep in mind a good majority of the audience was the target demographic of 12-15 year olds (though how the younger people got in to see this, we’ll never know). Almost no laughter was heard at all, aside from the odd cheap sexual innuendo because, y’know, they’re 12-15 year olds; that should tell you all you need to know about the film, because when the target audience collectively agrees that they deserve better than this, you know that you’ve seriously failed as a movie in general.

Jack Whitehall, who is a genuinely funny stand-up comedian in his own right, is aggressively unfunny here, and is subject to numerous acts of debauchery in the vain hopes of getting belly laughs out of anyone who’s watching; the opening E.T. parody is tasteless enough, but when you watch him swallow an ancient foreskin, teabag a swan before having his testicles bitten by it, and having his trousers pulled down not once but twice at varying heights, it soon becomes a depressing exercise of watching a talented comedian lower the bar to ocean depths.

You also have to wonder how they got quite a starry supporting cast as well, most of them turning up for extended cameos, including Jeremy Irvine as a posh former schoolmate of Alfie’s, and especially Game of Thrones’ Iain Glen as a Cornwall nationalist extremist (the latter in particular dominates throughout the film’s tone-shifting second half), who are all given little to do other than overact like hell or internally wonder how they ended up in this film to begin with. Pity must also be given to Joanna Scanlan, who is given a part that is so ripe for abuse – she’s a battle-axe parent of one of the classmates – that any later moment where we’re supposed to sympathise with her rings completely false; she uses Google Glass technology to record the trip for her own nefarious purposes (since Google announced the discontinuation of the technology earlier this year, this gag is dated before it even began), and is at one point shipped to France in a box whilst passed out so our “heroes” can enjoy a night out. That’s not even harping on her most humiliating scene nearer the start, which involves a class hamster and a tennis ball machine (you do the math on that one…).

We doubt that even fans of the show would find much to enjoy with this film, given the audience reaction at our screening; this is a film that only exists because the Inbetweeners movies did huge business at the UK box office, and though it’s not as dreadful as Keith Lemon: The Film was, The Bad Education Movie still vile in terms of its backwards stereotyping, lowest common denominator humour and its talented cast showing up to be extremely unfunny throughout. Put simply, it’s pretty Bad, alright.

The Bad Education Movie is yet another lifeless cash-in on the success of the Inbetweeners movies, only this one has unfortunate stereotyping, lowest common denominator jokes and unfunny performances by a talented cast. Avoid.