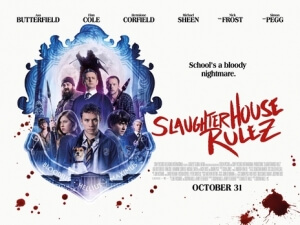 BASICALLY…: A boarding school comes under attack by demonic creatures that have emerged from a nearby sinkhole…

I remember seeing Crispian Mills’ first film as director back in 2012, the Simon Pegg vehicle A Fantastic Fear of Everything, and really not liking it; there was something about it that just put me off, whether it was its pitch-black sense of humour that felt more mean-spirited than actually funny, or the overly-exaggerated style of acting he was making his cast, including Pegg, perform which became rather annoying after a short while.

In a sense, I can see what kind of tone Mills was aiming for with that film – a campy, stylish throwback to British horror-comedies you’d find in the 1970s or 1980s – but it just turned out to be not a very good example of that. His new follow-up film, Slaughterhouse Rulez, suffers from the same problem; again, you can clearly see what he’s trying to do here, but he’s ended up making a film that unintentionally calls back to the lesser films of that era, which were certainly campy and cheesy but rarely funny or even scary, resulting in something that should have been a lot more ambitious than it actually is.

The film takes places at Slaughterhouse, an esteemed and fancy boarding school in the middle of a giant estate in Gloucestershire; the new boy is Don Wallace (Finn Cole), a middle-class Northern teenager who’s reluctant to fit in after his widowed mother kind of springs his new education upon him without much warning. Once there, he and his tormented roommate Willoughby (Asa Butterfield) experience the school’s draconian lifestyle from the ban on electronic devices to the seething bullying by many of the sixth form students – including the psychotic hell-spawn of Draco Malfoy and William Zabka known as Clegg (Tom Rhys-Harries) – all while under the well-meaning but ineffectual eye of housemaster Meredith Houseman (Simon Pegg) and the school’s headmaster (Michael Sheen). However, the real horrors are about to be unleashed, when a nearby fracking site causes sinkholes, waves of flammable methane gas, and a bunch of demonic monsters to come up and devour anything in their path – but not if Don and his uneasy group of new allies can fight back.

Much like his previous film, Mills is clearly going for a certain tone with Slaughterhouse Rulez, that of a campy horror-comedy that’s kind of like a mix between Ghostbusters and the Carry On movies (there’s even an “Ooh, matron!” gag in it at one point). You certainly get a lot of the campiness, especially in how over-the-top some of these performances are – Pegg and Sheen are at the very least having fun with their characters’ overly-proper sensibilities, while Nick Frost also shows up (because it wouldn’t be a Simon Pegg movie without Nick Frost along for the ride) as an anti-fracking protestor fitted with gold teeth to appropriately chew the scenery – but not so much of either the horror or the comedy. As both those things, it tends to falter more often than not; the monsters, while impressively brought to life with practical effects, aren’t especially creepy or terrifying, especially when they’re largely shown in darkness which prevents you from seeing them in full; and the humour largely depends on schoolboy mannerisms, from ogling at an attractive female student’s chest in the middle of an intense action scene, to homophobic remarks directed towards Butterfield’s unsubtly effeminate character. Pegg and Frost also executive produced the film under their new production company Stolen Picture, and in the past they have both been involved in films much funnier and scarier than this one, so they’re not exactly off to a clean start with material that both actors have done, and could easily do, better than.

Strangely, the film sets up a lot of mystery about the history of this school and some of its faculty, most of which is never explored or goes in a completely different, and disappointingly less interesting, direction. At the beginning, there is clearly something immediately off about this school, and it seems to give hints that there’s something more sinister and cult-ish going on behind the scenes, especially when you hear talk about induction ceremonies for the upper sixth which may or may not also include an orgy. There’s also a couple of curious visual cues with some of the paintings, as well as talk of immortality that heavily implies Sheen’s character may not be who he seems. All of that, plus some rather foreboding dialogue, would point towards something that’s outrageously insane and perfectly bonkers for the tone that this movie is aiming towards; unfortunately, most if not all of that is pushed aside by the second half for something that’s pretty much just a generic monster movie. Everything that’s been built up about this school, all of its mystery and suggested history, is completely thrown out the window and almost never returned to again, which is disappointing in how what it appeared to set up earlier would have made for a much more fun and enjoyably insane movie than the one we ended up getting. Instead, this is a baffling anti-fracking movie disguised as a camp horror-comedy, complete with unsubtle demonic imagery and site personnel who cackle and act like Captain Planet villains, which once again I understand the intention behind, but when it’s a serious and controversial issue like fracking, maybe dial the larger-than-life mannerisms down a notch.

Admittedly, I did find Slaughterhouse Rulez a somewhat easier sit than I remember A Fantastic Fear of Everything being, but this film still isn’t getting off lightly. Its intentions are clear as day, but the execution is less so; it’s a muddled, underdeveloped mess that can’t even blend the horror-comedy elements together smoothly, creating an experience that’s almost like sitting in a classroom waiting for something much more exciting to happen, but in this case that something never really arrives.

Slaughterhouse Rulez is a muddled and underdeveloped throwback to campy horror-comedies of old, but while the intentions of director Crispian Mills are clear, both the horror and comedy elements are significantly less so.