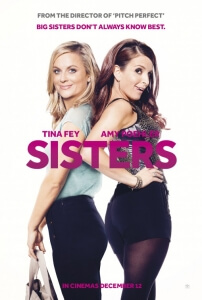 BASICALLY…: Two sisters (Fey and Poehler) return to their childhood home to help their parents move out, and decide to throw one last house party before it’s gone forever…

As far as comedic double acts go, Tina Fey and Amy Poehler are something special. Both SNL alumni have done a great many things together, from co-hosting the show’s Weekend Update segment from 2004 to 2006, to hosting the Golden Globes over the past three consecutive years, to co-starring in films like Baby Mama and now Sisters. They’re both engaging, have great chemistry with each other, and – of course – are funny as hell.

Those elements definitely shine throughout Sisters, which is a better movie than the previews would probably have you believe – although it’s not necessarily their funniest material as comedians.

In the film, Fey and Poehler are, big surprise, sisters who are called back home to Orlando, Florida to clean out their childhood bedroom before their parents (James Brolin and Dianne Wiest) sell it. Not willing to let their memories go so soon, both of them decide to throw a house party with their old friends – both figuratively and literally – which of course gets wildly out of hand before the night is over.

Right now, you’re probably reckoning that this is just a mixture of Project X and Bad Neighbours only with two women in the lead role, when in fact this film is far more likable and entertaining than both of those films combined. Fey and Poehler’s strong chemistry is undeniable, while both are individually fun as well; while Fey gets the showier role as an irresponsible single mother whose teenage daughter (Madison Davenport) is more mature than she is – one of the film’s many age stereotype reversals – Poehler’s quieter turn as the straight (wo)man is strangely more affective, building on her recent strong vocal performance in Inside Out.

Together, they make the film stronger than it needs to be; but they’re ultimately let down by a script by former SNL writer Paula Pell that’s a bit too sporadic to be consistently funny. That’s not to say that it’s terrible writing by any means, but given the talent involved it’s a shame that the humour doesn’t always come at you from all corners from the word “go”. It starts off amusing enough, though nothing laugh-out-loud hilarious, and it ends on a decent note that, once again, doesn’t exactly have you rolling in the aisles. That leaves the middle section, mostly dedicated to said party, and it is by far the best part of the entire film. This is where the humour is far more consistent, more hilarious and more invested than what came before or comes after; you end up having just as much fun watching these wild-but-not-unlikable people party it up as they end up having, from snobby suburban housewife Maya Rudolph attempt to sabotage the party on several occasions, to watching a dorky Bobby Moynihan get extraordinarily high on drugs (even in background shots, he still steals the attention away). Best of all, though, is John Cena’s cameo as an impossibly-muscled and tattooed drug dealer who raises the most belly-laughs without even changing an emotion, he’s that funny.

But that’s a problem in and of itself; John Cena shouldn’t be the funniest thing in a Tina Fey and Amy Poehler movie, it should be Tina Fey and Amy Poehler raising the most laughs. Yes, they work wonderfully off each other, but they’re not entirely funny. Sure, the characters that they’re portraying are likable in their own warped way, but they’re not the funniest thing in the movie. It’s a problem not down to either of them, but down to the script that ultimately doesn’t lend them many opportunities to be the best thing in their own movie. Director Jason Moore, best known for directing the first Pitch Perfect, does well with trying to get as much humour out of it as possible, but even he cannot seem to mine as much as should be able to for the sake of his talented lead actresses.

By no means is Sisters a bad movie, it’s not even mediocre, but what we’re basically saying is that it could have probably been better than it is. It’s a shame because we do feel that Tina Fey and Amy Poehler are a fantastic comedy duo as well as two great performers, but sadly this isn’t their comedic masterpiece; still, it offers a good enough alternative to anyone not wanting to watch the OTHER big movie out next week…

Sisters is a good-enough showcase for comedy duo Tina Fey and Amy Poehler, whose strong chemistry with each other is undeniable, but it’s ultimately let down by a script that’s only sporadically funny, with most of the laughs coming in the party-filled mid-section and from a hilarious cameo by John Cena as the most built drug dealer you’ve ever seen.