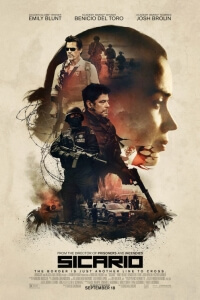 BASICALLY…: FBI agent Kate Macer (Blunt) finds herself in over her head when she is placed within an elite task force on the US-Mexico border, on the hunt for a vicious drug lord…

It was announced that earlier this year that director Denis Villeneuve, the director of the Oscar-nominated films Incendies and Prisoners – and the little-seen Jake Gyllenhaal thriller Enemy – would be directing the long-mooted sequel to Ridley Scott’s influential Blade Runner. Any fan of that film will think it’s an impossible task to successfully follow up that film’s moody, atmospheric and sometimes sinister feel with something just as intense.

However, if Sicario is anything to go by, then the replicants are in more than safe hands.

No Phillip K. Dick robots in this contemporary tale of the War on Drugs, which sees FBI agent Kate (Emily Blunt) being assigned to a secret unit operating on the US-Mexico border, after an opening raid ends rather gruesomely. It isn’t long before Kate feels extremely uncomfortable with the actions undertaken by her DOD mentor Matt (Josh Brolin) and especially his mysterious wingman Alejandro (Benicio Del Toro) to ensure that order is kept, and once the true motives become more obvious the real struggle begins – but not in the way you might think.

As with Prisoners, Villeneuve keeps things at a steady pace that leaves the audience guessing all the way through; but unlike that movie, where the build-up was extremely fascinating and the pay-off still very good but not as strong, it’s the exact opposite here. Everything up to the third act is definitely commendable and deserves a good amount of praise, but when that final act comes into effect it becomes downright chilling, perhaps ending on some of the most powerfully bleak imagery we’ve seen all year. Obviously, nothing will be given away here, but trust us when we say it’s the kind of dark and uncomfortable feeling you get when you watch No Country For Old Men or any other of the Coen brothers’ darker movies.

Villeneuve achieves the impossible with the bleak nature of this film, by making even the most chilling scenes look absolutely breath-taking. Working off a screenplay by first-time scribe Taylor Sheridan (who Sons of Anarchy fans may know as Deputy Chief Hale), the director takes full advantage of the desert landscapes between El Paso, Texas and Juarez, Mexico and turns them into vast nightmarish wastelands (mostly visible from several helicopter shots) where absolutely no-one is safe from the disturbing retaliations of the drug cartel, such as being hung from several bridges with limbs torn off, or – in perhaps the most unsettling visuals of the film, and that’s saying a lot – a line of corpses being asphyxiated and placed behind the walls of a small Arizona house. Thanks to his slow-burner pacing and tension, as well as Roger Deakins’ absolutely fantastic cinematography (seriously, how has he NOT won an Oscar yet?!), it’s an extremely dark movie that just so happens to be made to the highest standards.

That extends, too, to its casting – Blunt is undeniably excellent, and is up there with some of the year’s strongest cases for having more women in leading roles in major films, and Del Toro is the strongest he’s been in years as a mercenary from south of the border, an anti-hero who ends up stealing the film thanks to his strong screen presence and extremely terrifying demeanour (seriously, his final couple of scenes will send shivers down your spine). Brolin isn’t given as much meat to chew on as his co-stars, but he makes the most out of a bit role that’s enough for him to stand out. Look out, also, for Jon Bernthal who shows up for a couple of poignant scenes that will make you sorely miss his Shane from The Walking Dead.

For the most part, Sicario is definitely a good film, with strong direction teaming up with some great performances and stunning cinematography to make an otherwise bleak-as-all-hell film look absolutely wonderful; but it becomes an even better one, certainly a more innovative one, in its third act. We’re remorseful that we can’t go into as much detail, because spoilers, but that feeling of uncertainty which keeps you on the edge of your seat up until the final few frames of film is more than worth the price of admission.

Sicario is a commendably bleak thriller that is well-directed by Denis Villeneuve, well-acted with some career-best performances by Emily Blunt and Benicio Del Toro, and shot spectacularly by cinematographer Roger Deakins; its third act, however, transcends it into even darker and even more fascinating territory.