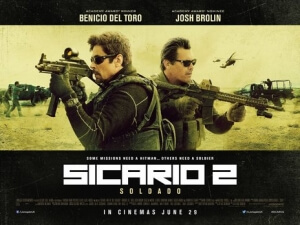 The 2015 thriller Sicario was one of that year’s best films, with masterful direction by Denis Villeneuve, stunning cinematography by Roger Deakins, a killer script by Taylor Sheridan, and three great performances by lead actors Emily Blunt, Benicio del Toro and Josh Brolin.

News of a sequel, which came not that long after the film debuted, was somewhat of a surprise, given how complete the first film felt and how there seemed to be very few loose ends. Cause for concern intensified when it was revealed that Villeneuve, Deakins nor Blunt were returning for the follow-up, with director Stefano Sollima replacing Villeneuve and del Toro and Brolin promoted to joint lead status in Blunt’s place, but with writer Sheridan still on board – and going strong with other hits like Hell or High Water and Wind River under his belt since then – there was still a fraction of hope that, at the very least, this sequel would be a somewhat worthy continuation.

As it turns out, Sicario 2: Soldado is exactly that… up to a point. While it’s nowhere even close to matching the quality of the first film, there is still a strong tension and feeling of suspense that leaves you mostly invested, and there’s just enough of it to carry you through this movie, even during some of its more generic detours.

We open the film as it is revealed that the Mexican drug cartels have begun smuggling terrorists across the US border, a problem that shady taskforce operator Matt Graver (Brolin) is brought in to solve. Along with undercover operative Alejandro (del Toro), he sets plans into motion for Isabela (Isabela Moner), the teenage daughter of a powerful Mexican drug lord, to be kidnapped in an attempt to ignite a war between duelling cartels. However, when things go south as they usually tend to do in these kinds of movies, Alejandro is left stranded in the Mexican desert with a new mission to escort Isabela to the United States while avoiding all the dangers that come with it.

The absence of Villeneuve and Deakins behind the camera is greatly felt here, as although Sollima and cinematographer Dariusz Wolski do just fine in their respective roles, they seriously flounder when you put them next to real masters of their craft, especially when you’ve seen what they can do in this universe. While both of them are decent at matching the tone and visual style of the first film, you are reminded quite a lot of how both the direction and the cinematography was a lot tighter and more sophisticated the first time around, and it doesn’t make this one stand out as much as that one did. It was only in watching the first Sicario again before this one that I picked up on how Villeneuve and Deakins really did elevate some of the material, which was by no means bad but there were one or two moments that did stretch belief every now and then; I can’t exactly say the same about this one, because again while Sheridan’s script isn’t necessarily poor, it’s a lot more generic and less ambitious, which is something that the direction and cinematography reflect to its slight detriment. There’s not much to this movie that really stands out as much as the first one, and it surprisingly has less to say about the escalating shadiness of both the US and Mexico governments, which is especially shocking seeing how this began filming almost immediately after Trump’s election, and you would’ve thought they’d have grabbed that opportunity by the balls, but alas.

Though Sicario 2: Soldado is clearly an inferior sequel to a film that didn’t necessarily need a sequel to begin with, it’s by no means one of the worst of its kind. In fact, compared to a lot of sequels to highly-acclaimed originals that didn’t call for more story to be told, it definitely stands on its own two legs just well enough. Once again, though the tension and suspense isn’t quite as high as last time, it’s still intriguing and fascinating enough to make you want to see where it’s all going, and when you’ve got two great actors like Brolin and del Toro on board to deliver the goods, you know that you’re in safe hands on-screen. While some will undoubtedly argue that their expanded roles here negate their more shadowy and mysterious presences as established in the previous film, their performances are good enough and their characters interesting enough to carry you through, even when the script calls for them to take a more generic route to get to their endpoint. There’s no doubt that the majority of people will think that this is nowhere near to being as good as its predecessor, but neither del Toro nor Brolin are contributors to that fact.

If you go into it expecting a movie that’s on par with the movie it’s following up on, you’ll more than likely come out of it feeling underwhelmed. However, if you’re the more forgiving type, and just want to see a decent but unremarkable action thriller, this is probably your safest bet.

Sicario 2: Soldado comes up heavily short when you compare it to its masterful predecessor, but as a generic action thriller it’s serviceable and decent enough, even though you can always tell that it’s nowhere near as good as the first one.