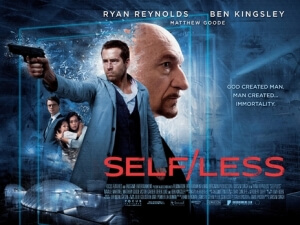 BASICALLY…: Dying billionaire Damien Hale (Kingsley) undergoes a radical procedure to transport his consciousness into a younger body (Reynolds), but finds himself haunted by images of his new body’s past…

Director Tarsem Singh – sometimes known only by his first name, presumably for the “artiste” factor – has managed to make a career out of visually splendid but conceptually flat movies including The Cell, The Fall, Immortals, and Snow White “retelling” Mirror Mirror. Most audiences are split with Tarsem’s work, with some calling them misunderstood art pieces and others calling them pretentious exploitation flicks.

But however split the audience may be on him, they will collectively agree that out of his film career thus far, Self/Less is by far the least interesting in terms of its visual prowess. But does that overall make it a bad movie?

Sure, this film lacks the kind of surrealist imagery that earned Tarsem his popularity/backlash, but to give credit due he’s not a TERRIBLE filmmaker; he can frame a shot well, and can keep the camera still enough when it comes to an action scene so we can actually see what’s going on. The problem is, like with all of his films, he can never quite figure out how to tell his story in the best way possible, and ends up looking a bit muddled as he tries to get us to focus on its technical achievements instead of the more important human elements or even its ideas and concepts.

Take the plot, for instance – we start off with Damien Hale (Ben Kingsley), an arrogant business tycoon who’s slowly dying of cancer, learning of a secret procedure dubbed “shedding” which sees the consciousness transplanted into another younger body, supposedly genetically modified in test tubes. After publically faking his death, Damien undergoes the procedure and dies for real, and finds that he now inhabits a new body (Ryan Reynolds) with which he can live a more active lifestyle, but soon starts to uncover the sinister origins of where it actually came from.

Now see, that’s a premise ripe for intelligent thinking, posing questions of immortality and sacrifice, while exploring a concept which – while certainly not new in the realms of grounded sci-fi – has the potential to truly say something about the human ego and the lengths we are willing to go to live forever. But nope – Tarsem more or less avoids diving into the heavy psychological possibilities in lieu of a weirdly out-of-place action sub-plot and a bunch of intellectual bollocks that will make your head hurt if you think about it for too long.

Once again, Tarsem isn’t a bad filmmaker; it’s just his grasp of storytelling that’s inconsistent. He’s been handed the task of taking the script by David and Alex Pastor and turning it into something that can work in a visual medium, but the dialogue is so long-winded and dripping with exposition dumps that the task is all the more difficult, and one that not even Tarsem can probably handle delicately. It’s hard to really care about anything or anyone because the film doesn’t take the time to settle things down and help us understand what’s going on and who it’s happening to, other than the most basic of traits; we can tell right away, for instance, that Damien is the kind of rich douchebag that you see in Yuletide Charles Dickens stories, not the least because he’s wealthy yet considerably alone – save for Victor Garber’s business partner Martin – and has an estranged daughter in the form of Michelle Dockery’s Claire. There’s nothing really subtle or really interesting about him, and even when he gets his Reynolds-shaped body with that “new body smell” (as he puts it) he’s still just a dull lead character.

The actors are definitely trying to make their material work, and to be fair some of them are actually quite good. Reynolds is fine despite the bland character, while Garber does have some good moments when the film allows him to do so. Others, however, can’t help but feel a little wasted – Matthew Goode, as the villainous Professor Albright (well, he’s British, and by this movie’s logic that means he’s the villain), is okay but only seems to have the job of delivering long speeches in his ever-so-posh accent; Dockery only appears in two scenes that bookend the film; but worst of all, Kingsley – despite sharing top billing with Reynolds – is only on screen for the first 10-15 minutes before he undergoes the procedure that turns him into his co-lead, and even then he’s saddled with a ridiculous New York accent and a disinterested approach to his characterisation.

Really, though, it all comes down to the fact that it’s just not a tightly wound script that happens to have been executed by a director without a clear vision. Tarsem definitely knows what he wants to get across, but as before he just can’t say it in the right way and hopes that other aspects like the action scenes (which, though competently made, are still pretty lame and not keeping in tone with the film’s more philosophical backdrop) and disorientated editing can distract its viewers from seeing through the seams. But alas, the power of surreal imagery that has helped him in the past isn’t around to save him this time.

We certainly don’t think Self/Less is even Tarsem’s worst film – out of the ones we’ve seen, we remember Mirror Mirror being harder to sit though (and that’s not even touching upon Julia Roberts’ presence in that one) – but it is certainly not one of his strongest. It’s all just a little Self/Indulgent, if anything.

Self/Less is competently shot and decently acted, but director Tarsem Singh wastes the potential of the script’s ideas with lame action and an overall dull tone.