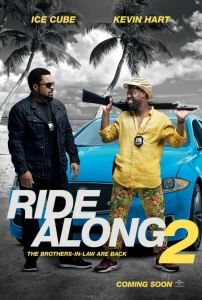 BASICALLY…: Now a fully-fledged cop, Ben (Hart) teams up with future brother-in-law James (Cube) on a dangerous mission to Miami…

Dirty Grandpa is the best friend that Ride Along 2 could ever have – having seen that abomination shortly before seeing this film, we can safely say that although Ride Along 2 is by no means a good movie, it is a far more tolerable kind of bad movie to sit through, whereas with Dirty Grandpa we were seriously struggling to stay in our seat.

At least Ride Along 2 is just “meh” enough to tolerate it all the way through.

It’s a surprise in and of itself, especially since it’s a sequel to a film we really didn’t like – it made our 2014 End of Year Worst list, tied with another poorly-timed post-Ferguson cop comedy Let’s Be Cops – and, quite honestly, forgot even existed not long after we saw it. But the sleeper box-office success of the first ensured that Ice Cube and Kevin Hart would team up again, and despite nearly nobody demanding to see that happen Ride Along 2 has wound up being another financial hit, which probably means that in the next couple of years Ride Along 3 will be rounding up this questionable trilogy – but more in the vein of The Hangover than, say, Lord of the Rings.

Again, our memory of the first one is pretty hazy, so when people say it’s nothing more than a carbon copy of the first film, just in a different setting, then we have no choice but to take their word for it. Plot sees Ben Barber (Hart), now fulfilling his duties as a new Atlanta cop, accompanying his future brother-in-law James Payton (Cube) on a case that leads them to Miami, where a criminal mastermind (Benjamin Bratt) is doing… criminal stuff (something about a murder, but it’s really not worth caring about), and only the two mismatched cops – one cool, bad-ass and no-nonsense, and the other is Kevin Hart – can bring him down. Again, we can’t really comment on how they pulled a Hangover Part 2 and just did the same film again but somewhere different, because the first film was so forgettable that we can’t even remember what happened in it. But from what we can remember to piece it to this film, it sounds pretty stupid anyway.

Like the first film, again from what we remember, it’s just a completely standard buddy cop action-comedy that doesn’t really offer anything ground-breaking or memorable; a lot of it, from the characters to the action to especially the plot, is recycled from numerous things we’ve seen time and time again, and they’re playing it straight here so it’s not even a 22 Jump Street style riffing on the inflated Hollywood sequel that would have made it a more enjoyable experience. So, for the most part, it’s kind of a bore to watch if you’re way too familiar with these tropes.

The one thing that actually does carry the film, and we actually remember it being the case for the first film too, is the pairing of Ice Cube and Kevin Hart. Both of them have great chemistry and are actually a fairly watchable on-screen duo, going back and forth with each other with quips and jarring personality traits; in fact, they share a way more believable (pseudo) romantic chemistry with each other than they do their respective love interests, like fellow Ride Along veteran Niki Sumpter who this time is just stuck at home contributing next to nothing, and Olivia Munn who is admittedly a stunning presence (and has proven to act in the past) but also seems to have a creepily robotic set of limited acting skills here. Even Ken Jeong, as a ladies-man hacker, is pretty tolerable here, thankfully never descending into his standard Mr. Chow routine here.

Laughs are scarce for the most part here, but every once in a while Cube and Hart’s interactions will raise a smile and maybe even a chuckle, as does a brief interrogation by Hart involving sensual ringtones. Aside from that, things are played pretty straight and the endless amounts of copying from much better action-comedies of its kind makes it a little more boring to sit through, leading to the ultimate conclusion that Ride Along 2 is yet another pointless sequel that everyone will end up forgetting not long after they saw it.

But hey, at least it wasn’t Dirty Grandpa.

Ride Along 2 exists only because the first film was a hit, as there’s nothing note-worthy about this standard buddy cop action-comedy that hits on all the familiar notes we’ve seen over and over again, aside from the admittedly affective chemistry between Ice Cube and Kevin Hart.