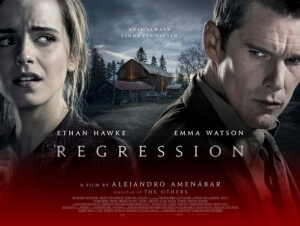 BASICALLY…: A police detective (Hawke) investigates the rape of a young woman (Watson), who might have been the victim of a satanic cult…

For his first horror-thriller film since the acclaimed The Others, director Alejandro Amenábar has decided to fixate on the minor 90s paranoia of satanic cults practising their disturbing rituals in secret amongst several communities.

Unfortunately, the resulting film Regression fails to do anything neither interesting nor imaginative with that basic set-up, and it soon becomes a dull exercise in watching almost nothing unfold for over 100 minutes.

Supposedly based on true events, the film follows police detective Ethan Hawke (we know that this character has an actual name, but are you really going to call him anything else?) as he investigates an odd case of a man (David Dencik) walking in to the police station and admits to sexually abusing his teenage daughter Emma Watson (again, no real reason to refer to her as anyone else), but not remembering the event himself. Hawke, with a hypnotherapist (David Thewlis), attempt regression therapy in order to extract the memories, but before it can turn into Inception Hawke suddenly finds himself facing the possibilities of a satanic cult wanting to wipe him out.

The biggest problem with the film is that it flip-flops so often between genres, and it never feels comfortable in either one of them. For the most part, it’s a straightforward psychological police thriller, as Hawke starts to unravel during his further investigation; but suddenly, it can threaten to become a supernatural horror, with about as much intense imagery and hints of gore that one can expect from that kind of flick. The former never really gets going, and though there are certain moments of intrigue they’re quickly washed away by an overwhelming feeling of been-there-done-that; meanwhile, the latter seems wildly out of place by what came before it – even in a film about the investigation of satanic cults – and while some of the imagery can be chilling at times, even though it’s filled with powder-covered faces that make them look like they’re auditioning for The Exorcist or The Seventh Seal, it just isn’t able to fit with what came before.

Despite the decent turns by actors like Watson and Hawke who are clearly trying, particularly Watson in an against-type role, their characters warrant no connection or engagement with the audience. Most of them are sticks in the mud, unwilling to cooperate with other people because of their own ego-driven desires, and mostly refrain from gaining sympathy due to moments of questionable acts that threaten to define a person right there and then. To reiterate, it is not a reflection on the actors themselves, because they are definitely trying to make something out of this material, but sadly what they’re given doesn’t give them much room to do much.

But mostly, it’s just overwhelmingly dull; not a great deal happens throughout this investigation that is worthy of interest, and not even the “twist” ending is really all that shocking, probably because it’s one of those carpet-pullers that you can see coming a mile off. The whole thing is a slog to get through, although not as much as some of the far worse slogs we’ve witnessed this year, and it sadly leads to Regression being one of those films that will simply come and go, leaving almost no impact whatsoever.

You could almost say that it’s a suppressed memory already…

Regression has admirable turns from its actors, but even they can’t escape the sluggish nature of the script and direction which leads to it being a dull and unsure film that doesn’t really know what it wants to be.