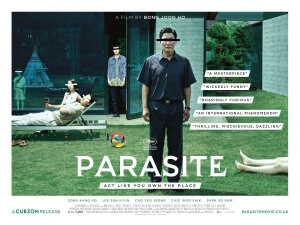 BASICALLY…: The impoverished Kim family con their way into the lives of the wealthy Park family, giving them a taste of their luxurious existence…

By the time you’re reading this, you’re probably already aware of why we’re taking another look at Bong Joon-ho’s Parasite – in case you somehow aren’t, this is being written within hours of its historic success at the Academy Awards, where it took home four statuettes for Best International Feature Film, Best Original Screenplay, Best Director and Best Picture, becoming the first ever foreign language film in the Academy’s 92-year history to win the top prize – but as it turns out, the reason I want to do another review for this movie is to express how my initial opinions may have changed.

When I first saw the film at an early screening in December, I rated the film highly but didn’t quite have the same amount of praise that every other critic in the land gave it (you can read exactly what I wrote here). Since then, I have seen it two more times, and each time I was struck by how there were just newer and newer things I kept discovering that I didn’t spot or even consider spotting on the first go. In fact, some of these newer discoveries helped clean up some of the flaws I had with it during that first viewing, making certain character motivations and plot developments make a little more sense or at least be made a lot clearer.

So, I can finally be on the same wavelength as pretty much every critic ever and say that Parasite is, indeed, a truly magnificent movie; it just took me a couple more viewings to catch up.

As a brief reminder of the plot, it follows the Kim family who live in a dingy underground apartment and are seriously struggling to make ends meet. It’s not until a friend of Kim Ki-woo (Choi Woo-shik) suggests he act as the private tutor to the eldest daughter of the Park family, a much wealthier clan that resides in an extremely swanky home, that they see an opportunity arise; using their cunning and quick wit, they slowly integrate themselves into different positions within the household, with daughter Kim Ki-jeong (Park So-dam) posing as an art therapist for the Parks’ younger son, father Kim Ki-taek (Song Kang-ho) filling in as their new driver, and mother Kim Chung-sook (Jang Hye-jin) replacing the current housekeeper. The Kims’ enjoyment of their new access to luxury is short-lived, however, when unnerving secrets are revealed that throw everything into disarray.

As with my previous review, I do not wish to elaborate further on plot details because it really is best experienced with as fresh eyes as possible. In fact, seeing a trailer for this probably isn’t the best idea, as much as it tries to hide some of the film’s biggest twists, because the less you see of it beforehand the more you will most likely get out of it upon actually seeing it. But twists and turns aside, the movie is in absolutely pristine condition; everything from the cinematography to the production design to the editing looks and feels spotless, handsomely packaged by a filmmaker who knows just how much he needs to feed the audience without overdoing it or starving them. Bong Joon-ho conducts his scenes like an orchestra, lending them a smooth pace that ensures it doesn’t outstay its welcome, all while guiding everything to an inevitable conclusion where the themes, character arcs, previous foreshadowing and dramatic irony all come into play. It’s masterful filmmaking, instantly positioning him up there with many of the auteurs that he has publicly stated were his inspirations, and really feels like the kind of movie that would have been made during the New Hollywood era of the late 60s to early 80s, except this is as far removed from Hollywood as you can imagine, in terms of both geography and mentality.

Repeat viewings are most certainly beneficial to the casual viewer, since there are minor details sprinkled throughout which make later events seem all the more natural. You see early on the manipulative and smooth-talking nature that this family clearly has down to a tee, when they are trying to talk their way out of trouble with a pizza box folding scenario; pay attention to how the scene is shot, framed, blocked and written, and there you have a rather brilliant example of visual storytelling to showcase the silver-tongued talents that will come in handy during the main plot. There are other little details (many of which might be a little too spoiler-heavy to get into) that a less watchful filmmaker would have just let slip by unnoticed, but again Bong Joon-ho is so great at what he does that he brings them to the viewer’s attention without even making it seem so apparent, and even if you don’t spot them on the first go they are always there to be uncovered should you decide to go back again and again to study it.

In a way, I feel bad that it’s taken me this long to truly appreciate the movie for the cinematic brilliance that it is, and now I am more glad that I’ve been able to experience it when I had because movies like Parasite just do not come around every so often. Beyond the fact that it’s taken Hollywood by storm, as this year’s Oscars have just proven, it’s extremely encouraging that it’s being talked about in such a positive light, ensuring that it will continue to have a highly deserved audience for many years to come.

Parasite is a masterful exercise in filmmaking that does take at least one additional viewing to fully appreciate, but rewards all viewers with an insightful story told brilliantly by Bong Joon-ho and little details that make it all the more rewarding should you decide to go back again and again to analyse, which really is the best way to experience it.