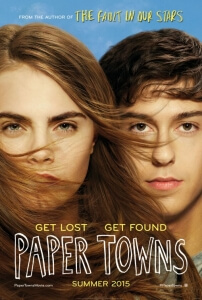 BASICALLY…: After his childhood friend Margo (Delevingne) suddenly disappears after an all-night road trip of revenge pranks, Quentin (Wolff) resolves to find her…

It’s understandable why the works of author John Green irks people in the wrong way – the novelist and part-time YouTuber (he forms one half of the VlogBrothers) has a certain style that exhibits its quirkiness and wit towards the pseudo-intellectual teenagers of the iPhone generation, but still manages to charm with its warm-heartedness and likable if contrived characterisations. Despite the mixed feelings towards him as a writer (we feel it’s decent enough), last year’s film adaptation of his latest book The Fault in Our Stars was a huge hit with both critics and audiences, and was enough to fast-track the rest of Green’s bibliography to the big screen.

The first in these fast-tracks, based on his fourth book Paper Towns (which this film shares the title of), offers more of the same kind of tone and style that his harshest critics cannot stand, and while this one isn’t nearly as effective as The Fault in Our Stars it’s still a fairly passable teen flick in its own regard.

Teenager Quentin, or “Q” (Nat Wolff), is a lowly teenager with a crush on his neighbour Margo Roth Spiegelman (Cara Delvingne), a childhood friend from whom he has since grown apart from. One night, Margo enlists Q’s help with a series of revenge pranks that involve nude photographs, catfish, cling film and eyebrow remover; but when she doesn’t show up for school the next day and she is reported missing, Q embarks on a quest with his friends to solve the mystery of her whereabouts, and possibly win her heart in the process.

What makes this movie stand out from some of the more recent teen flicks is its focus on the relationships between the characters, most notably between Q and his friends Ben (Austin Abrams) and Radar (Justice Smith). You definitely feel that these three are friends, which is helped by the actors’ strong chemistry and rapid-fire back-and-forth banter that makes them a likable trio that never gets on your nerves. Even later in the film, when they are joined by two outside members on their quest to find Margo – Radar’s girlfriend Angela (Jaz Sinclair) and Margo’s best friend Lacey (Halston Sage) – they both feel like natural members of the group even though they should be out of place, and once again it’s down to the actors’ natural charisma and chemistry that makes them endlessly engaging to watch.

That said, Paper Towns doesn’t take as many risks as The Fault in Our Stars did, and it’s an inferior product by comparison. If you couldn’t stand the quirkiness or big-headed philosophy of that movie, then you may want to avoid this one because it’s filled with enough obscure references to Walt Whitman and Woody Guthrie to make it seem deeper and more intellectual than it really is, and it wouldn’t honestly surprise us if people call it overly-pretentious (though we don’t necessarily harbour those same feelings).

What is certain to be the film’s biggest divisive point, however, is the girl at the centre of the film. Margo Roth Spiegelman is, by every definition, a terrible person; she is self-absorbed, wants nothing but attention by spouting much of the pseudo-intellectual bollocks and obscure quotes, constantly runs away from home (to a point where her parents seem more frustrated than outright worried) and cares not for anyone else that isn’t in some way connected to her. Yet, the film doesn’t exactly call out on her warped sensibilities, but it doesn’t completely ignore them either; she’s not the kind of person that one would create a mystery around, and the film still makes us feel satisfied by the eventual conclusion. Some will see this character as a misunderstood girl wanting to escape and make something of herself, while others will just see her as a pretentious little snot; we can understand both. There is nothing wrong with Delevingne’s performance – she’s lively and engaged, a fine breakout performer – but the person she’s playing is a highly questionable trophy that you’re not even sure you want to win.

Problems aside, and there certainly are a few, Paper Towns is one of the more charming teen flicks of recent memory, based primarily off of the good chemistry between its cast of young and talented actors. Not so much paper, but it is definitely a little flimsy.

Paper Towns is problematic, especially with its pseudo-intellectual tone and the divisive character of Margo Roth Spiegelman, but the natural charisma and chemistry between its young actors is strong enough to make it good viewing, but not if you aren’t into John Green’s particular style in the first place.