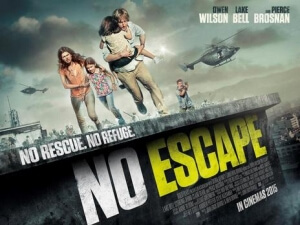 BASICALLY…: An American family gets caught in the middle of a violent uprising in Southeast Asia, and must avoid any blood-thirsty rebels in order to survive…

According to the movies, if you’re a white family from the US or the UK and you’re heading over to any part of Asia for either a holiday or to live there, Asia will in some way strike back against you.

No Escape is probably the most violent representation of this Hollywood assumption to date, and also the most intense and needlessly brutal – but it’s also far from the best.

The family in question is led by father Jack (Owen Wilson) who, along with his wife Annie (Lake Bell) and their two young girls, are relocating to an non-descript part of Asia (all we know is that it’s one of the three counties that directly borders with Vietnam, otherwise it’s simply referred to as “Asia”) where Jack is assigned by his company to work. Not long after they arrive, in the wake of a brutal assassination of the Prime Minister, rebels are rallying in the streets and executing American citizens for reasons that are frankly a little too childish to explain here. From there, Jack and his family must remain one step ahead of the rebels and look for a way to escape their ordeal. However, as the title suggests, it’s not going to be easy.

The intention of the movie, directed by Devil’s Jon Erik Dowdle, seems for it to be this kind of B-movie action-thriller where the objective is to avoid being caught or killed by the enemy – however, the problem is that it’s not necessarily a good one. Dowdle, who also co-wrote the script with brother Drew Dowdle, doesn’t give the film any kind of depth or meaning that makes it worth watching, and places in its stead a stale and dry survival story like countless others before it: this one just happens to be set in Asia. There are certain moments of earned suspension, but Dowdle rarely follows through with them to give a satisfying pay-off and instead oversaturates the film with quite a lot of slow-motion scenes that muddle the tension and barely disguise its bare bones underneath (seriously, we reckon we could shave off ten or so minutes in this 103-minute long movie by removing at least half of the slo-mo shots, which randomly show up in places like people walking on rooftops or climbing up stairs).

A lot has also been made of the film’s uncomfortable display of xenophobia, and it’s for good reason – according to this film, every Asian person who isn’t in a suit or laughing in a friendly manner is a murderous psychopath with severe anger issues, which we’re going to make a wild guess and say is a pretty stereotypical representation of Asian culture. None of the rebels are given any weight or even reasoning; here, they’re just evil and want to either murder, rape or psychologically damage American citizens because they’ve got nothing better to do (actually, like we said there is a reason behind the coup, but it speaks more to their severe need for anger management therapy rather than genuine political upset). Any scene that sees them carry out these acts so casually and without remorse is wildly unpleasant and does not make for an engaging watch as an audience member.

The family themselves are just as one-dimensional, and though Lake Bell is certainly trying to add more emotional depth to an underwritten part, Owen Wilson can’t help but feel somewhat miscast in the supposedly heroic role; every other scene, it looks like he’s wandered in straight from a Vince Vaughn comedy, and about to drop a punchline in a scene where humour is the last thing on people’s minds (it doesn’t help that a major set-piece sees him flinging his own children from one roof onto another in a bid to escape the attackers, and it comes across as a missing comedy scene that happens to have no comedy in it). Thank goodness that Pierce Brosnan, as a British tourist who the family encounters several times during their stay, including during the coup itself, swoops in to save the day with by far the more interesting character and performance, to a point where you’re wondering why we’re not watching a film about this guy and his own problems.

If this movie had taken a more traditional B-movie route, then No Escape probably would have been more fun to watch – but the fact that everything is taken so seriously until it just becomes unpleasant to watch leaves it as a product you’ll want to escape from sooner rather than later.

No Escape is mediocre action-thriller schlock, with the uncomfortable levels of xenophobia, one-dimensional characters and unpleasant shock violence and assault making it especially hard to watch.