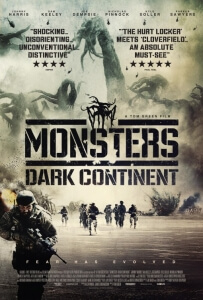 BASICALLY…: As the “Infected Zones” with mysterious large monsters spread worldwide, an insurgency in the Middle East leads to an all-out assault…

Five years ago, a relatively unknown director named Gareth Edwards left one hell of a calling card with his debut feature Monsters, which managed to splice an alien invasion story and a quasi-romance story together in unexpectedly captivating ways. Hollywood has been quick to recognise his potential, snapping him up to direct last year’s Godzilla reboot (and its forthcoming sequel) as well as perhaps his biggest score to date, the first in Disney’s planned Star Wars “anthology” movies entitled Rogue One.

As a result, his presence in the sequel to his breakout hit, now called Monsters: Dark Continent, is sorely and painfully missed.

This time acquiring an executive producer credit, Edwards has handed over the directing duties to Tom Green (and before you start having nightmares about Freddy Got Fingered, it’s an entirely different person), whose credits to date include mini-series Blackout and several episodes of the TV series Misfits. Though he may have slightly more experience than Edwards did when he made the first film, Green unfortunately lacks the gentle and atmospheric vision of his predecessor, which allowed its audience to become fully engulfed in this particular world with its choice pacing and steady character development. Here, none of that is present which is partly what makes it so disappointingly unbearable.

The film as a whole is thoroughly unpleasant, with an ugly and over-saturated visual style – with perhaps some of the most incomprehensible shaky-cam you’ll see this year outside of Taken 3 – and particularly loathsome main characters. Talking about that style, first of all, there seems to be a need by Green to present the gritty harshness of this world as seen by its military types, an area than honestly did not need to truly be explored after the first film wrapped things up fairly nicely. Put simply, if Edwards made Alien then Green is seeking to follow it up with Aliens, but this time the heavier focus on action doesn’t necessarily make for a better product, and that shows in his visuals which look like something even Neil Blomkamp would be wincing his eyes at, with the sickly beige colouring of the Middle East deserts and incessant camera work which wastes the visual effects work when we cannot even see what the CG creatures look like in full close-up.

The characters, too, are shockingly unlikable – from the moment we meet our younger comrades in a rundown Detroit, which somehow looks worse than the actual “Infected Zones” in the movie, they are a particularly loathsome and obnoxious bunch that you’re more than happy to see be swallowed whole or killed in other ways by those large creatures sooner rather than later. Even the ones that aren’t as gratingly annoying, such as Sam Keeley’s unquestionable lead Michael, are so bland and forgettable that any caring levels are non-existent; nothing is revealed about these people that give us any reason to feel bad for them, and after an early extended sex and drugs montage nearer the start you’re counting down the minutes until one or nearly all of them are killed in the most delightful of ways. There’s also Johnny Harris as a mentor figure who is meant to represent the heart of the movie, but any scenes that see him battling his own morality fall flat thanks to his own aggressive personality and beastly exterior.

Luckily, the majority of the obnoxious nature is relegated to its first half, and it eventually finds it footing once circumstances leave the characters stranded in the desert. That’s not to say, however, that the film improves as a whole; it’s still a dull thematic rehash of the first film, only this time it’s littered with endless war movie clichés and tropes, including the shouty and name-calling black army sergeant (that’d be Nicholas Pinnock, for those keeping track), the expendable nature of its personality-free young dimwits (when one character is shown becoming a father for the first time, it’s painfully obvious where he’s headed later on), and some type of existential journey for certain people who question their role in serving for their country and at what cost (something that Apocalypse Now, Lone Survivor, Platoon, Saving Private Ryan, American Sniper and other war movies from the top of our head have all done before, and much better).

Overall, it’s clear that Monsters: Dark Continent is a largely inferior sequel to Edwards’ predecessor – just watch that instead, and we guarantee you’ll have a much better experience.

Monsters: Dark Continent suffers hugely from Gareth Edwards’ departure from the director’s chair, leaving new helmer Tom Green to create an unpleasant and inferior follow-up filled with unlikable characters and a far too heavy reliance on old war movie clichés. Aliens, it is not.