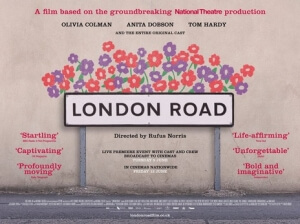 BASICALLY…: The residents of London Road in Ipswich, Suffolk, react to a series of murders within the community, and struggle to get things back to how they were…

Musicals have taken inspiration from many things such as books, movies and even singers’ back catalogues – but a series of murders, committed within the vicinity of a small Suffolk street? London Road certainly takes the cake on that one.

Prior to being made into a film, or anything else for that matter, writer Alecky Blythe interviewed several residents of the titular street around the time when serial killer Steve Wright murdered five prostitutes and was later arrested and put on trial. Blythe, along with composer Adam Cork, then reworked their exact words into lyrics that even managed to match their original speech patterns – you can hear every “um” or “ah” ever uttered, straight from the transcript and into the score. The resulting musical was then staged at National Theatre for a brief but prosperous run, receiving endless praise and an eventual transition to the big screen.

Rufus Norris, the original director of the stage production, lends his hand at film directing here, and is able to transition the musical from stage to screen competently, in doing so making a film that stands well enough as its own thing – though one wonders what the original stage production might have looked like, and how it may have differed. Norris uses the tools of filmmaking to better express his vision – for example, there are a few instances where we fade in and out of the same location, whether it’s the front of a boarded-up house or as a living room is packed away. The passage of time is represented strongly here, and especially in that latter instance it is used to silently stirring effect.

Along with Norris, the majority of the production’s cast reprise their roles as the various residents, with a few notable exceptions. Olivia Colman, for one, has a major role as a concerned mother who becomes a pivotal figurehead in getting the community’s spirits back up; while Tom Hardy has a brief appearance as a taxi driver with an unnerving obsession with serial killers (and when we say brief, we bloody well mean it; he’s literally in two scenes, one of which he doesn’t even say anything). Both are fine, understated performances and they handle their singing fairly well – Hardy doesn’t have the strongest voice, but at least he isn’t doing a Russell Crowe here – but the real standouts are the ensemble cast. Not only do they absolutely nail the naturalistic and precise lyrics that Blythe and Cork have concocted together, but they work wonders with the quieter moments too, which allow you to truly feel their sorrow and shame around the events that have occurred. It works especially well since there isn’t one cast member singled out as the absolute main character; this is very much an ensemble piece, which helps to establish the theme of communal spirit even more powerfully.

As with the stage show, the songs and how they are written and performed are nothing short of spectacular. It is very clever how each lyric is rhythmed exactly to the tune of the original voices, which are played over the end credits, and even lends itself to some darkly comic moments – one song centres itself around a news reporter messing up his lines, struggling whether or not to use the word “semen” in his description of the killer’s attacks – as well as some joyful and uplifting ones, such as a later number detailing neighbours’ flowers for an upcoming street event. Each song even has its own sense of choreography, which gives it that odd reality of people suddenly dancing about in perfect synchronisation and then shortly after going about their business as is usual in film musicals. That does admittedly take away a small fraction of its grittiness and the serious themes it is trying to get across, but doesn’t remove them entirely.

Don’t expect much in terms of traditional storytelling, including proper characters or even that much of a story – the film mostly focuses on the reactions of these neighbours and how they work themselves back to a strong community, which may not sound particularly exciting but it’s still worth watching BECAUSE of that. It’s a very experimental kind of musical, as it was when it originally debuted on the National Theatre stage, but London Road is an experiment that more or less pays off to deliver an exciting and new style of lyrics as well as set a new bar in terms of naturalism in a universe where everyone sings and dances.

London Road, like its stage predecessor, has an absolutely fantastic set of music and lyrics that are truly original and naturalistic, matched with a fine ensemble performance and an uplifting communal spirit.