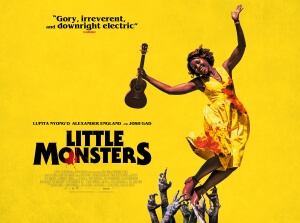 BASICALLY…: During a field trip, a kindergarten class gets caught in the middle of a zombie invasion…

Unlike some actors whose careers have stalled somewhat following an initial Oscar win, Lupita Nyong’o has shown no signs of a post-Oscar slump. If anything, her star had grown even bigger thanks to appearances in big blockbusters like Black Panther, The Jungle Book and Star Wars: The Force Awakens, and this year alone she gave a performance worthy of another Oscar in Jordan Peele’s Us; with all those and more to her credit, she is definitely on her way to disproving the common notion that anyone who succeeds on Hollywood’s biggest night has peaked.

Her sparkle continues to shine as she headlines her first comedy, and she’s certainly picked an interesting one to show her funny side, to say the least.

Little Monsters, the latest film from Australian actor turned filmmaker Abe Forsythe, doesn’t see Nyong’o come in until about the ten-minute mark; our main focus is actually on Dave (Alexander England), a bitter and foul-mouthed musician who’s in a bad mood and crashing on his sister’s sofa after a hard break-up. It’s only when he begrudgingly accompanies his young nephew Felix (Diesel La Torraca) to kindergarten that he meets his teacher Miss Caroline (Nyong’o), who Dave becomes so taken by that he impulsively volunteers to chaperone the class’s upcoming trip to the local petting zoo just to be near her. Unfortunately, the trip coincides with a zombie outbreak at a nearby US testing facility, and soon the whole farm is overrun by the undead, leaving Dave and Miss Caroline – along with obnoxious children’s television presenter Teddy McGiggle (Josh Gad) – to protect the young children from danger.

Yes, it’s another one of those zombie comedies that seem to come every couple of years, as a belated response to the likes of Shaun of the Dead and Zombieland, but this one is definitely one of the better ones to emerge in recent years. For one, it is genuinely sweet and surprisingly adorable; in the midst of all the standard zombie gore is a nice story of people learning to be kinder to themselves as much as they are to others, fuelled by a couple of very likeable performances by both Alexander England and especially Lupita Nyong’o, whose warmth and overall positivity shines as bright as the yellow dress she wears for the majority of the film (even when it’s completely soaked in blood). The young children they are assigned to protect are also incredibly cute, with reactions that feel genuine and genetically designed to make you go “awwww” every time they say or do something adorable; in fact, the somewhat loose feel of the young kids’ performances almost makes it feel like a spiritual successor to Nativity! (which immediately makes it a far superior follow-up to any of the actual Nativity! sequels).

Despite a warm and cuddly heart with perhaps the most endearing use of Taylor Swift’s “Shake It Off” in cinema, the movie does have a small number of shortcomings. It stumbles, funnily enough, whenever it decides to be a zombie movie; the undead themselves are just standard slow-moving zombies (characters in the movie even ask if they are slow or fast), without much variation added to them to make them interesting, and the make-up isn’t even strong enough to fully convince that they are indeed from beyond the grave (tellingly, a young member of the kindergarten class even says that the monsters don’t even look real). There is also the matter of Josh Gad, who himself doesn’t do a bad job (he even gets a couple of decent laughs), but is stuck playing a character that is not just unnecessary, but also a very unoriginal retread of characters you may have seen in other things. He’s playing a children’s television presenter who – guess what – hates children and couldn’t be any further from his screen persona, which already makes you think of characters like Krusty the Clown who have similar set-ups and are just better-written types of this caricature; on top of that, the film really does treat him like a third-wheel at times, to a point to where you wonder why this character is even a part of this story, when even the young kids contribute more to the plot than he does.

Though it’s certainly not perfect, and far from even being in the same league as other zombie comedies like Shaun of the Dead, this is a film that does have its heart in the right place, and is carried so well by a couple of very charming actors as well as some impossibly cute kids that even the more glaring faults can be overlooked in the moment. As for Nyong’o, with both this and Us just in this year alone – not to mention her involvement in next month’s Star Wars: The Rise of Skywalker – she has definitely hired a pretty great agent, who has gotten her work that allows her to show the very best sides of her as a performer, while also exploring newer sides that surprise audiences as much as they surely surprised herself.

One of those new sides, apparently, is signing nursery rhymes to both children and zombies on a ukulele, a talent nobody could have predicted would come in handy until Little Monsters, but I suppose it’s fitting with today’s more unpredictable times.

Little Monsters is a sweet zombie comedy that’s supported by a warm heart and a couple of charming performances by Lupita Nyong’o and Alexander England, as well as some impossibly cute children who also help to carry the movie above some of its more flawed aspects, including its standard depiction of zombies and a turn by Josh Gad which the movie would’ve done just fine without.

Want to decide what the movie’s like for yourself?
Check out Little Monsters showtimes in London
via